Liberian President George Weah was seen embracing his son and USMNT winger Tim Weah after the US’ crucial 1-0 win over Iran on Tuesday, as the Americans progressed to the World Cup’s Round of 16.

The 22-year-old was seen wearing a FIFA-sponsored orange bib when he met his father and mother, Clar, in the tunnel of Al Thumama Stadium in Doha, after being subbed in the 82nd minute for center-back Walker Zimmerman.

‘The final comeback,’ George told his son while giving him a hug and a pat in the back for his contribution in leading the US to finish in second place of Group B.

It was only last week when Tim scored the Star and Stripes’ first goal of their World Cup campaign in a 1-1 draw against Wales. On Tuesday, he thought he had scored his second goal of the tournament, only for his strike to be chalked off for offside.

He has also started all three of the Red, White and Blues fixtures in Qatar and will surely look to keep his spot in the Americans’ starting XI against the Netherlands on Saturday in the Round of 16. 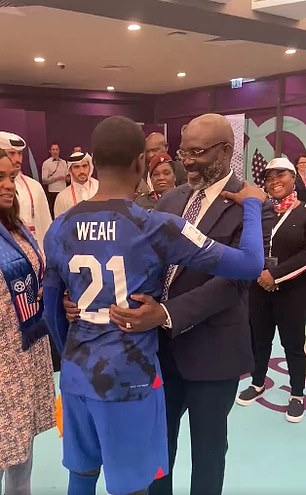 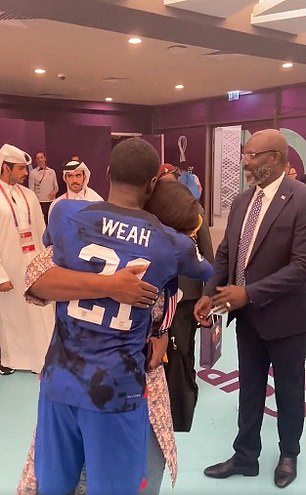 Liberia’s President George Weah embraces his son, Tim, after the US qualified for the Round of 16 at the World Cup following a 1-0 win over Iran on Tuesday 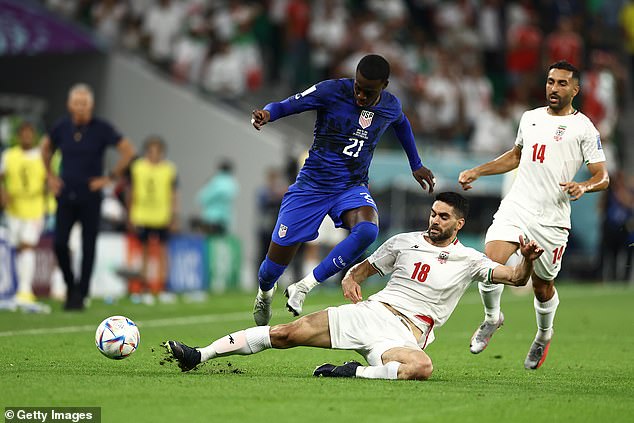 Weah started for the US for the third World Cup game in a row, playing in all Group B games

‘We worked so hard as a group to be in these types of positions and Iran played a beautiful game,’ Weah told Fox Sports after Gregg Berhalter’s young side got their first win at the World Cup.

‘But, you know, thanks to Christian, he put it away and got hurt in the process, but we love him and thank him and we’re through. So, it is a great feeling.’ 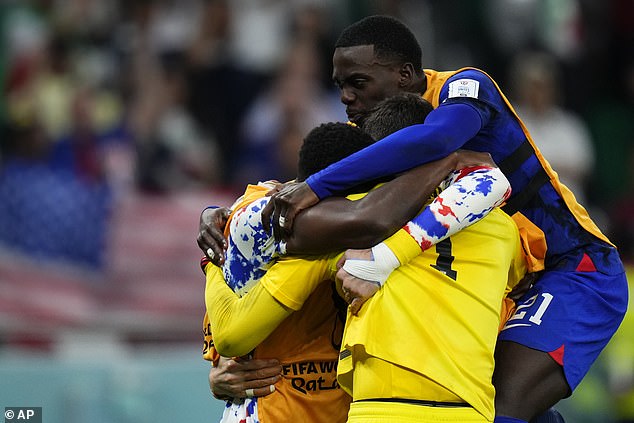 Weah, 22, celebrates with teammates after the final whistle of the US-Iran match was blown 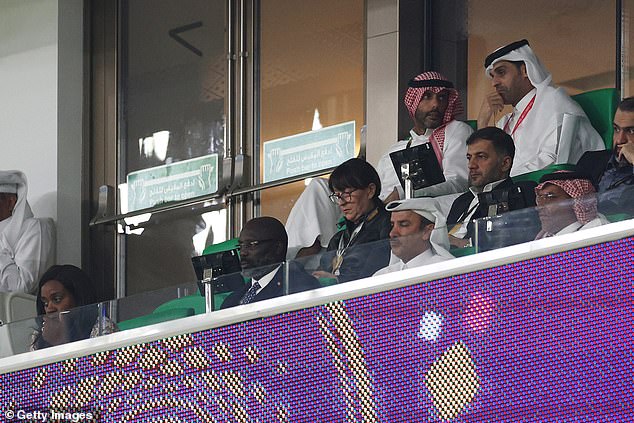 George Weah, President of Liberia, watches his son play from the stands during Iran vs. USA

The tricky winger, who plays for Ligue 1 side Lille OSC, was born in New York while his father was still a professional player.

The winger made his debut for the US in 2018 and is the first member of his family to play at a World Cup, as George never got to feature at soccer’s biggest stage for Liberia.

The Liberian President is one of the greatest players to come out of Africa and is still the only African to win the Ballon d’Or.

He played as a forward for Paris Saint-Germain and AC Milan during an 18-year club career. His final appearance for Liberia was in September 2018 when he made a surprise appearance in an exhibition game against Nigeria at the age of 51, a year after he’d been elected as the country’s leader.

‘Congratulations,’ Brazilian legend Pele wrote to Tim, who had dedicated his goal against Wales to the US and his father’s native Liberia. 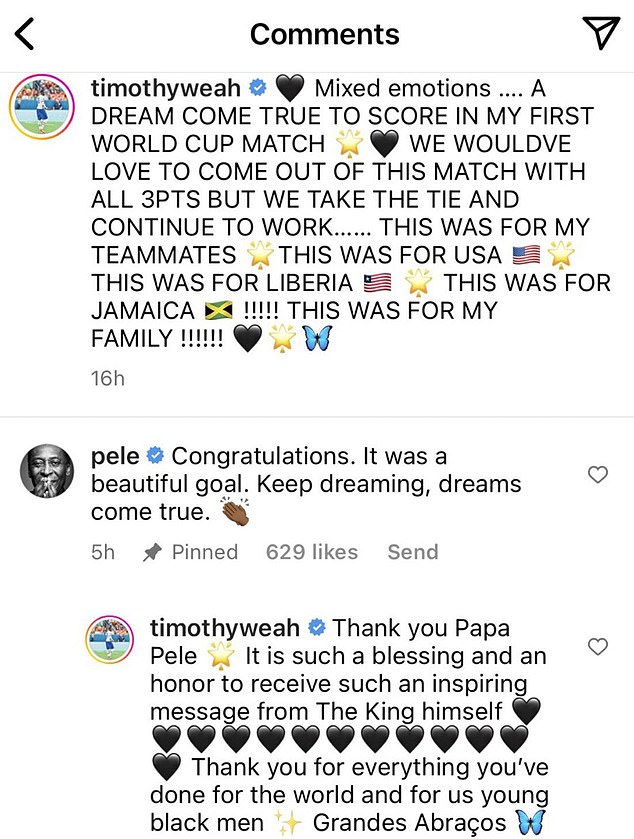 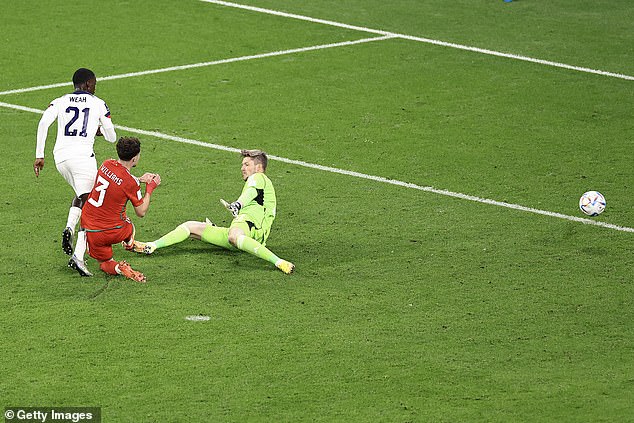 Weah will claim his goal against Wales over his father, who never got to play in a World Cup

Referring to him as ‘Papa Pele,’ Tim responded to the soccer great by thanking him for the ‘inspiring message.’

‘Thank you for everything you’ve done for the world and for us young black men,’ Weah wrote, adding ‘Grandes Abraços,’ which means ‘big hugs’ in Portuguese.

Timothy was then asked about the exchange on Good Morning America. 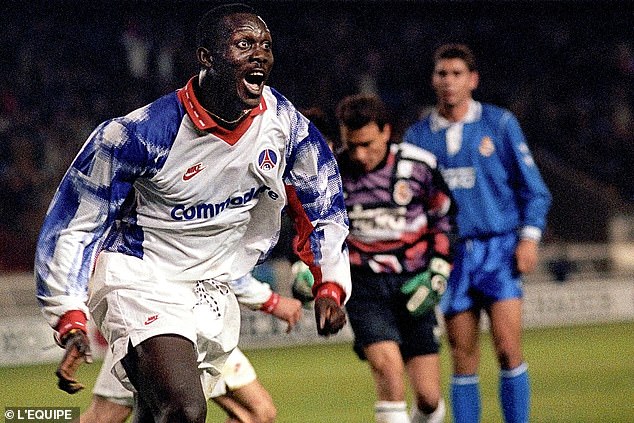 Recipient of the Ballon D’Or in 1995, George Weah is the only African player to have ever won the prestigious prize. He played for PSG (pictured) and AC Milan during an 18-year club career

‘It meant the world to me,’ he said. ‘I mean, getting a message from one of the greatest to ever do it is an amazing feeling. I feel blessed to even be in the position where he, you know, felt the need to give me that type of encouragement.

‘I love him and, you know, dreams do come true, so whoever is watching this, all the little boys and girls out there, make sure you believe in yourself and your dreams will come true one day.’

Tim was also asked about growing up in Rosedale, Queens, a suburban area of the New York borough.

‘Small town boy, came from Rosedale, you know, it’s a very community vibe,’ he said. ‘Shoutout to everyone there. I want to thank them for, you know, always pushing me to be the best I can be. I know I’m representing a whole group of people and representing the community. I love you guys and I can’t wait to come back home and celebrate with you guys.’