‘It was a good slap in the face’: Tomas Soucek believes West Ham’s defeat at Wolves can help top-four bid and insists Hammers can beat Manchester City AGAIN on Sunday

Tomas Soucek believes West Ham got the ‘slap in the face’ they needed to keep them focused on maintaining their superb start to the season.

The Hammers can go level on points with Manchester City at the Etihad Stadium this afternoon, three days after David Moyes’s side booked their place in the knock-out stages of the Europa League.

It was the ideal response for the Hammers, who had slumped to a disappointing defeat by Wolves in their first game after the international break. 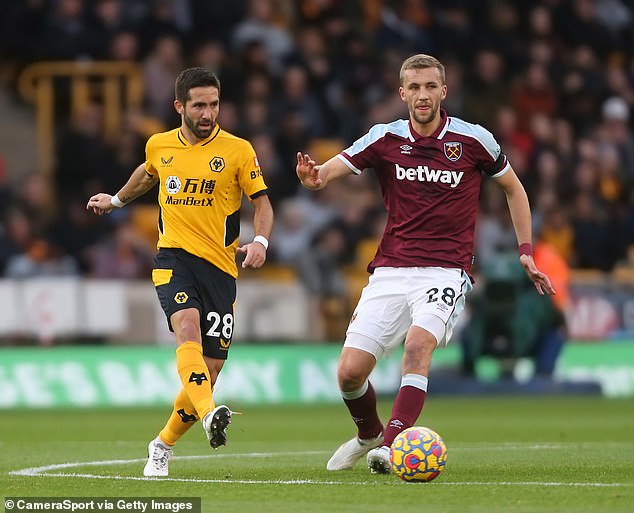 Czech midfielder Soucek believes it was probably what the side needed with games against City and Chelsea coming up in their next three games.

‘We didn’t play well at Wolves, we didn’t deserve to win,’ said Soucek. ‘Maybe it was a good slap in our face, that we need to be prepared for every game. We showed in Europa league that we have come back well and now, hopefully, we can show the same at Manchester City.’

They have done so against this opposition before. It was West Ham who ended City’s hopes of wining a fifth straight League Cup with their penalty shootout victory a month ago.

‘We played very well,’ recalled Soucek. ‘Manchester City didn’t create a chance against us, maybe only one or two. We defended very well. We would like to play against them in a similar style. It is good for us that we beat them because it gives us confidence for Sunday.’ 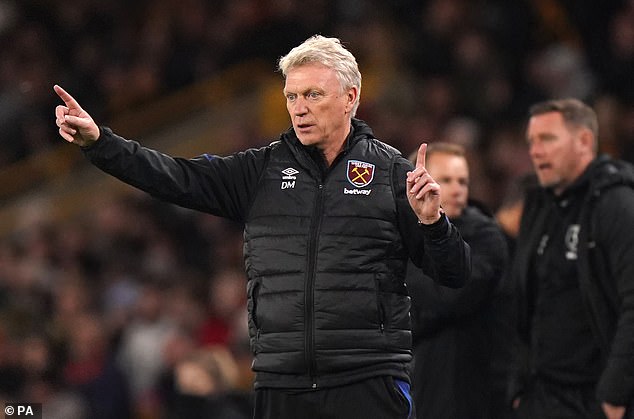 David Moyes has taken the Hammers to fourth in the table, to the knockout stages of the Europa League and to the quarter-finals of the Carabao Cup

The job that Moyes is doing at West Ham is ever more impressive when you consider their performance on domestic and European soil. Europa League football is supposed to be a curse for club’s of West Ham’s size yet they continue to march on both fronts, in the top four, as well as being in the quarter-finals of the Carabao Cup.

‘We want to go for all three competitions — and then a fourth one in January (FA Cup),’ said Soucek. ‘We want to be successful but it is about the next game, always. Especially now, we play City away, we play Brighton in midweek, then play Chelsea. This is one of the hardest weeks in the Premier League season. After this, we can say where we are!’

Soucek, meanwhile, has faced criticism for his form in recent weeks. Moyes, too, revealed he was barking instructions at the midfielder to get further forward during the victory over Rapid Vienna. 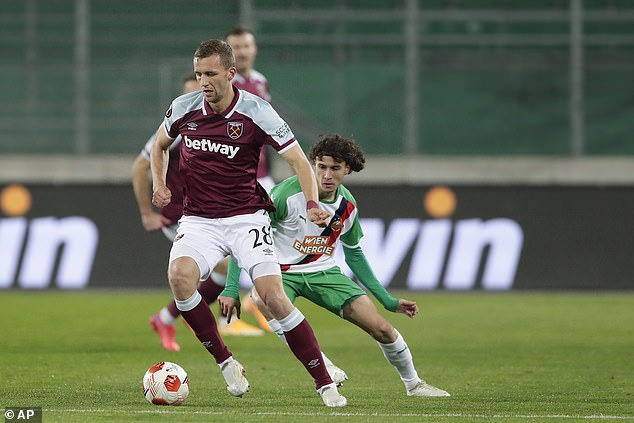 Soucek has struggled for form this season, scoring just once after bagging 10 goals last term

Last season, Soucek bagged 10 goals for West Ham yet has mustered just a single strike for the club this campaign on the opening day against Newcastle.

‘It is not just about goals,’ said Soucek. ‘Last season, it was great for me with scoring goals. I had a lot of luck many times! Now, maybe sometimes I will be disappointed with my finishing but I am happy for the team.

‘I am more of a team player and if we are fourth in the table, we are top of the Europa League group, we are still in the League Cup. For me that is the best. If we continue in this way, I don’t need to score any other goals.’

It was Soucek’s midfield partner Declan Rice who stole the headlines last week when the England star sang his own version of Vanilla Ice’s song ‘Ice Ice Baby’ — remixed to his own lyrics of ‘Rice Rice Baby’ — to more than 75,000 people live on Twitter. 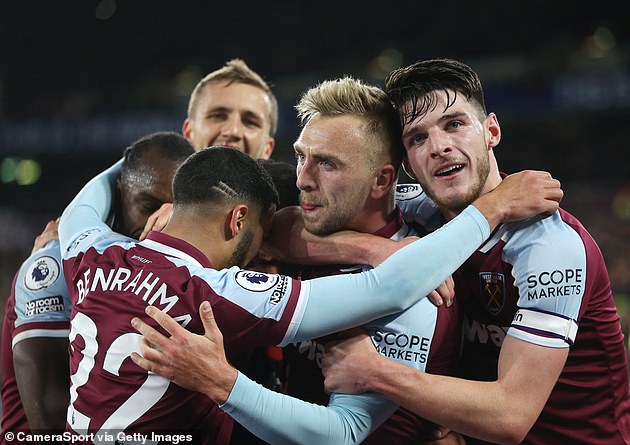 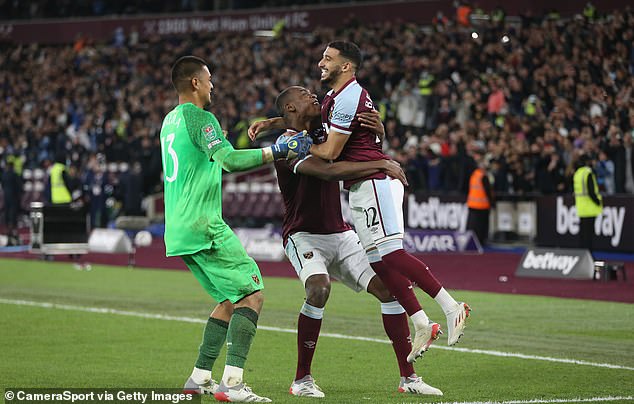 This was nothing, assured Soucek, that he hadn’t seen in the flesh many times before. ‘I am with him in the training ground every day and I can see how he performs from two metre away,’ he said. ‘I have the best ticket available to see his performances.

‘He likes to dance and sing. He can sometimes join in with Micky (Antonio) who is next to me as well. It can maybe be a good duet next time.’

A trio, perhaps? A laugh and a shake of the head. ‘I am more the person who can clap my hands and be a fan of their music!’

Who should be Man Utd No 1 next season? De Gea out for Henderson or Romero? The Big Debate