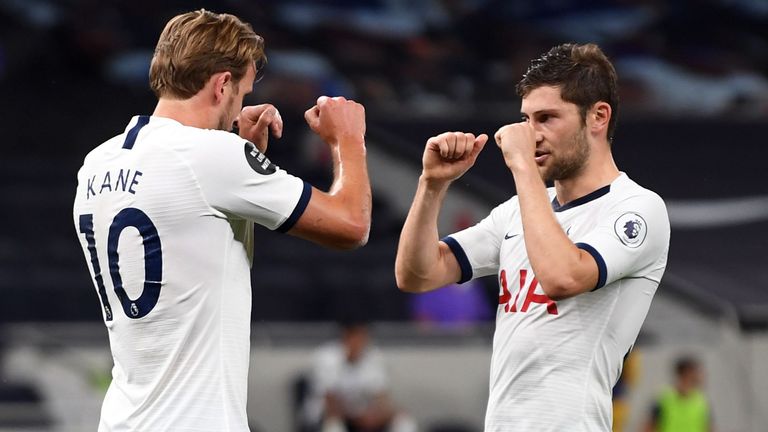 Tottenham eased to a 2-0 win over West Ham at the Tottenham Hotspur Stadium on Tuesday, but who were the top performers?

Tomas Soucek’s own goal broke the deadlock midway through the first half, with Harry Kane adding a breakaway second in the closing stages.

Read on to see how we rated the players out of 10. Sharp in the opening minutes to deny Antonio but barely called upon thereafter.

Listed as a right-back but lined up as a right winger whenever Tottenham had the ball and provided plenty of danger as he raided forward. Just a shame about the absent end product.

Did nothing particularly wrong, but the doubts remain – such as when he was inexplicably slow to shut down Fornals when West Ham created their best chance prior to Soucek’s unfortunate own-goal.

His ongoing selection ahead of Toby Alderweireld and Jan Vertonghen points to Dier becoming a firm favourite with Mourinho. After the frenetics of his Friday night against Manchester United, this was a far more subdued outing, although his run and shot at the start of the second half very nearly delivered a highlight.

It would have been part of the plan but the contrast between the deep-sitting, tucked-in Davies and liberated Aurier was stark throughout. Did his job – or so we have to assume.

So very nearly the villain of Tottenham’s evening with the needlessly rash concession of the free-kick which resulted in Bowen rattling the post five minutes before Kane secured victory. Otherwise, Sissoko was safe and secure in front of Tottenham’s defence, giving a platform for their attackers and security for Aurier to raid forward. Selected ahead of Harry Winks alongside Sissoko and grew as the game went on. Although Tottenham’s midfield generally lack a spark of creativity it was Lo Celso who set up Harry Kane for his most presentable opportunity of the evening and the youngster’s composure in carrying the ball forward continued to impress.

Dangerous whenever he received the ball – which, from Spurs’ perspective, wasn’t often enough while they adjusted to their new shape. Demanded a flying save from Fabianski when a sharp turn was followed by a rasping long-range drive but then squandered a great opportunity on the stroke of half-time and, with his contribution dwindling, was substituted with 20 minutes to go.

Rusty. Plenty of endeavour on his comeback but struggled to make a firm impression on proceedings before being replaced after an hour. Denied an opening goal by a tight – but reasonably obvious – VAR offside call and the sense persisted throughout that Son wasn’t entirely comfortable wide on the left. But with so many attacking options now at Mourinho’s disposal, and Harry Kane so wedded to the centre, it’s a position he may have to grow used to.

The feet still look a little heavy but the Tottenham skipper appeared far sharper this midweek than he was against Manchester United on Friday night. A snapshot from distance straight at Fabianski, a header over the bar, a flick into the onrushing West Ham goalkeeper, a curler just over the bar. The next moment was one to forget – a left-footed shot wide from short distance – but the goal was coming, and so it proved when he ran clear to seal victory.

Replaced Alli and was close to scoring within minutes of his introduction, firing high into the side-netting.

On for the final 20 minutes but didn’t shine as brightly as Lamela in his cameo.

Given a very brief run-out at Son’s expense.

Had an awkward moment early on, almost allowing a Son cross to creep into the net, but recovered swiftly and made important saves from Lucas Moura and Kane. Had no chance with Soucek’s own goal and beaten by Kane for the second.

The right-back was fortunate to see Son’s first-half strike ruled out by VAR after he failed to get close enough to the Spurs man. 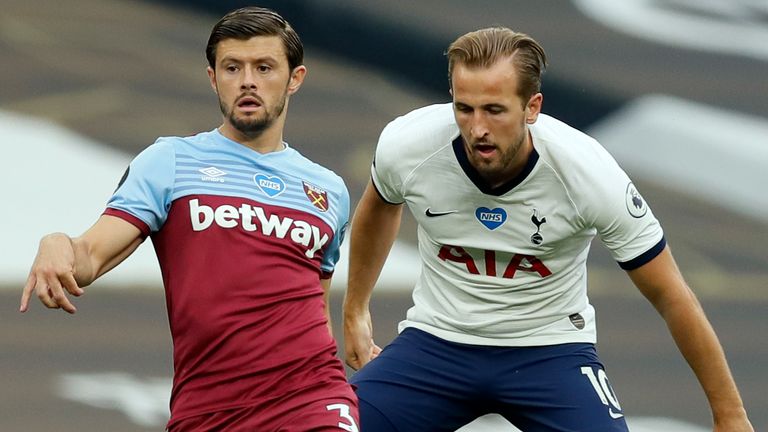 Made more clearances than any other player on the pitch (10) but his passing was poor and he couldn’t keep up with Kane for Tottenham’s second goal.

Had some good moments in the first half, cutting out a dangerous Aurier cross and reaching a Kane through-ball before Alli could run through on goal, but was flat-footed for Tottenham’s opener, offering little in the way of an aerial challenge.

Had a difficult evening up against the overlapping Aurier on West Ham’s left-hand side and had few opportunities to get forward himself.

Covered plenty of ground in central midfield, making some important interceptions in front of the West Ham defence, but at fault for the decisive goal, getting his legs in a tangle and diverting the ball into his own net.

Allowed Moura to get away from him for one early Spurs chance but had some eye-catching moments on the ball, skipping away from Sanchez and firing off a goalbound shot which was blocked, then picking out Antonio with an excellent long pass.

Not a great night for the West Ham skipper, who was booked for a first-half foul on Lo Celso and substituted after an hour. 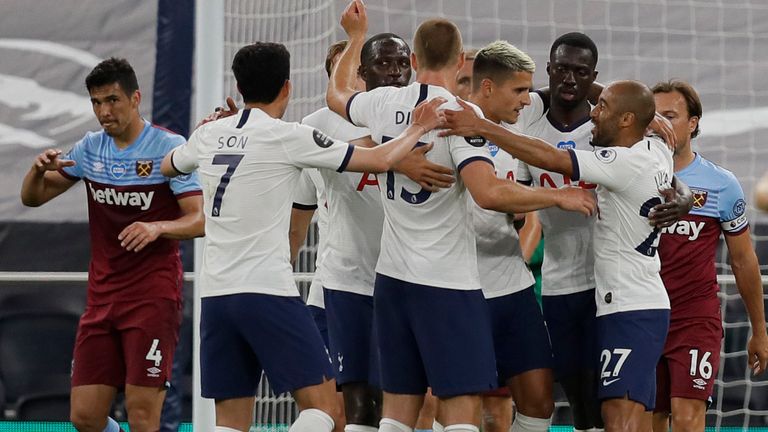 Worked hard defensively, tracking back and helping out the Hammers’ defence, but missed a good chance early in the second half and was otherwise anonymous going forward before his second-half substitution.

West Ham’s most dangerous player. Bowen, a January signing from Hull, was a persistent menace on the visitors’ right flank and struck the outside of the post with one effort in the second half.

Battled gamely as West Ham’s lone centre-forward but had little service for much of the contest and spurned his best chances when he blasted over from Rice’s long pass and failed to direct a close-range header on goal following a corner.

A good option to call from the bench but struggled to assert himself.