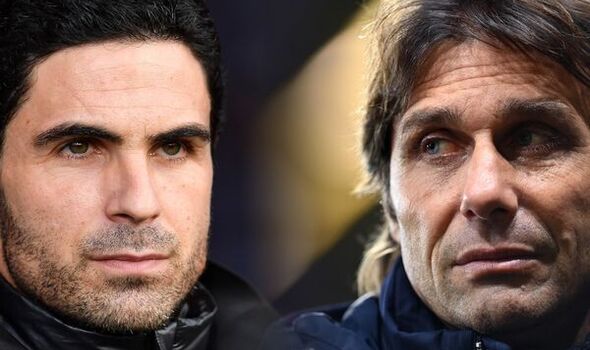 Tottenham have aimed a pointed dig at Arsenal over the successful request to postpone their fixture back in January ahead of Thursday evening’s titanic clash between the two great rivals. With only three games each left to play in the Premier League this season, Spurs sit four points behind the fourth-placed Gunners.

It means that if Mikel Arteta’s side get a win in N17 tonight they will guarantee their qualification for next season’s Champions League. A Spurs victory, however, would leave everything still to play for going into the final week of the campaign.

This fixture was initially due to be played at the start of the year. However, Arsenal controversially appealed to the Premier League to have it pushed back due to a depleted squad as a result of a small number of Covid cases and squad members being absent at the Africa Cup of Nations.

It was a decision which left Spurs boss Antonio Conte furious – and the club have now made reference to the postponement with a sly message in a pre-match video they posted on their social media feeds.

The video begins with a series of messages from Spurs fans on Twitter building up to the mammoth occasion. But that is then followed by text which reads: ‘We were ready in January.’ It concludes with: ‘We are ready now. COYS.’

Tensions are likely to be high ahead of kick-off, and Conte stoked the fire even more when asked to reflect once again on Arsenal’s withdrawal from January’s game. “For sure, it was very strange that our game was postponed for Covid and Arsenal didn’t have one player with Covid,” he said in his post-match press conference.

“We lost a game 3-0 [to Rennes] because Premier League didn’t want to move our game when we had nine or 10 players with Covid. At that time, it was unfair what happened, but now this is the past and we have to be focused on the present and try to get the best result.”

“I think this could be a good chance for us to get three points against their whole team because if we played in January they were without many players because they were committed at the African Cup [of Nations] and injuries. I think football is wonderful. Also this type of game it’s right to play with two teams and all the players available.”

“Now we have to be proud that after a difficult season in many aspects for the club, we’re in this race. In my opinion, in my mind, it’s always a failure when I don’t win, because I’m used to fighting for something important, to have a chance, yes to have a chance to compete with other teams to win trophies and titles.