Tottenham survived a scare after blowing a 2-0 lead at Wolves to squeeze through in the Carabao Cup on penalties.

Ruben Neves, Leander Dendoncker and Conor Coady missed in the shoot-out as Spurs progressed 3-2 following a 2-2 draw at Molineux.

They almost let the game slip through their grasp after Harry Kane and Tanguy Ndombele put them in charge only for Dendoncker and Daniel Podence to haul the hosts level.

Back-to-back Premier League defeats to Crystal Palace and Chelsea and a draw at Rennes in the Europa Conference League had put the brakes on Spurs’ winning start under Nuno Espirito Santo.

But last season’s runners-up reached the fourth round ahead of Sunday’s north London derby with Arsenal.

Wolves continue to struggle for results under Bruno Lage and their night started badly when Yerson Mosquera’s debut lasted just eight minutes before he was carried off with a suspected hamstring injury.

Coady replaced him but just five minutes later was caught out by Ndombele for Spurs’ opener.

The impressive Oliver Skipp won a crunching tackle with Neves and Ndombele’s heavy touch allowed the ball to run free for Coady.

There appeared little danger but Ndombele charged down his clearance to race into the area, turn Willy Boly and roll under John Ruddy.

Spurs were threatening to open Wolves up at will and Alli almost added a third before he ran out of room while Giovani Lo Celso slipped when well placed.

The hosts were comfortably second best but, with Molineux getting restless, pulled a goal back seven minutes before the break when Dendoncker headed in Rayan Ait-Nouri’s corner.

Totally out of the blue Wolves had given themselves a lifeline with their first home goal of the season and were unsurprisingly lifted.

But Ndombele, having scored his first goal for nine months, was hunting a second and he drilled over from a tight angle to highlight Wolves’ fragility at the back.

Adama Traore, wanted by Spurs in the summer, replaced the ineffective Fabio Silva at the break and the hosts immediately went hunting for a leveller but their penalty claims were ignored after Ndombele caught Hwang Hee-chan as the striker fired over.

Ruddy then saved from Kane as the striker tried to smuggle the ball past him but was almost embarrassed when he fumbled a routine stop from Ndombele, the ball flying over to spare his blushes.

Wolves were growing in confidence, though, and equalised after 58 minutes.

Ndombele was guilty of losing the ball to Hwang and Dendoncker fed Podence to comfortably beat Pierluigi Gollini. 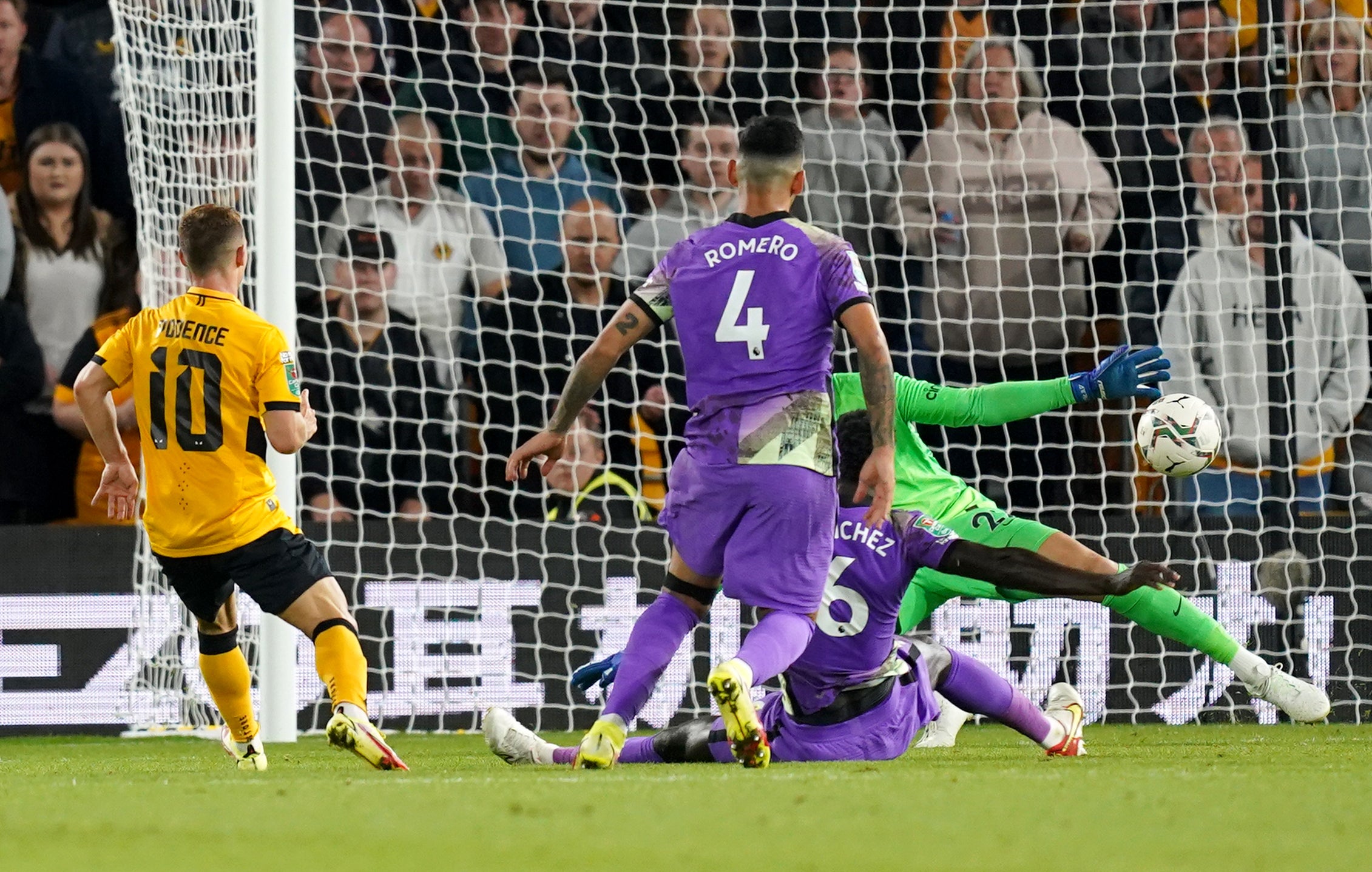 Comeback complete, Wolves needed to rely on Ruddy to ensure they remained level when Son Heung-min’s cross found Kane but the goalkeeper’s reaction stop turned his header over, although the England captain should have never given him a chance.

Penalties loomed but Neves almost won it for Wolves when his deflected effort dropped onto the bar with two minutes left.

But neither side could find a winner and Neves sent his penalty over before Gollini saved from Dendoncker.

Ruddy stopped Pierre-Emile Hojbjerg’s effort but Coady smacked his effort against the bar to send Spurs through.