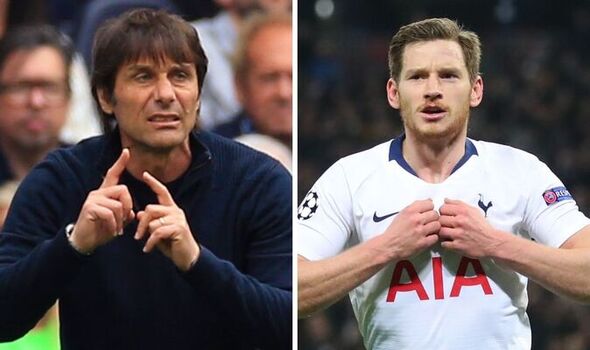 Antonio Conte could be set to get his very own ‘Jan Vertonghen’ with Fabio Paratici reportedly pushing Tottenham to sign Alessandro Bastoni. Spurs secured Champions League football for next season after a dramatic final few weeks to the campaign.

Football.london claim Conte wants someone to compete with Wales international Ben Davies. The report names Bastoni as the top target for both Conte and Paratici with the centre-back seen as one of the best young defenders in world football.

Spurs officials reportedly regard Bastoni as an ‘heir to Vertonghen’ due to his ability on the ball. Striking a deal with Inter may well be Conte’s first true test of whether Tottenham will back him in the market though.

It is claimed the Serie A side want at least £51million with Tottenham also likely to be in the market for a second central defender. Finishing inside the top four has seemingly convinced Conte to stay at the club and lead their charge up the table.

But the Italian coach will now want to be backed in the summer transfer window. Two new arrivals are already on their way with deals reportedly in place for both Ivan Perisic and Fraser Forster.

Cristian Romero impressed in his debut campaign at Tottenham while Conte is also a big fan of Eric Dier. Davies was utilised as the left-sided centre-back for most of the campaign under Conte and his position is set to be challenged.

Davinson Sanchez, Japhet Tanganga and Joe Rodon all face uncertain futures this summer and replacements will be needed if any of them leave. Sanchez was Tottenham’s former club-record signing when he joined for £42m back in 2017.

He’s since struggled for regular minutes, although he did start in all three of Tottenham’s final games of the season to help secure Champions League football.

Mauricio Pochettino reveals he intends to stay at PSG next season