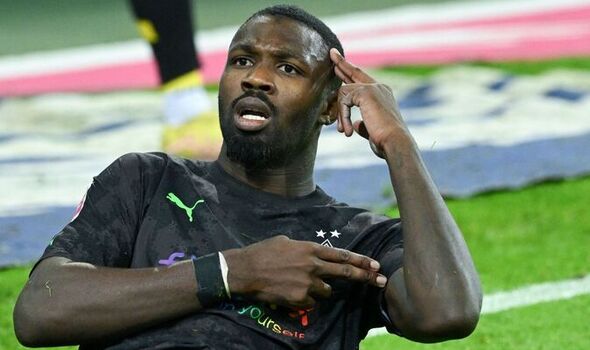 Borussia Monchengladbach are ready to sell Marcus Thuram for just £8.7million in January – handing Tottenham a potential opening in their search for another winger for Antonio Conte. Fabio Paratici is set to prioritise the capture of another wide forward in the winter market after Spurs experienced a major blip when Dejan Kulusevski and Richarlison were recently sidelined through injury.

The double act had both made impressive starts to the season before their fitness problems which created an extra reliance on Harry Kane and Heung-min Son.

Son’s facial fractures – sustained in the gritty Champions League win at Marseille – meant Kane was the club’s only first-choice attacker available for Conte prior to the mid-season break.

Kulusevski soon reminded Tottenham fans of his quality when he made an instant impact from the bench against Liverpool.

Tottenham have previously considered a move for France international Thuram, who will be free to speak to foreign clubs in 2023.

His contract is due to expire at the end of the season meaning Gladbach are reluctant to lose him on a free transfer.

According to Bild in Germany, the Bundesliga outfit are ready to cash in on a cut-price deal in January – which could present a golden opportunity for Spurs to improve their squad.

Thuram has been on fire for his club side this season, netting 10 times in 15 Bundesliga outings.

His rich vein of form saw him earn a late call-up to Didier Deschamps’ France World Cup squad as he became the final player to earn a place in the 26-man travelling party for Qatar.

The 25-year-old is the son of former World Cup-winning defender Lillian, who lifted the trophy with Les Blues in 1998.

A swoop for Thuram was considered in the summer transfer window before Tottenham decided to prioritise other areas of their squad.

But now there will be extra focus on padding out the depth within their ranks given their recent struggles in the Premier League.

Spurs have now lost four of their last eight top-flight matches after suffering their first defeat of the season on October 1 in the north London derby against Arsenal.

Manchester United, Newcastle and Liverpool – three direct rivals in the race for the top-four – have all taken three points from Spurs in the past month.

Tottenham have also since been dumped out of the League Cup following a 2-0 defeat at Nottingham Forest.

With Conte still yet to commit to a new contract, there will be growing concern over the Italian’s future should his players fail to deliver when the Premier League returns on Boxing Day.

Bryan Gil, who had agreed to rejoin Valencia (loan) on transfer deadline day before a deal collapsed, could depart on loan in January should Tottenham land a replacement.