Sevilla manager Julen Lopetegui has confirmed declining the chance to become Tottenham Hotspur’s new manager, in the latest blow to the Premier League side’s failing recruitment search. Spurs have been attempting to replace Jose Mourinho since his departure in April and have suffered a number of embarrassing U-turns from prospective candidates.

Talks with Antonio Conte and Paulo Fonseca broke down at the final stages, while the Lilywhites are also believed to have missed out on the likes of Julian Nagelsmann and former boss Mauricio Pochettino.

Latest news from Spain has now made clear that Lopetegui can be added to the list of names to pass up on the job, after he admitted to rejecting the opportunity to move to the club.

“Tottenham? I am where I want to be. I could have had options,” he told Radio Marca. 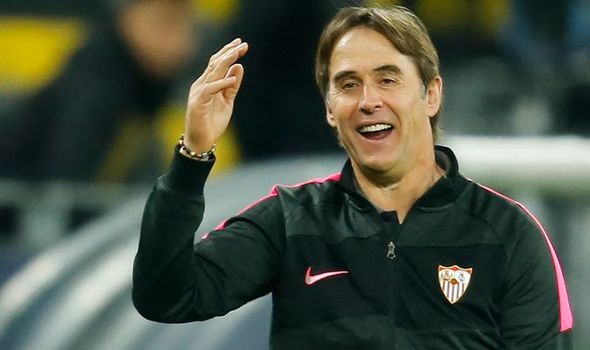 “We’re focused on that; we’re not looking elsewhere. I still have a lot of objectives to achieve.

“The main one is to be able to constantly improve the team, and then the profession gives you different challenges.

“Now my dream is to make Sevilla better, more reliable and to respond to all the excitement of Sevilla fans.”

Sevilla chairman Jose Castro also confirmed this claim after claiming Lopetegui phoned him regarding a ‘dizzying’ offer from Tottenham.

“Julen rang me and told me. He said he’d received offers he’d not listened to in addition to a dizzying one from Tottenham. But he said he doesn’t forget things and that he is very motivated here. We believed and believe in him, giving him a two-year contract extension, and I’m sure he will bring much more to the club,” said Castro.

“You see his ability and leadership every day. Some coaches are more driven by economic factors but Julen is very clear that he is happy here and he even said it would be very difficult to find a better place to work than here.”

Lopetegui signed a new two-year contract extension at the La Liga side earlier this year, being rewarded for the progress he has made at the club.

The former Spanish national team manager guided Sevilla to fourth place in the league in his first season in 2019/20, as well as claiming the Europa League after defeating Inter Milan in the final.

Further success has followed this campaign, with Sevilla again securing a Champions League spot after enjoying a record-breaking season.

Lopetegui guided the team to their highest-ever points tally in the Spanish top flight (77) as well as setting a new record for wins in a single La Liga season (24).