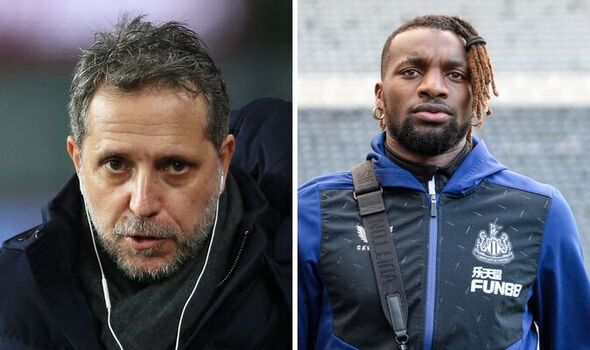 Tottenham chief Fabio Paratici is reportedly considering a bid for Newcastle sensation Allan Saint-Maximin this summer. Spurs have already been active ahead of the window opening with Ivan Perisic arriving on a free.

Fraser Forster is also expected to join as the club’s second-choice goalkeeper behind Hugo Lloris. But more signings are expected as Antonio Conte looks to build a squad capable of challenging further up the table next season.

Spurs will also return to the Champions League with Conte hoping to challenge in Europe. More signings will be needed and bolstering his options in attack appear to be a priority.

The trio of Harry Kane, Son Heung-min and Dejan Kulusevski terrorised defences in the second half of last season. But the likes of Steven Bergwijn and Lucas Moura struggled to make a regular impact when called upon to step into the front three.

Perisic will offer more attacking impetus, but he’s expected to feature as a wing-back. With the addition of Champions League football next season, Conte will need to trust his options in stepping in to deal with the amount of games.

And Football London claim that Saint-Maximin has been earmarked as a top target by Paratici. The report states that Tottenham are ‘weighing up’ a bid for the Frenchman, who has impressed since joining Newcastle.

The 25-year-old played a key role in helping Newcastle avoid relegation last season, scoring five goals and providing five assists. Newcastle’s new owners have big plans for the club and hope to be challenging near the top of the table in the coming years.

But Tottenham are able to offer Saint-Maximin a fast-track to those aims if they come in with a bid. Reports emerged back in April that Newcastle were willing to sell their talisman ahead of the summer transfer window.

It was claimed that Newcastle are hoping to fetch a fee in the region of £50million for the attacker. Tottenham have shown a reluctance to spend big in the past, but Daniel Levy has supposedly handed over the transfer reins to Conte and Paratici this summer.

The two Spanish Bulls ready to light up the A-League