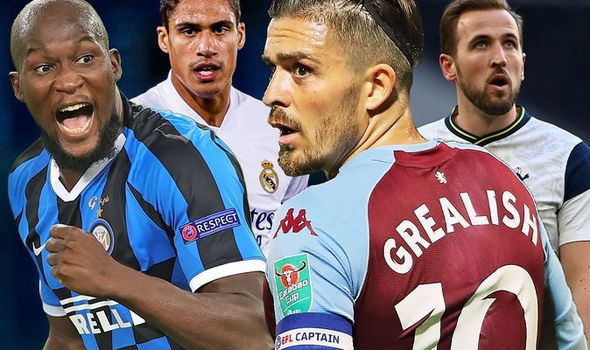 The summer transfer window has moved up a gear as clubs prepare for the 2021-22 Premier League season. Manchester United finally ended their lengthy pursuit of Jadon Sancho on Friday, with the winger completing an initial £73million move from Borussia Dortmund. Manchester City remain keen to sign Harry Kane from Tottenham and Jack Grealish from Aston Villa, but will need to pay huge fees for both players. There might also be an update on Chelsea’s quest to sign a striker, having targeted Erling Haaland and Romelu Lukaku. Arsenal and Liverpool are also exploring deals. Express Sport brings you all the latest transfer news throughout the day.

Do you want an exclusive pre-season preview for YOUR club – both in your inbox and through your letterbox? Head over here to find out more and secure your copy.

8:30am update: Man City remain hopeful of completing transfers for Harry Kane and Jack Grealish this summer and expect to hear news on both players this week.

The pair are set to join the pre-season preparations of Tottenham and Aston Villa, respectively, in the coming weeks after being involved in England’s sensational Euro 2020 campaign.

Pep Guardiola wants a combined £250m deal to be finalised for the pair to boost his plans for the upcoming Premier League season, according to the Sun.

The Spaniard has had a frustrating summer due to so many first-team players still being on holiday.

8:00am update: Not content with signing Sancho for £73m, United boss Ole Gunnar Solskjaer is reportedly moving closer to his dream centre-back signing.

Solskjaer has long wanted a new partner for defender Harry Maguire after having his defensive frailties exposed last term.

Neither Victor Lindelof nor Eric Bailly have sufficiently convinced the Norwegian that they can be trusted to be Maguire’s permanent sidekick and the Old Trafford hierarchy have targeted Real Madrid’s Raphael Varane.

French newspaper Le Parisien has reported that the Red Devils are close to a £39m deal that could even be finalised this week.

7:30am update: Boss Thomas Tuchel’s pursuit of a new Chelsea striker has been frustrating this summer.

The Blues could be priced out of a £150m deal for Dortmund’s Erling Haaland and could instead opt to trigger the £64m release clause that becomes active in the 21-year-old’s contract next summer.

“From our side, we can yes absolutely, Lukaku is not for sale,” Inter CEO Beppe Marotta has said.

“Lukaku is an important piece on the chessboard available to Simone Inzaghi.”

Furthermore, Express Sport has learned that Lukaku is content to remain with the Serie A champions.