Home » Soccer » ‘Trent’s ready’: Buhagiar to get first crack up front at Sydney FC over Bobo

Trent Buhagiar is ready to stamp himself as an A-League force, says Steve Corica. And the Sydney FC coach has promised to give the Olyroos striker the chance to prove it this season – even if the club signs a foreign reinforcement.

The Sky Blues have still not signed a replacement for last season's golden boot Adam Le Fondre, and completed their AFC Champions League commitments with Buhagiar and Kosta Barbarouses combining up front, with mixed results. 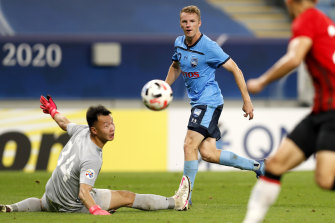 Buhagiar finished the tournament with five goals from five starts, becoming the club's all-time leading goalscorer in Asia in the process – but some of his and Barbarouses' misses and the team's general profligacy in attack underlined a potential problem area for the reigning A-League champions.

Club sources indicate Sydney is closing in on a deal for former favourite Bobo, who topped the A-League's scoring charts in 2017-18 but turns 36 in January and has not recaptured the same form since in stints in Turkey, India and Brazil.

Bobo would be deployed primarily as a bench option, but his signing is largely contingent on his being given permission to enter the country. In a best-case scenario, he wouldn't available until at least a month into the new season.

Corica would not be drawn on links to the Brazilian, describing them as "still just rumours", but said his priority was ensuring Buhagiar, 22, enjoyed as much game time as possible while ensuring the Sky Blues have sufficient attacking depth. 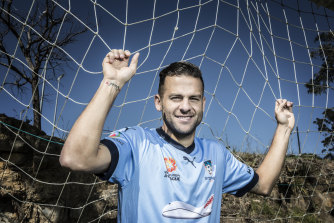 Bobo could be back in Sydney FC colours this season.Credit:Jessica Hromas

That should be music to the ears of Corica's former boss Graham Arnold, the Olyroos coach, who views Buhagiar as a big part of his plans for next year's delayed Tokyo Olympics.

"It's about bringing in the right striker that's going to allow Trent to play a lot," Corica said.

"It doesn't matter who I bring in – if he's doing his job, which he has been doing so far, he will play. Simple as that.

"For me, Trent's ready. I want him to play this year. It's up to him now, because he's had the ACL, he's done very well, and if he does that, he'll play almost every game.

"We have six games in January, so it's a tough period there and we'll need to rotate, but the ball's in his court. I've explained that to him."

Buhagiar has scored only seven goals in the A-League in 70 games for Sydney and the Central Coast Mariners, but his progress was stifled by a long-term knee injury he returned from last year.

Corica said his goalscoring return in Asia was evidence he has developed as a striker beyond just using his lightning speed to get in behind defences.

"If he can do anything like that in the A-League then he's going to bang in the goals," he said.

"Obviously with the ball, the boys know what to look for from him as well now – we want to look for balls in behind for him, because of his pace, but he comes short as well at times and holds the ball up.

"That's something he's added to his game. I'm happy with him at the moment and looking forward to seeing how he goes in the A-League."

England among top seeds for World Cup qualifying; could face Wales and Northern Ireland, Republic of Ireland or Scotland

Arsenal are now back to square one under Mikel Arteta