Atletico Madrid have confirmed that two senior players have tested positive for coronavirus following the most recent round of medical checks.

The Spanish club are set to face RB Leipzig in the Champions League quarter-finals next week, and travel to Portugal for the revised conclusion of European football’s premier competition.

Issuing a statement on Saturday evening, Atletico confirmed two players have contracted the virus and that all necessary health and footballing bodies have been notified as a result. 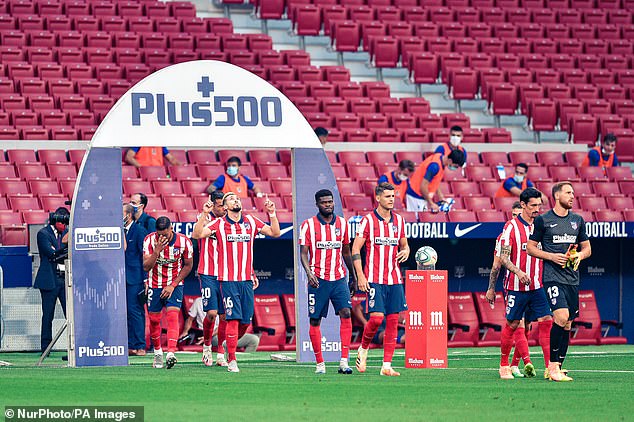 The club wrote: ‘Among the results known today, two positives have appeared, which are isolated in their respective homes, and which were immediately communicated to the Spanish and Portuguese health authorities, UEFA, the Royal Spanish Football Federation, the Portuguese Federation and the Higher Sports Council.’

Atletico have confirmed they will now be following the official guidance issued by UEFA to clubs in the event of positive tests within the playing squad.

The La Liga side also confirmed in the statement that their training regime will be modified as a result. 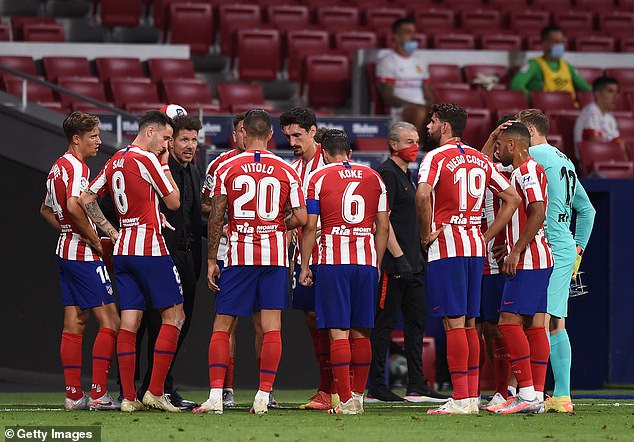 Atletico have not named which two players have tested positive, but have followed protocol

Atletico have not identified which players have tested positive for the virus, though they will now quarantine away from the squad and will not be joining the flight to Lisbon.

Atletico are set to make the trip over to Portugal on Monday, ahead of preparing for their quarter-final clash with Leipzig on Thursday evening.

The club have confirmed that ‘a total of 93 people’ underwent the last lot of virus testing at the training base.