Louis van Gaal may have departed Manchester United over four years ago but the crazy tales of his two seasons at Old Trafford continue to emerge.

The Dutchman has always been known for having a slightly eccentric streak and his assistant at United Ryan Giggs doesn’t contradict the theory.

Speaking on Jamie Carragher’s Greatest Game podcast this week, Giggs recalled how Van Gaal once punched him in the stomach. 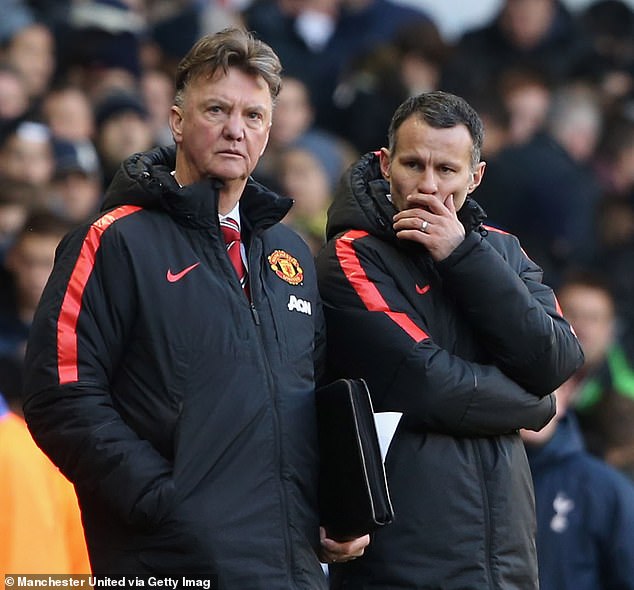 This wasn’t japes between established friends either – it was the very first time they met.

‘He was different. He was very dominating,’ Giggs said. ‘The first time I met him he punched me in the stomach.

‘I’ve gone to meet him, we’ve got a list of the players that I think were good and the ones that were not so good.

‘I’ve gone to meet him at a hotel, he’s opened the door, looked at me up and down and gone “you are in good shape!” Then punched me in the stomach.

‘It was hard as well and I didn’t know what to do. You could have given something back but that’s me out of a job. 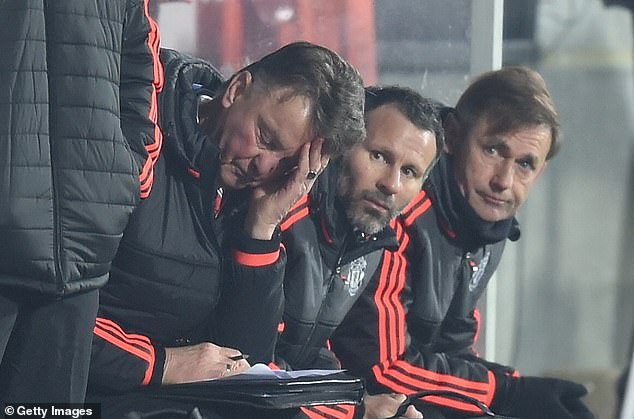 ‘But that’s what he was like. He was very dominating and would be right up in your face.

‘He would be a nightmare now with social distancing. He would be right up in your face, looking down on you and very direct.

‘He looked after his staff and his players and he was a really good person but just very quirky.’

In light of Giggs’s insight into the eccentric world of Van Gaal, we take a look at some of the Dutch manager’s other bizarre moments. 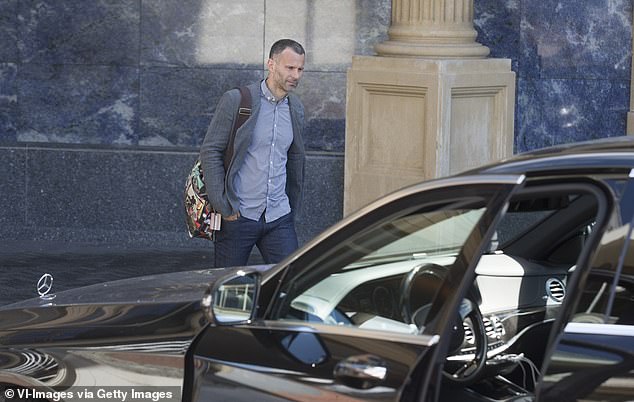 It’s not the only time Van Gaal inflicted physical pain on Giggs during their time working together.

At the club’s end of season awards dinner in 2015, Giggs had the audacity to outbid his boss in an auction for a round of golf with Dwight Yorke at a charity event.

Van Gaal responded by giving him a slap on the back of the head which may have been jovial but also may not have been.

NEVER SATISFIED… EVEN AT 3-0 UP

Argentine defender Martin Demichelis spent just one season under Van Gaal when at Bayern Munich – but the coach left a lasting impression.

‘If I tell you about a great manager, but one who is completely crazy,’ Demichelis told La Nacion a couple of years ago.

‘In one game we were winning 3-0 at half-time and he came into the dressing room kicking the door, the kitbags and shouting that everything had been a disaster. 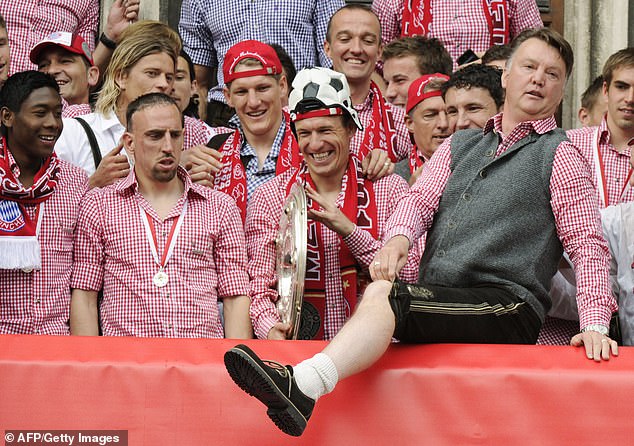 ‘As captain, I had to calm him down: “Stop insulting us, have some respect”.

‘I played badly in the second half and the following day he told me that I had performed badly because I had emotionally unbalanced myself.’

Demichelis, who later played for Manchester City, also spoke about an occasion when he was returning from injury.

‘If you were out for three weeks with a strain, you needed another three weeks of training to be able to play again. That’s what he thought,’ he said.

‘I had an ankle operation, I made my comeback for Argentina but Van Gaal wouldn’t play me. 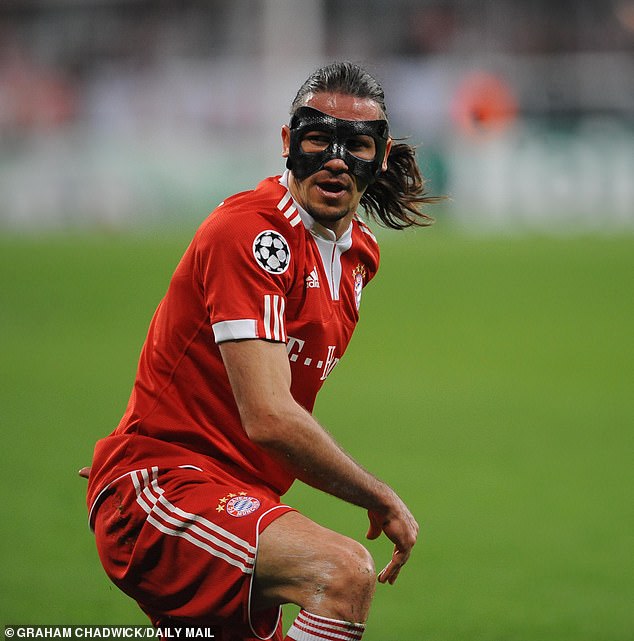 ‘One day, in a game for the starters against the substitutes, with him as referee, the goalkeeper gave me the ball and I smashed the ball in his direction, aiming at his face. It missed him by inches.

‘There was a deafening silence and he said: ‘I ask you all that no one else gives the ball to Demichelis.’

‘We later ended up arguing in the dressing room.’

The man known as the ‘Iron Tulip’ has never been shy in talking up his credentials upon arrival at a new club.

When appointed manager of Ajax in 1991, he grabbed the hand of a club director and said: ‘Congratulations on signing the best coach in the world!’

That was despite not actually having any trophies on his CV at that stage. 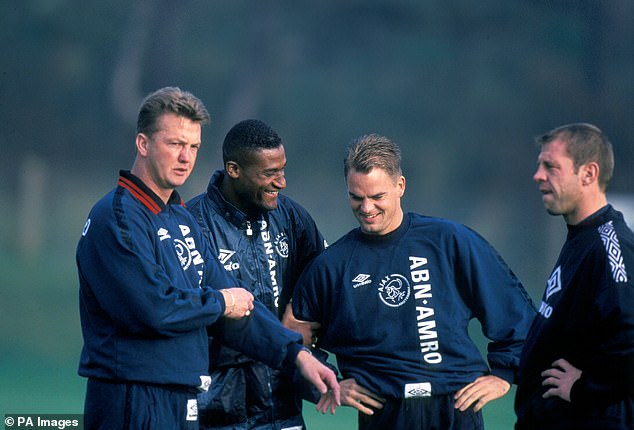 During his first press conference when appointed manager of Barcelona in 1997, Van Gaal bent the truth somewhat by saying: ‘I have achieved more with Ajax in six years than Barcelona has in 100 years.’

And when handed the Holland job in 2000, he declared: ‘I’ve signed a contract with the Dutch national team until 2006, so I can win the World Cup not once but twice.’

Unfortunately, Van Gaal’s Holland failed to qualify for the 2002 tournament…

Ahead of the 2015-16 season, Van Gaal had decided that Wayne Rooney would remain as United’s captain with Michael Carrick as vice-captain.

The man chosen as ‘third captain’ was sat in the press conference alongside him as Van Gaal confirmed his choices. 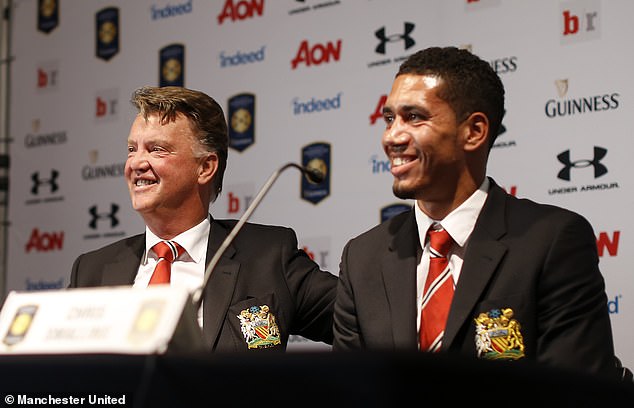 The camera then panned round to the mortified defender Chris Smalling, whose real name appeared to be irrelevant.

To make matters worse, later that season Van Gaal referred to him as Michael Smalling once again.

With English Van Gaal’s second or even third language, there were some excellent choices of vocabulary as he explained his views.

Speaking ahead of the second leg of UEFA Europa League tie with Midtjylland in 2016, with United trailing 2-1 in the tie following a humiliating result in Denmark, Van Gaal demanded more desire from his team.

Van Gaal’s horniness clearly had the desired effect as United won the game 5-1 to make the next round. 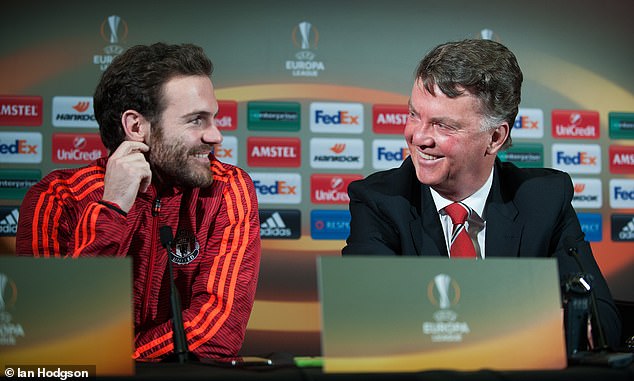 There was also the time he referenced ‘sex masochism’ after Leicester defender Robert Huth pulled the hair of United midfielder Marouane Fellaini.

‘When you see what Huth is doing to Fellaini, that’s a penalty,’ Van Gaal told reporters. ‘Shall I grab you by the hair? What is your reaction when I grab your hair?

‘Your hair is shorter than Fellaini but, when I do that, what are you doing then? It’s a reaction.

‘Every human being who is grabbed by the hair, only with sex masochism, then it is allowed but not in other situations.’ 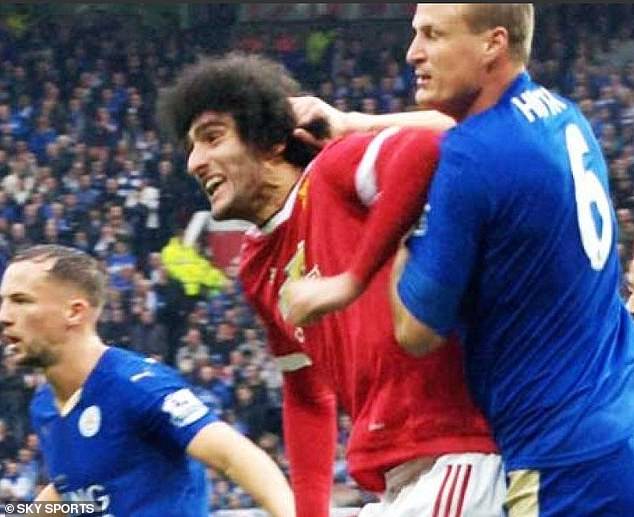 PROVING HE HAS THE BALLS

Van Gaal has never appeared to be a manager afraid of making tough team selection decisions but he took things to an extreme to prove this point when Bayern manager.

‘The coach wanted to make clear to us that he can drop any player, it was all the same to him because, as he said, he had the balls,’ said Toni.

‘He demonstrated this literally by dropping his trousers. I have never experienced anything like it, it was totally crazy.

‘Luckily I didn’t see a lot, because I wasn’t in the front row.’ 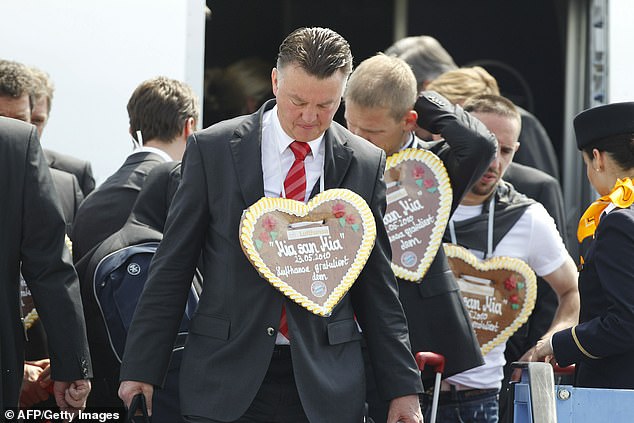 Van Gaal receives a gingerbread heart after Bayern returned from the 2010 Champions League final, which they lost 2-0 to Inter Milan

DIVING TO PROVE A POINT

Van Gaal was responsible for one of the most extraordinary Old Trafford touchline moments during a game with Arsenal in February 2016.

Angered at an apparent dive by Arsenal’s Alexis Sanchez that had escaped the attention of referee Craig Pawson, Van Gaal decided to demonstrate what had happened to fourth official Mike Dean.

Van Gaal, then 64, threw himself to the floor in front of Dean to illustrate the dive to cheers from United’s fans and the bemusement of the watching Arsene Wenger. 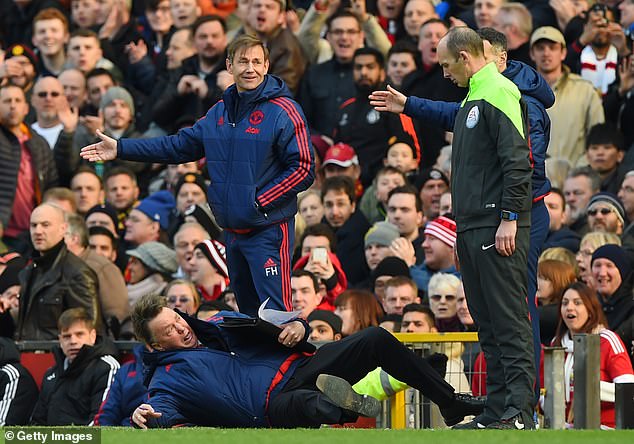 ‘MY FRIENDS IN THE PRESS’

Van Gaal won two LaLiga titles at Barcelona but had a turbulent relationship with some of his star players, notably Rivaldo, the fans and especially the press.

When he left the Nou Camp in the summer of 2000, his famous parting shot was ‘friends of the press, I am leaving. Congratulations.’

From withering stares at journalists who dared to question his authority to calling out ‘stupid questions’ and branding one Manchester journalist ‘fat man’, Van Gaal has never had too much patience for the press.

There was one memorable exchange during his time in charge at Barcelona with a Dutch journalist who insinuated Van Gaal had broken a dressing room agreement by dropping Rivaldo.

Taking the tone of a lecturing teacher, Van Gaal ranted: ‘You’re very bad! Saying I broke my pact with Rivaldo? I never broke my pact.

A classic Van Gaal press conference moment came in February 2015 in response to a jibe from West Ham manager Sam Allardyce that United had become a long-ball side following a 1-1 draw at Upton Park.

Van Gaal had clearly taken offence at Big Sam’s suggestion and, no doubt stewing on it all week, went to great lengths to debunk the theory.

The result was slightly unhinged as Van Gaal produced sheets of A4 paper proving that West Ham were much more of a long ball team than his side.

Waving the pages of stats around, Van Gaal even left copies for the journalists present to take and ‘show them to Big Sam.’ 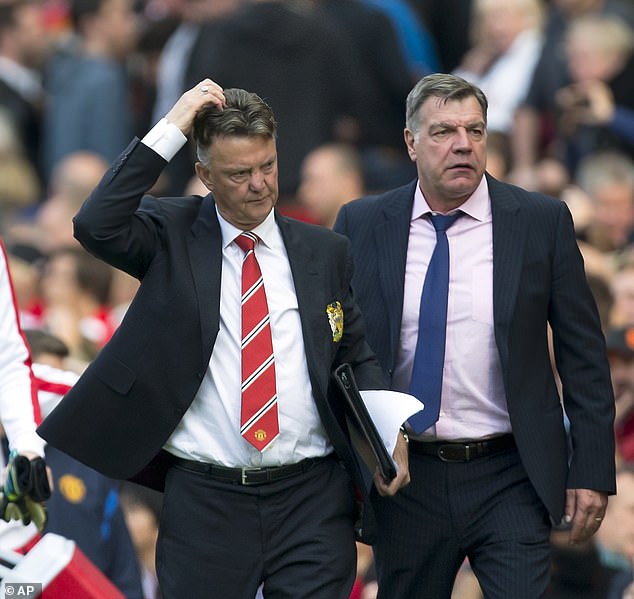 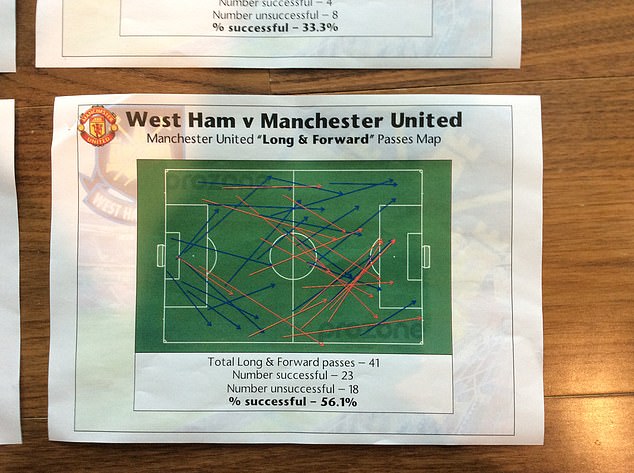 Brazilian defender Rafael da Silva didn’t have the best time under Van Gaal at United and last month described him as ‘one of the worst’ managers he’s played under in an interview.

One of the revelations Rafael made was that Van Gaal had the habit of interrupting every single team meal with a long and rambling speech, often about nothing in particular.

‘Every day, after breakfast, after lunch, or if we had dinner together, he would speak to everyone for 15 minutes about training, about what has happened, about everything, about life,’ he said. 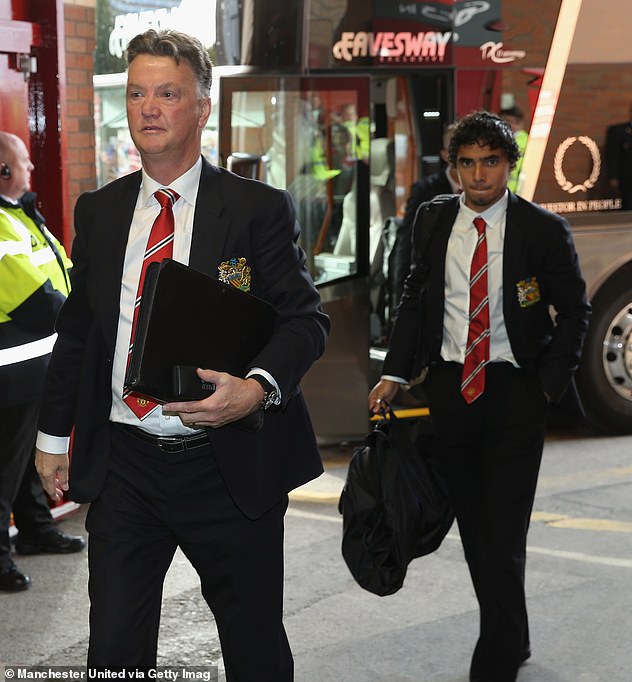 ‘You know when you start to stop listening to what someone is saying, because they speak so much?

‘He wanted to show he could speak. But it was every day! All the time!

‘You need to wait for everybody to finish their food to leave, which is fine, OK. But then we watched him talk, for 15 minutes, with all due respect, about s***. That is the truth man, it was s***.’