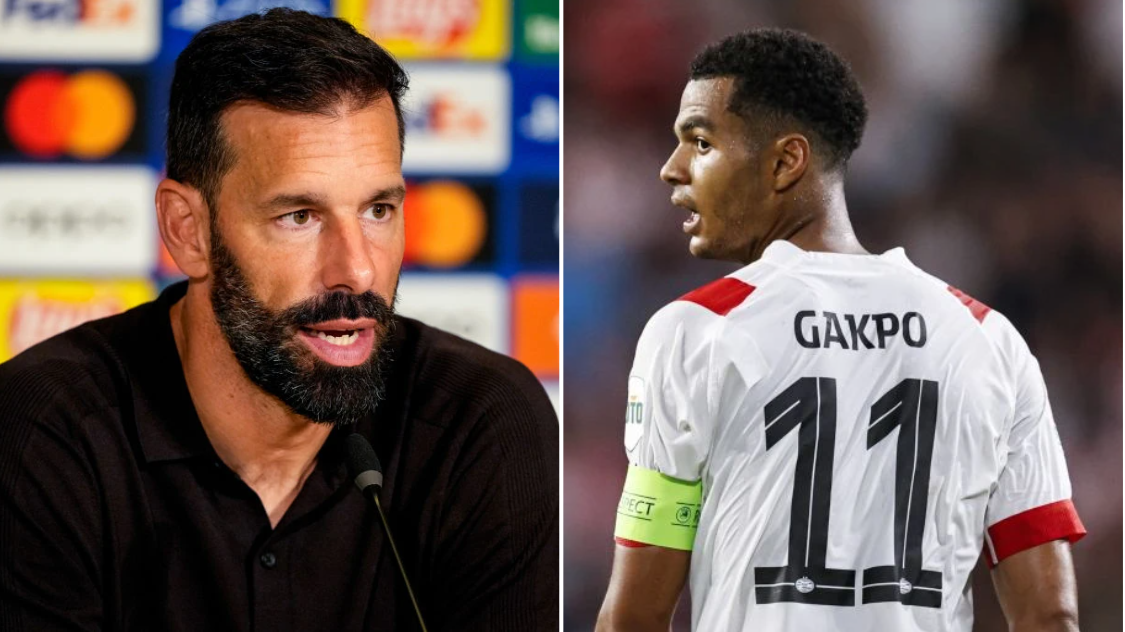 Ruud van Nistelrooy has batted away any suggestions that Cody Gakpo was distracted by rumours linking him with Manchester United after PSV were beaten by Rangers on Wednesday night.

Erik ten Hag is rumoured to be interested in bringing his compatriot to Old Trafford and a deal for the 23-year-old just got a whole lot easier after PSV failed to qualify for the group stages of the Champions League.

The Eredivisie side were beaten 1-0 at home to Rangers – and 3-2 on aggregate – with Gakpo facing a degree of criticism for his lacklustre and ultimately ineffective showing.

He arguably had PSV’s two best chances of the match, making a darting run in behind the defence on the stroke of half-time only to blaze over the bar.

Later, after Antonio Colak had put the visitors ahead, Gakpo was also presented with a great opportunity to level the scores after being slipped in by Xavi Simons, but he fired his effort straight at the goalkeeper from close range.

Going into the match, Gakpo’s future had been one of the big topics of discussion but his manager felt he dealt with the distractions well and gave everything on the pitch for PSV despite his struggles in front of goal.

Asked for his thoughts on Gakpo’s performance given the noise that has surrounded him, Van Nistelrooy responded: ‘I think he fought and he did everything he could.

‘He was a threat. He had some good opportunities in the first half and also one in the second half, but unfortunately he couldn’t score one of those chances.

‘But he was definitely there and did everything he could for the team and the club.’

Speaking prior to the defeat to Rangers, Van Nistelrooy had also been effusive in his praise of Gakpo and the manner in which the young attacker has dealt with the speculation surrounding his future.

‘I think I am very relaxed about the situation,’ he said on Tuesday. ‘There have been rumours about him since the beginning of the season almost eight weeks ago. And we have not seen Cody changing his behaviour up to now.

‘There were rumours over the whole period, and I admire that a lot in him. He is working on his development on a daily basis, playing in games and reaching his level.

‘He is not distracted, he is focused on the games he has to play and focused on tomorrow’s game with his team-mates. For a young guy like him it is special to see that attitude.’

The PSV boss added: ‘It’s obvious [we want him to stay]. As long as he’s a PSV player he’s here. That’s what I’ll focus on and him as well. There’s no if or what ifs. He’s a PSV player until further notice.’

Dortmund ask over £100m for Jude Bellingham as Liverpool, City and more circle