West Bromwich: Jamie Vardy converted two penalties to help Leicester City get off to a winning start in the Premier League season with a 3-0 victory at promoted West Bromwich Albion on Sunday. Everton, meanwhile, ended a miserable run of form against Tottenham Hotspur, winning 1-0 away.

Vardy, the league's top scorer last season, and Dennis Praet both had drilled efforts well saved by West Brom goalkeeper Sam Johnstone in bright sunshine at the Hawthorns, with the hosts offering little in attack in the first half. 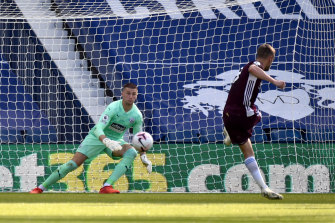 Jamie Vardy scores from the spot for Leicester City against West Bromwich Albion at the Hawthorns on Sunday.Credit:Getty Image

The visitors continued to dominate after the break and took the lead in the 56th minute through debutant Timothy Castagne – a summer signing from Italian side Atalanta – when the fullback headed home a Praet cross.

Vardy was fouled by Kyle Bartley in the penalty area 17 minutes from time, and the striker stroked home the spot-kick to score for the fifth successive trip to West Brom as a Leicester player.

Leicester were able to give substitute James Maddison his first minutes since March after undergoing hip surgery, before Vardy made the win more comprehensive six minutes from time with another penalty.

The visitors, looking to forget their poor end to last season that cost them a place in the Champions League, were much too sharp for West Brom on their Premier League return.

Carlo Ancelotti gave debuts to three new signings including Colombian James Rodriguez but it was Sheffield-born Calvert-Lewin who gave Everton a dream start to the season as he headed powerfully home in the 55th minute.

Tottenham also gave debuts to right back Matt Doherty and midfielder Pierre-Emile Hojbjerg but were disappointing as they suffered a first defeat by Everton since 2012.

Their best chances came before the break as Everton goalkeeper Jordan Pickford denied both Dele Alli and Doherty.

Tottenham lacked imagination after Everton went ahead and the visitors held out with relative ease.

"Against good teams like Everton if you let them play from the back they are comfortable with very good technical players. If you don't press them you give them ammunition," manager Jose Mourinho said.