The forward’s hat-trick against rivals Tottenham just before the international break took her to 52 goals in England’s top division – at a rate of more than a goal a game – going ahead of Nikita Parris’ record in just 50 matches.

Miedema told Sky Sports News: “To get the 50th goal out of the way is nice and I appreciate everything said.

“I’m in form and I’ve shown it over the last three seasons. I also know that I can be better than I am now and I want to look back in five or six years’ time and think ‘yeah, that was an amazing time at Arsenal’.”

The WSL season was curtailed in February when the coronavirus pandemic struck, meaning players went months without the regular football activities. 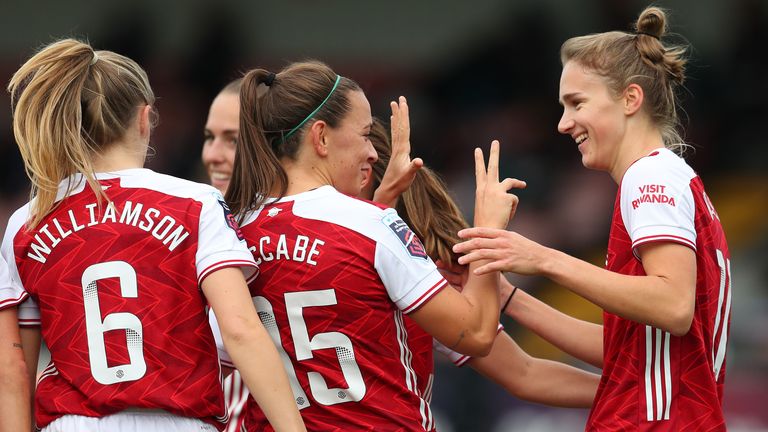 Many professionals, just as millions around the country, struggled without the purpose and routine of regular life but Miedema admits the time away from the pitch has enabled her to refocus on what’s important and was what her game needed.

“It’s been a bit of a rollercoaster for everyone but I really, really enjoyed lockdown. It allowed me to spend time with my family and do different things for once.

“Over the last 10 seasons I haven’t had much time off and after the first three months, I wasn’t really missing it but when we got closer to coming back, I got really excited.

“Me being on the pitch now, I feel like I’m a different person and I feel like I can enjoy it more. It’s allowed me to become a better player now.

“I definitely don’t want to go into a second proper lockdown as an athlete but the time off was nice to reflect on a lot of things and I feel like I’ve benefitted from it.”

Over the last few years, Miedema has become one of the biggest names in the sport by helping the Netherlands win the European Championships in 2017, playing in a World Cup final two years’ later, winning the WSL with Arsenal and being shortlisted for the Ballon d’Or.

But the 24-year old, who is always forthright when it comes to talk of her own fame, manages to crack a smile when Ian Wright is mentioned as one of her biggest supporters.

“I’m not the biggest fan of being in the spotlight but this is the way the women’s game is developing.

“It’s really cool, it’s nice for the old and current professionals to bond over women’s football.

“I’ve met Ian a few times online and he talks a lot but that’s good because he’s funny. It’s really good to have contact with a club legend and for someone like him to support the women’s game.

Miedema will be part of the Netherlands squad to travel to Tokyo for the Olympics next summer, which will be the last tournament Sarina Wiegman leads her country before joining as England’s head coach.

Miedema admits Wiegman’s next job has come up unexpectedly in the Netherlands camp, much to the amusement of the team.

“She’s had a couple of moments in meeting where she’s said ‘England’ instead of ‘Netherlands’ and we’ve been laughing about it but we are just focused on what we want to achieve.

“We are a dark horse. There should be a lot of countries performing better than we are, I won’t say we need to win it but we know where we stand.”

“I love facing good players and it’s amazing for the league with all the big players wanting to play here and it’s only going to get better over the next couple of years. It’s great to play against World Champions and amazing players who have achieved so much in Europe.

“It’s still early doors, we want to build on what we’ve done. We want to be chased by the rest.”

Daniel James names the other fastest players at Manchester United