Jean-Paul de Marigny's reign as Western Sydney Wanderers' coach has come to an abrupt end with the Mauritian leaving the club before beginning his first full season in charge.

The 56-year-old parted ways with the club on Monday, less than three months after being appointed head coach on a permanent basis. The Wanderers are on the eve of beginning their pre-season ahead of the next A-League campaign, which is due to start in late December. 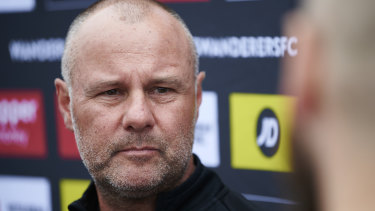 The club made a brief announcement confirming the departure of de Marigny as head coach, suggesting a replacement could be named before the end of the week.

"Western Sydney Wanderers FC have today parted ways with head coach Jean-Paul de Marigny. The club thanks Jean-Paul for his efforts and wishes him success in the future. The club will make an announcement in the coming days on a replacement coach," a club statement read.