Home » Soccer » ‘We deserve to be in a grand final’: Maclaren

Melbourne City's 4-0 shellacking at the hands of Adelaide United in the FFA Cup final was not only a shock but it dealt a blow to the self-esteem and the confidence of the hitherto high-flying squad.

Most pundits expected Erick Mombaerts' side to land the trophy despite the game being played in South Australia. But from disaster can come inspiration – if a team can learn its lessons.

While the disappointment of the defeat was raw – Mombaerts himself had criticised the mentality of his players – the squad itself was gathering together, vowing to use the loss and humiliation as a galvanising force for the rest of the season. 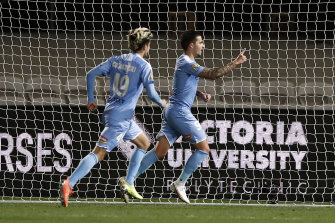 There were a few hiccups along the way, and on the odd occasion City's mental resolve was called into question, especially when they blew a 1-0 lead and lost to grand final opponents Sydney, who played with 10 men for over an hour.

But that game was at the end of December.

In the intervening months, pre and post-pandemic, City's resolve has strengthened, culminating in a gutsy win in the semi-final against a Western United side, which had held sway for long periods before Jamie Maclaren's penalty put City in front with 24 minutes to go.

Maclaren, who won the Golden Boot this season with 22 goals, is the focal point of City's attack and will be the man expected to make the difference in Sunday's grand final.

It's a position he relishes, and he believes that the lessons learned from that nightmare evening at Hindmarsh Stadium, and in the way City disposed of Western in the semi-final, will be invaluable in the high pressure environment of a grand final.

"I think we have grown as a unit since the Adelaide game. At the start of the season we started like a house on fire and we probably took the final for granted. We were a little bit annoyed that Adelaide got to have the final in their backyard," he said.

"We didn't get the result we wanted and that hurt a lot. We made a pact after that game to really kick on this season. Adelaide are not in the top six and we are sitting second, so it did have an affect.

"If someone said to us after that game where would you rather be, I think people would be saying in a grand final and we have got a lot more improving to do. I don't think going into Sunday we couldn't be more prepared."

The team has played some excellent football this season, but Maclaren takes great heart from the way it was able to be out of the contest for long periods against Western in the semi-final on Wednesday night and still come out on top, winning 2-0.

"When it comes to finals, it's the team that makes the least mistakes and the team that capitalises on their opportunities most [that] generally wins the game," he said.

"The other night we probably weren't the best side for 65 minutes, but we are not ashamed about that because when the big moments came we took them.

"We were solid at the back, [goalkeeper] Tommy Glover and our back four were superb and sometimes when you are not on top they are the biggest moments when you have to capitalise.

"We believe going into Sunday there will be patches when Sydney will be the better side, purely because they have got fantastic players, who have been in grand finals before, and we need to weather that storm.

"We are not ashamed to say that we probably weren't the better side in that semi-final but we have been the second best team all year and we deserve to be in a grand final."

If it does come down to a penalty shoot out, Maclaren won't be shy – although he won't take the first one.

"I think that's the easy way out. I believe the fourth and fifth are the most important and I will be putting my hand up for one of those," he said.