Match report and highlights as the on-loan Jesse Lingard nets twice in the first half to help West Ham to victory; Jarrod Bowen adds a third, before Kelechi Iheanacho’s late double for Leicester; the Hammers move back up to fourth, while Leicester stay third

West Ham raced into a two-goal lead as the on-loan Lingard struck twice before half-time with a brilliant cushioned volley (29), followed by a tap-in (44).

And when Jarrod Bowen swept home a third three minutes into the second half, the points appeared in the bag for David Moyes’s side. However, the in-form Kelechi Iheanacho gave Leicester hope of a recovery by smashing home an unstoppable drive with 20 minutes to go, before adding a second in injury time with his ninth goal in his last six matches.

West Ham, though, held on for the win that moved them a point above Chelsea and back into the fourth and final Champions League berth.

Meanwhile, Brendan Rodgers’s team stay third in the table, although they are now just a point above the Hammers after back-to-back league defeats with seven games left this season.

Man of the match: Jarrod Bowen

How the Hammers hung on to go fourth

The Foxes arrived in the capital without James Maddison, Ayoze Perez and Hamza Choudhury after the trio reportedly broke Covid regulations, forcing Rodgers into two changes.

The visitors’ day went from bad to worse as despite making a promising start to the contest at the London Stadium, they went behind just before the half-hour mark to a sublime goal.

Arthur Masuaku was given too much time and space to cross from the left and although his centre evaded everyone in the middle, Vladimir Coufal was there to collect the ball at the far post, before finding Lingard on the right edge of the box. The England international then beat Kasper Schmeichel at his near post with a clever volley. 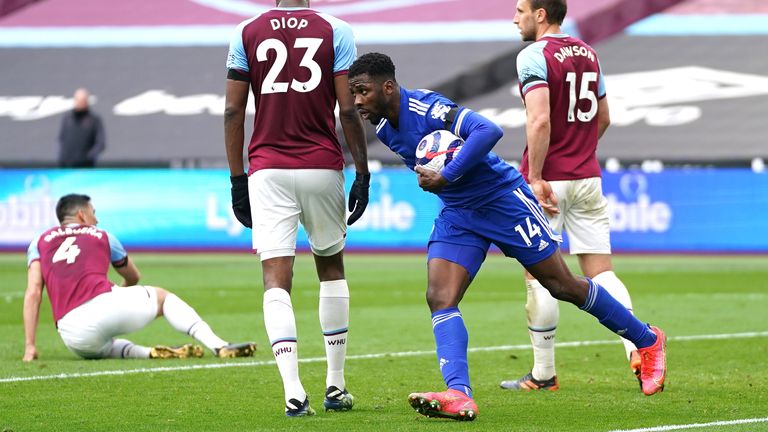 The hosts doubled their lead just before half-time with a simple strike as Issa Diop’s long clearance found Bowen running off Jonny Evans’s shoulder, with forward rolling the ball across for the unmarked Lingard to tap home into an empty net for his seventh goal – confirmed after a VAR check – since joining the club from Man Utd.

If West Ham thought they were in dreamland at the break, then they soon found themselves in total control of proceedings as now Lingard turned provider, with the forward taking advantage of Iheanacho’s misplaced pass to find Tomas Soucek in the box, who in turn set up Bowen to smash home a third.

Jarrod Bowen started in attack for West Ham, coming in for Michail Antonio, who suffered a hamstring injury against Wolves on Monday night.

Meanwhile, Leicester made two changes, with Dennis Praet and Ricardo Pereira both recalled.

Game over? Well, not quite, with the visitors – who almost went 4-0 down, only to survive a close VAR call – throwing everything at their opponents in the final quarter, almost snatching an unlikely point in the process as West Ham sat back looking to protect their lead.

That drew the Foxes on to them, though, with Iheanacho firstly giving his side hope of a comeback with a powerful drive from the edge of the box after Masuaku had lost the ball in a bad area.

And the Nigeria frontman was there again in stoppage time to fire home from an acute angle as Leicester sensed a point was on the cards, only for time to run out on them.

📊 Most @premierleague apps for a single club

He has scored in 4 successive PL apps for the 1st time in his career pic.twitter.com/Ur6idDinYw

West Ham boss David Moyes: “I’m disappointed with the way we finished the game. We’ve got to get out of the habit of going 3-0 up and conceding goals.

“That’s really important and we’ve got to do something about it. But overall I’m thrilled with the results we’re getting.

“If before the game you’d offered me 3-2 against the team third in the league and going for the Champions League I’d have snapped your hand off.

“There’s a real belief that we can go and win games and we’ve got players who can do that.”

Lingard has now scored eight goals in nine appearances since joining on loan from Manchester United, and Moyes added: “He’s has been crucial, he’s helped the team greatly.

“I didn’t expect him to get quite so many goals so long may it continue.”

Leicester boss Brendan Rodgers on leaving out three players: “I can tell you there was a breach.

“My objective when coming to Leicester was to create standards on and off the pitch.

“The standards fell way below what we would expect, especially at this stage of the season when we are challenging and fighting. They fell well below that.

“The guys would have been in the squad but as a consequence they weren’t. It wasn’t ideal but that’s how strongly I felt.

“We were coming into a very important game but some things are more important than football. You have to respect what the nation is going through and what our values are.

“From a personal perspective I was bitterly disappointed. But it’s a mistake that they’ve made and I won’t hold it against them. It’s in the past now.”

Analysis: A nightmare for Rodgers

“This is so important to Leicester now, they don’t want to miss out on the Champions League,” the former Liverpool and Tottenham midfielder told Sky Sports.

“It’s a side story that, as a manager, you just don’t want to be involved in. It’s a nightmare for a manager. You don’t want your players misbehaving at a time like this, we all know the importance of it.”

Scored 8 goals in his last 6 apps in all comps pic.twitter.com/QhGGnZjTsV

Man of the Match – Jarrod Bowen

There were more than a few eyebrows raised when West Ham shelled out an initial £18m to sign Bowen from Hull City in January 2020, but not anymore, with the Englishman having proved a shrewd acquisition.

Bowen may have only managed one goal last season, but he has more than made up for it this time around with an impressive eight goals and four assists in his 31 Premier League outings to date.

And on Sunday afternoon in the east end of London, the 24-year-old produced a man-of-the-match display to help West Ham edge top-four rivals Leicester in a five-goal thriller, scoring his side’s decisive third goal just after half-time, as well as putting a goal on a plate for Lingard.

All of which means Bowen has now scored in three straight top-flight games for the first time to help the Hammers move back up to fourth and now just seven matches away from a place in next season’s Champions League.

West Ham take on struggling Newcastle United at St James’ Park next Saturday, with the game kicking off at 12.30pm on Sky Sports Premier League.

Meanwhile, Leicester face Southampton in the FA Cup semi-finals at Wembley on Sunday, April 18, with the match getting under way at 6.30pm.