West Ham against Crystal Palace might not, in the ordinary course of events, be a match that many looked upon as being reflective of the possibility and the optimism being in the Premier League can generate. The fixture’s status as a 3pm kick-off on Saturday largely reflects that: two established sides, but not – in the course of recent top-flight history, let’s say – exciting, silverware-challenging, likely-to-upset-the-status-quo clubs, playing each other without a ‘big six’ outfit in sight.

Except, this year, both these clubs bear watching more than most. Both these clubs serve as blueprints for others, at different ends of a strategic spectrum and with different possibilities for each.

West Ham, of course, might not be considered among the ‘big six’, but can rightfully point to themselves being in the top six; a tremendous 2020/21 campaign brought them European football and plenty of plaudits, and their start to the new season has been just as positive.

A thumping of Leicester on Monday night leaves them top of the fledgeling table and with the fans dreaming of what might lie ahead this term. After several years of meandering around the lower reaches of the table with vague and unrecognised ambitions of becoming a competitive outfit again, West Ham have found a formula that works for them: an established manager, some terrific recruitment work and the odd homegrown star to round out the side.

Longevity is the big question the Hammers now face, both in the longer-term aspect of how to replace the likes of Declan Rice and Jarrod Bowen if they depart, but also in the shorter term, looking at coping with Europa League football, travel and ever-more international call-ups.

It has been a year and a bit of undeniable progress, exciting for supporters (especially now they get to witness it first hand) and full of speculative potential for just how far this team could go.

Sometimes, for no single specific reason other than solid coaching and a dressing room which clicks, everything falls into place. That, more than a long-term foundation of stylistic fundamentals and club-wide strategy, appears to be where West Ham’s on-pitch upward curve has stemmed from, having re-appointed the manager they let depart 19 months previously.

Crystal Palace are rather different. They faced a real summer of change and opportunity, as uncertain and risk-filled a moment as the Selhurst Park side has come up against since their promotion back into the top flight in 2013, and they have met it head-on with a plan which looks very much long-term, sustainable and, again, exciting for the fans – if it goes right on the pitch.

Younger players being recruited to replace those out of contract, a clear pathway for the Championship’s best players to get regular Premier League action and a bold appointment as head coach – Palace are making a niche for themselves in the transfer market as part of a wider approach to improve.

Consider: the early 20-somethings in the Championship, the very best ones, watching the likes of Marc Guehi and Michael Olise, plus Ebe Eze once back from injury, starting to star in the league they’re all trying to reach. Eventually, if one or two of them move on – profits for Palace, reinvested, the process continuing – the pathway is even more apparent and even more enticing. Join Crystal Palace, the recruitment spiel can include. Top-flight exposure, forward-thinking coaching, the possibility to step up to a bigger side when you’re ready.

It’s an obvious draw for those looking to progress their careers further, and exciting each time it happens for Palace fans to feel their own team can keep improving. 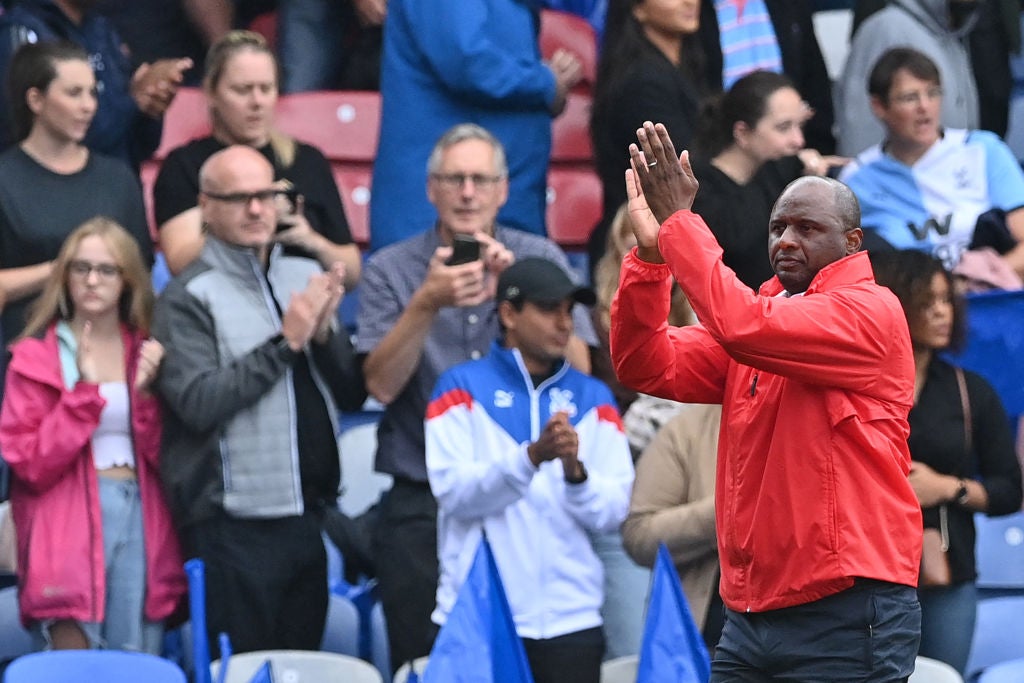 But it has to happen the first time, of course, for the rest to follow.

Patrick Vieira’s start to life at Selhurst Park has not been smooth or easy, but neither is there the feeling of an inevitable rush to fix over-ambitious mistakes made, akin to when Frank de Boer was appointed and quickly dismissed.

A clash this weekend then, of styles and strategies – but a mesh of ideals with the same ultimate ambition in mind, to climb the Premier League table and not just secure a long-term place among 20, but be capable of offering hope that more can follow than merely making up the numbers.

West Ham, with European football, can argue they have achieved that in the first instance, and this season’s rewards are another version of the same. Palace have designed a very different route to their own future, and will hope for the first positive steps down that journey at the London Stadium.