West Ham made light of not having a recognised striker as they swatted aside Sheffield United at the London Stadium.

David Moyes’ decision not to bring in a forward on deadline day looked set to come back to haunt him with Michail Antonio, his only senior frontman, ruled out injured.

But with Jesse Lingard providing the attacking menace, goals from Declan Rice, Issa Diop and Ryan Fredericks secured a 3-0 win and kept West Ham in the hunt for an unlikely Champions League place.

Hammers boss Moyes had last week bemoaned the fact his side were the only team in the Premier League to have not been awarded a penalty this season.

His prayers were almost answered after only five minutes when Craig Dawson, following up Rice’s free-kick, was pushed over in the area by Enda Stephens. 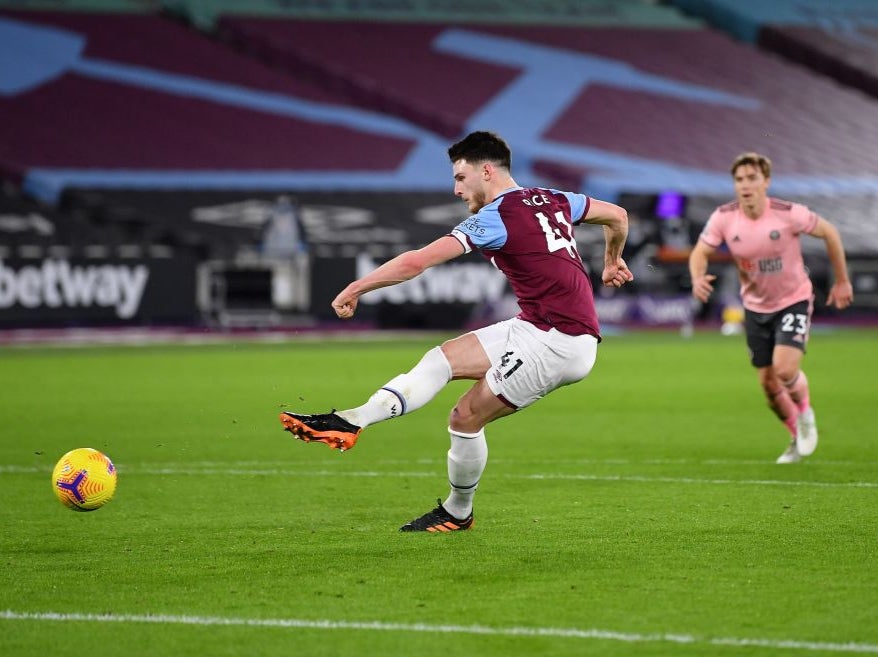 Referee Simon Hooper awarded the spot-kick but VAR ruled that Dawson was offside when Rice struck his initial shot.

Moyes would not have to wait long for his penalty hoodoo to come to an end, however.

Lingard, back in the team after sitting out at Manchester United in the FA Cup under the terms of his loan deal, was getting a lot of joy in the inside-left position and twice forced good saves from Aaron Ramsdale.

And five minutes before half-time the former England winger dispossessed Oliver Norwood, raced upfield and exchanged passes with Jarrod Bowen before he was wiped out in the area by an ungainly challenge from Chris Basham.

Lingard wanted to take the penalty but captain Rice pulled rank before tucking away his first goal of the season, and the first spot-kick of his career.

The Blades arrived in London knowing a win would lift them off the foot of the table for the first time since 7 November.

David McGoldrick should have hauled them level with a close-range header, but his weak effort was kept out by a combination of Ben Johnson’s back and Lukasz Fabianski’s hand.

It was also the 39th goal Chris Wilder’s side had leaked this season, which was as many as they conceded during the whole of their impressive maiden campaign in the top flight.

To make matters worse defender John Egan left the field on a stretcher before Hammers substitute Fredericks drilled home in stoppage time to cap another tough night for the embattled Blades.