A stray cat crashed Socceroos training in Kuwait earlier this year. When they lobbed in Vietnam three months later, they were confronted by a frog-infested pitch. Now they’re in the UAE, and as if on cue, another unlikely four-legged visitor emerged out of nowhere: a llama.

It could have been an alpaca. Nobody’s really sure, and fortunately the staff at the venue in Sharjah – where the Australian team is preparing for Wednesday morning’s World Cup qualifier against China – were able to chase it away before Graham Arnold and his players turned up and it became a nuisance.

According to various websites which seem to exist solely for this purpose, the llama is apparently an omen. “Only through hard work and perseverance will your dreams be realised,” says one such page explaining the symbolism behind it. “Also, you can adapt to any situation in which you find yourself.”

The llama, as it turns out, might be Arnold’s spirit animal. The Socceroos have taken just one point from their last two games, against the two teams – Japan and Saudi Arabia – who always loomed as their biggest obstacles on the road to Qatar 2022. But as far as he’s concerned, everything is peachy, and there is no need for any deviation from their tactical plans, so long as his players keep working hard and persevere.

“We’ve been playing great. All the statistics show that,” Arnold said.

“Our performance in Japan was probably the best Socceroo performance ever in Japan, and we scored against Japan in Japan – only the second goal ever that’s been scored. Against Saudi, all the statistics show how dominant we were … we did everything but win the game. 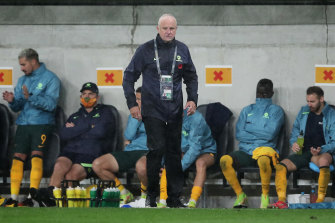 Graham Arnold says there is no cause for concern over the Socceroos’ recent form.Credit:Getty

“It’s just a matter of the individual putting the ball in the back of the net. Overall, I couldn’t be happier with the boys and their efforts. Everything we’re doing has been fantastic in a very trying year.”

When it comes to the matter of adaptation, though, the loss of Harry Souttar presents a challenging scenario both in the short and medium-term. It was confirmed on Monday morning that the injury Souttar suffered in Thursday’s scoreless draw with the Saudis was indeed a dreaded ACL rupture, as first suspected.

It will put him out of action for between nine and 12 months and will almost certainly kill off what felt like an inevitable move to the Premier League – either with his promotion-hunting club, Stoke City, or one of the many others who were tracking his rapid development.

“Obviously it’s a loss, losing Harry, but what can you do? You’ve just got to get on with it and be positive with the players that we’ve got and move forward,” Arnold said.

“I think it is, definitely, nine to 12 [months out]. But Harry, with the character and mentality that kid’s got … he was more upbeat than nearly anyone else in the whole dressing room after the game. And that’s the type of character and kid he is. It’s a setback, he understands that, but he knows that it’s going to make him stronger in the long-run and make him mentally tougher.

Arnold may be forced to change both of his centre-backs for this fixture. Souttar’s defensive partner Trent Sainsbury is carrying a hamstring injury, and while Arnold said he expects him to be fit to face China, he has brought in two defenders – Ryan McGowan and Bailey Wright – as cover for Souttar, which suggests there is a decent chance he too could miss out.

In any case, the Socceroos should comfortably account for China, who they beat 3-0 earlier this year and are all but out of the reckoning to qualify for the World Cup. Much like the Socceroos, they have been forced to take their home matches to a neutral country due to border restrictions.

“There’s a lot of problems at the moment in Chinese football,” Arnold said. “They’re having to play all their games away from home, which is pretty much not far off what’s happened to us. If anything, a lot of times, that can build camaraderie. We’ve just got to make sure we get our performance right.”