Former Liverpool midfielder Emre Can appears to still be in admiration for James Milner’s fitness levels.

Can, 26, played alongside Milner for three seasons before quitting Anfield for Juventus on a free transfer in the summer of 2018.

While the two regularly competed for a place in Jurgen Klopp’s midfield, Milner’s versatility ensured he was a regular fixture in the team in a number of positions. The 34-year-old is most comfortable in central midfield but has filed in at full-back during his spell at Anfield.

One of the most outstanding features of Milner’s game is his engine – and he proved his super-human fitness levels by winning Liverpool’s pre-season fitness tests last summer.

Christian Falk, the head of football for Germany publication BILD, was recently chatting with Can, who now plays for Borussia Dortmund, about Milner. 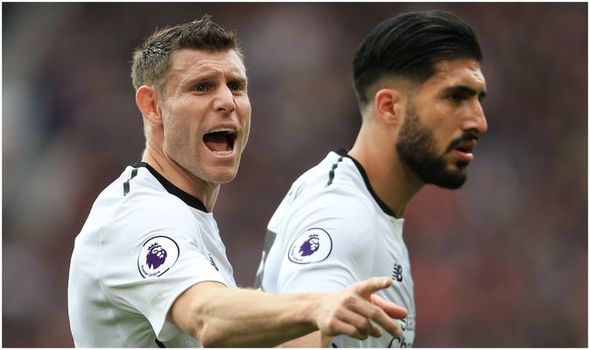 The journalist revealed the former Manchester City and Aston Villa star is his “favourite Liverpool player” because “he is purely about football”.

And Falk revealed to LFC Transfer Room: “Emre said to me that he thinks that Milner is still the fittest player in Liverpool.”

Milner has remained the top of the game in England for a number of years since breaking into the Leeds team at the age of 16. He is renowned for putting in the hard yards and recently offered a fascinating insight into his longevity.

“Fortune is one [thing], I think you need that luck with injuries and things like that,” Milner told BBC Radio 5 Live. “But I’ve always tried to do whatever I can to give myself the best opportunities, whether that’s looking at diet and gym work; I did that as early as Leeds and Newcastle, the gym stuff, and that’s developed as well. I just try to push myself.

“Earlier in my career, maybe five or six years ago, people were saying ‘You’re going to have to start toning down your work in training and reducing your numbers and output in training to keep that longevity’ and I didn’t really agree with that.

“I thought, obviously I’m going to drop off at some point in terms of physical output and things like that, but surely if I push myself more, the further distance I’ve got to fall. If I do drop off then I’ll be in amongst the pack as opposed to dropping from the middle pack downwards. That’s what I’ve always tried to do.

“I’ve always tried to push myself, always tried to keep the young lads in place in terms of running and stuff like that. I’m sure I’ll get reeled in at some point but I’m hoping that’s not for a few years yet.”

Everton vs Tottenham prediction: How will Premier League fixture play out tonight?