Home » Soccer » Why is it all going wrong for Marcus Rashford at Man United?

Football fans will forgive their team’s players most sins but never a perceived lack of effort or commitment to the cause.

It’s why Marcus Rashford felt the wrath of the Old Trafford crowd when he didn’t attempt the five-yard burst to try and make a spilled ball by Aston Villa goalkeeper Emiliano Martinez on Monday night.

The fact Rashford had just sprinted from the halfway line to ensure he was even in the vicinity of any rebound to Mason Greenwood’s initial effort appeared to count for little. 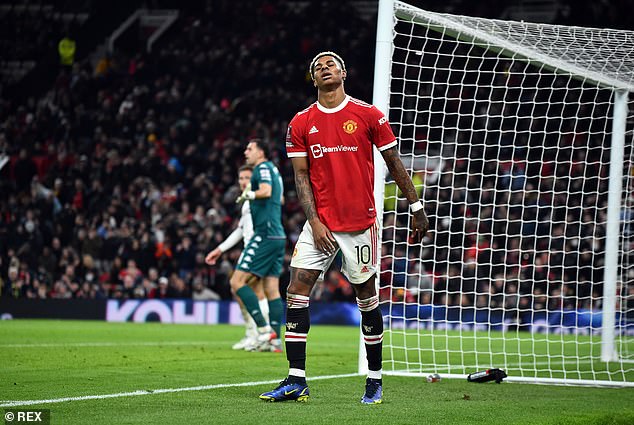 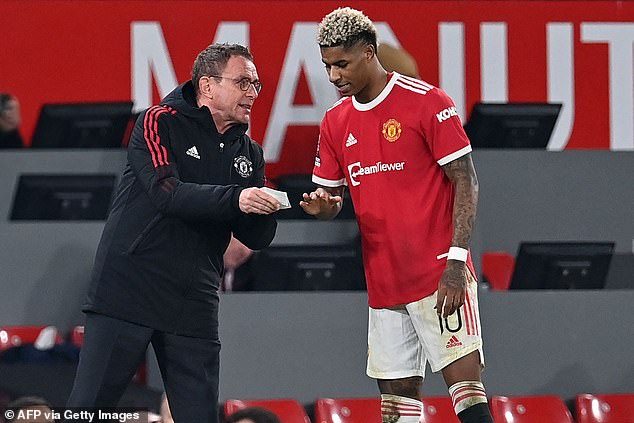 It was also missed by the furious United fans on social media who vented that Rashford was ‘f**king them off’ and claiming ‘his attitude stinks’.

Pundits weighed in as well, with Alan Shearer saying Rashford was making football look like a ‘chore’ this season and Dion Dublin describing the England forward as ‘disheartened.’

But in the wider context of another sub-standard performance in the FA Cup third round tie, it is hard to disagree with that assessment.

Rashford is playing well beneath his best and has been doing for some time now. He hasn’t scored since the end of October but it goes beyond a mere goal drought, which can afflict any striker.

His shoulders are slumped and his face often looks downcast when he pulls on the red jersey that means so much to him. Rashford doesn’t seem to be in the right places to get chances and has been snatching at those that do come his way. 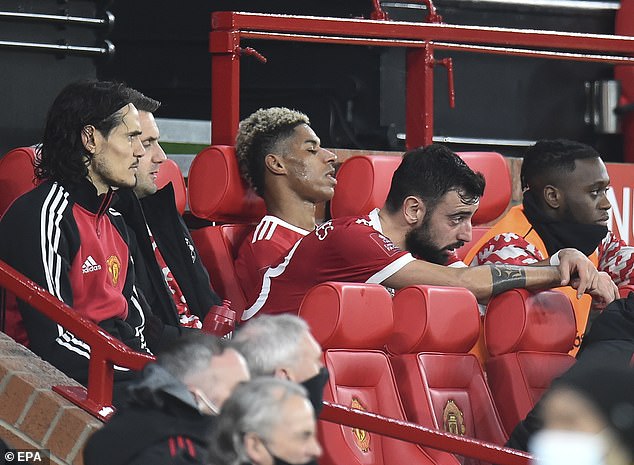 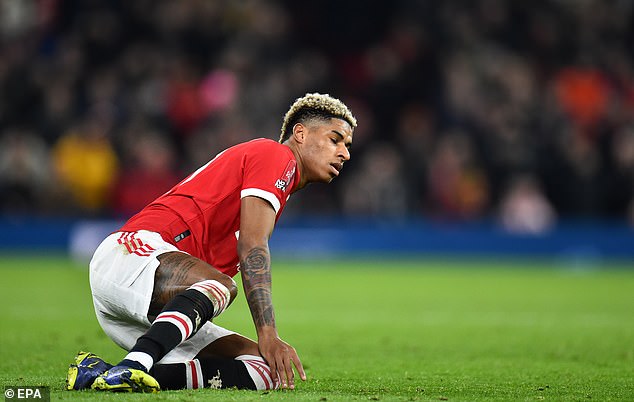 Having returned from his shoulder injury with three goals in four games, Rashford has since struggled with no goals in 11 matches

There is certainly a drop off in some of his stats this season, since he returned from his shoulder surgery, compared to last season when Rashford registered an impressive 21 goals and 15 assists in all competitions.

In Premier League appearances, Rashford’s average number of shots per game has dropped from 2.43 to 1.8, while his chances created average has gone down from 1.32 per game to 0.9.

His passing accuracy has dipped slightly and there has been a big drop-off in successful crosses, explained in part by the narrowness of Ralf Rangnick’s now ditched 4-2-2-2 formation.

All of this suggests both that Rashford isn’t getting the service he requires as much as he was and also that he is less effective in taking the opportunities that do come and creating them for team-mates. 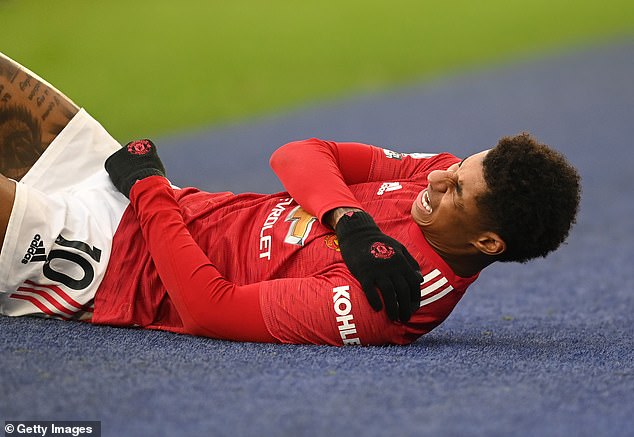 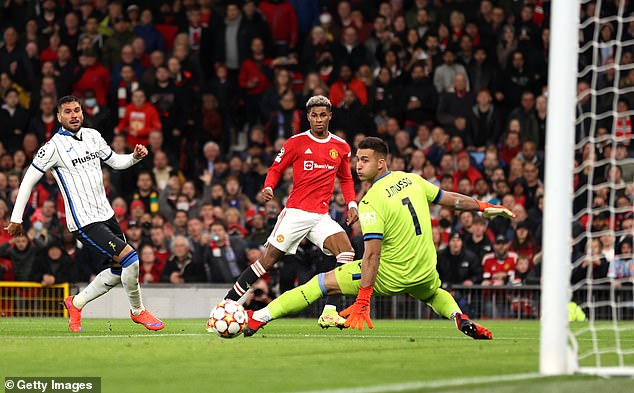 He returned from his lay-off with a flurry of goals, including this one against Atalanta 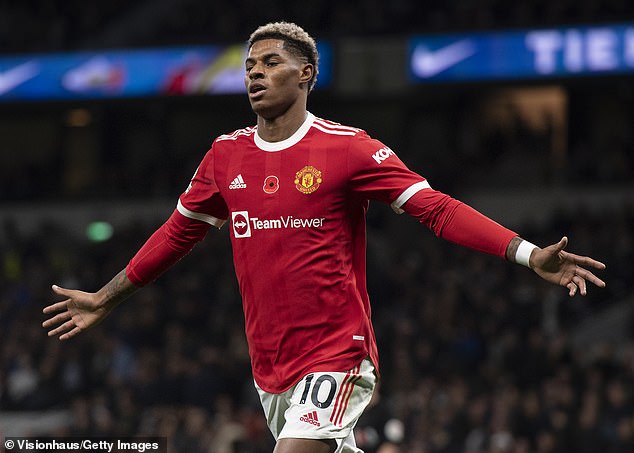 And when a striker’s main currency is goals, it will concern both Rashford and United that his Premier League average is currently a goal every 300 minutes or once every three-and-a-bit games.

Rashford showed a great deal of self-sacrifice for the United and England causes to play on through last season and the European Championship with a shoulder issue so serious it required an operation in August.

After United lost on penalties to Villarreal in the UEFA Europa League final, Rashford spoke openly about the sacrifice of playing through the pain barrier by himself and others like Harry Maguire.

‘I could walk you into the dressing room and show you five, six, seven players – and me – who have had injuries from the start of the season. We all stayed and fought to be successful for the club,’ he said.

That injury issue solved, Rashford returned by scoring three times in four matches against Leicester, Atalanta and Tottenham. It was an explosive return and boded well. But since then, goals have proved elusive. 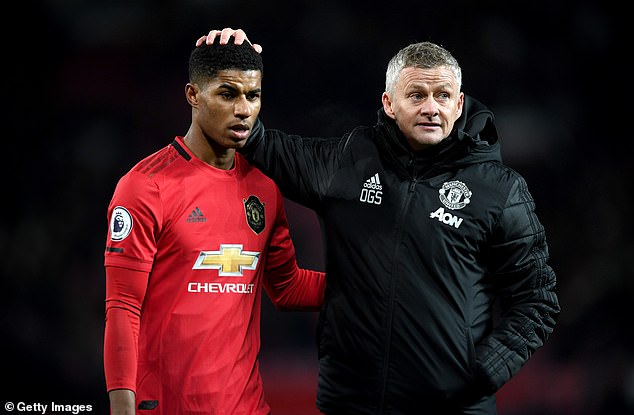 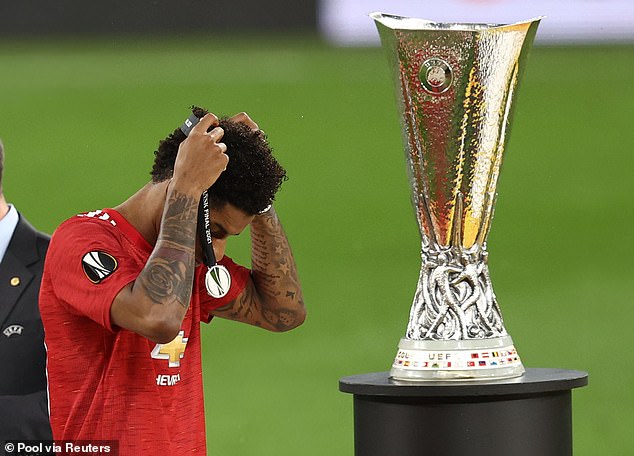 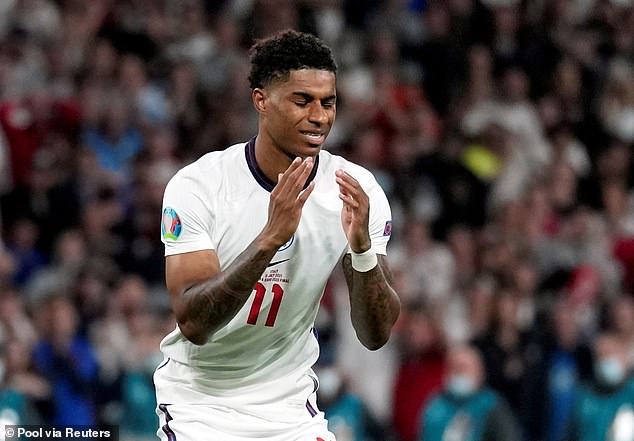 After that, Rashford was one of the England players who missed a penalty in the Euro final

Last season, Rashford’s goals for United came in a pretty even spread throughout, meaning this 11-game drought is uncharacteristic and worrying, especially now he’s fully fit.

But in his defence, he’s far from the only player at Old Trafford struggling for form amid a turbulent season of managerial upheaval and general strife.

The low morale within the United dressing room is well-documented. This isn’t how anyone predicted their season would turn out when Cristiano Ronaldo, Raphael Varane and Jadon Sancho were signed to mount a title challenge in the summer.

Ole Gunnar Solskjaer paid the price for some dreadful performances against not only supposed title rivals but lesser lights as well, while Rangnick already seems to have concluded there is simply insufficient time in his temporary stint to solve all of United’s problems.

Rashford is looking out of sorts but then so is Sancho, Greenwood, Fernandes and half-a-dozen others. The United side has been drenched in mediocrity for most of the season.

Only goalkeeper David de Gea could be said to be consistently playing well and that really isn’t the sign of a harmonious team.

Rangnick confessed after the slender and fortunate win over Villa that he was at a loss as to why Rashford, taken off for Anthony Elanga in the closing moments, wasn’t playing well but the same could currently be said of numerous United players.

In Rashford’s case, there is some mitigation. His willingness to be moved right across the forward line sometimes counts against him – Solskjaer typically played him on the left side but caretaker Michael Carrick had him at centre forward, on the right and back on the left in three consecutive games. 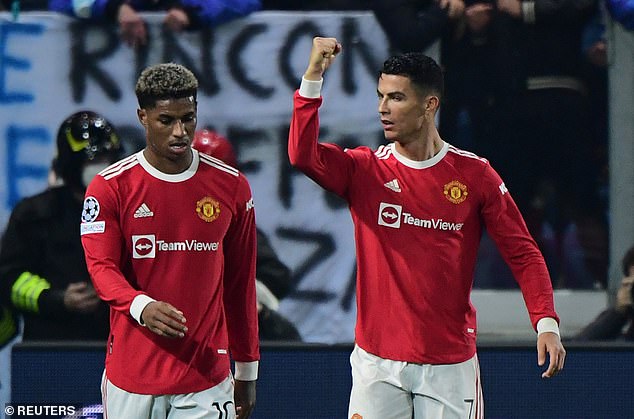 Rangnick’s default formation, so ill-suited to United because of its lack of width, saw Rashford once again shunted around and the team generally in a muddle.

The need to always accommodate Ronaldo also complicates matters but it seems Rangnick has been listening to the criticism as he reverted to the 4-2-3-1 formation his players are more familiar with on Monday.

Unfortunately, it didn’t pay immediate dividends with Villa dominating at Old Trafford and creating more than enough chances to progress.

It was another lacklustre showing from United and Rangnick cannot be relishing the prospect of taking on the likes of Atletico Madrid, Manchester City and Liverpool, as they will in March.

Of course, it wasn’t meant to be like this. After that defeat to Villarreal, Rashford also spoke of his belief that success was within touching distance for United. 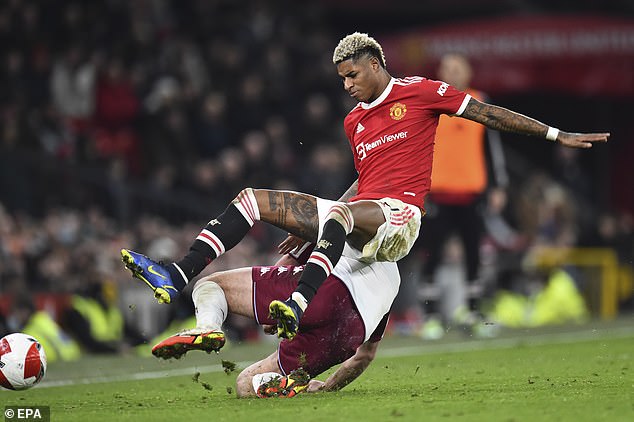 But this season is already looking like a complete write-off. The best they can hope for is fourth in the Premier League and vast improvement is required to win the FA Cup or the Champions League.

Boyhood United fan Rashford will be feeling this painful regression in standards keenly, especially after he’d done so much to carry Solskjaer’s team along last season.

Along with captain Maguire and creative spark Fernandes, United were very reliant on him last season and he ended up playing 4,146 minutes and 57 games while nursing his shoulder.

Instead of kicking on, United seem to be back to square one. The confidence has drained away from what should be a devastatingly effective attacking force.

Just one goal may return Rashford to his familiar scoring ways. Rangnick will certainly hope so as he grapples to rescue United’s season.