William Saliba is in line for an opening day debut after Arsenal suffered an injury setback over David Luiz.

Mikel Arteta’s most experienced centre-back Luiz is set to miss Arsenal’s trip to Fulham on Saturday, and perhaps longer, after aggravating a neck injury.

Arsenal medics were continuing their assessment of the 33 year-old on Wednesday to discover the extent of the injury amid fears he could be side lined for a minimum of four weeks. Luiz featured for Arsenal in their Community Shield win over Liverpool, lining up in a back three alongside Rob Holding and Kieran Tierney.

Luiz’s absence could open the door for Saliba, who has returned to the club after spending last season on loan at St Etienne following his £27m move from the French club to Arsenal.

Saliba has been training with Arsenal since the end of last season, featured in the club’s pre-season friendlies and was on the bench at Wembley.

Holding is also likely to retain his starting place after impressing Arteta, convincing the Gunners chief to shelve plans to allow the 24 year-old to join Newcastle on loan.

Arteta also has summer signing Gabriel Magalhaes available though he only began training this week after having to quarantine following his £25m arrival from Lille. 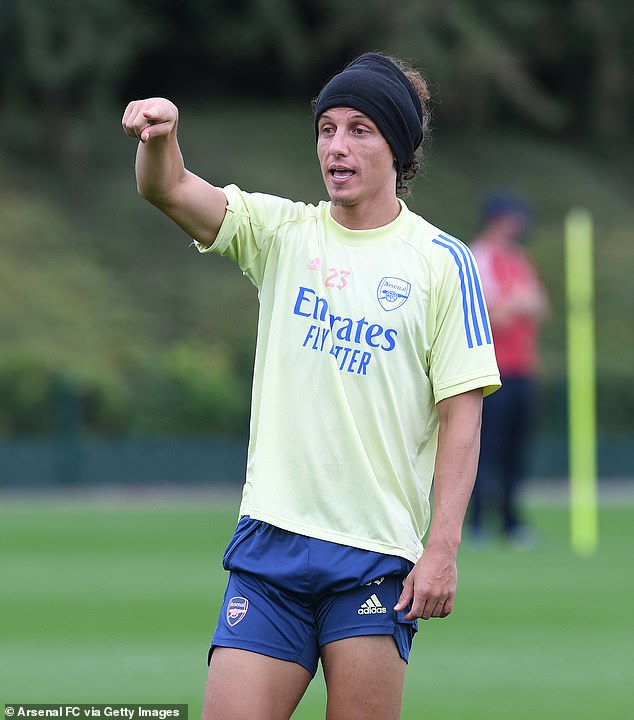 Of Arteta’s other centre-back options, Shkodran Mustafi and new signing Pablo Mari are out injured and Calum Chambers has only recently returned to training.

Meanwhile, Sokratis has fallen down the pecking order and is wanted by Napoli.

Arteta has a decision to make over who starts in goal too with Emiliano Martinez, who started the Community Shield, and fit again Bernd Leno waiting to find out who will begin the season as No.1.

Mesut Ozil has also declared he is ready to face Fulham after being frozen out at the end of last season.

Speaking during a Twitter q&a, Ozil said ‘I’m fit and ready and doing my best. Unfortunately it’s not in my hands to decide about the squad on the weekend. We will see!’