Home » Soccer » With no Bronze, Carpenter sets sights on more gold with Lyon

Two months after joining one of the most dominant sports team on the planet, Ellie Carpenter already has a UEFA Champions League winner's medal around her neck.

It's a piece of memorabilia that instantly vindicates her choice of club and puts the 20-year-old from Cowra in some truly esteemed company. The only other Australians to have scaled the heights of European club football are Harry Kewell, Zeljko Kalac and Craig Johnston. It took them a lot longer, too. 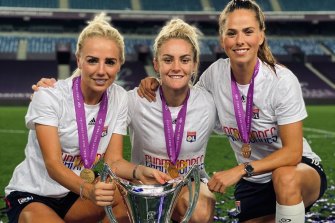 But the truth is Carpenter didn't do much to earn it. When Olympique Lyonnais beat VfL Wolfsburg 3-1 in last week's UEFA Women's Champions League decider, the Matildas star watched on from the bench as an unused substitute, knowing her moment in the spotlight was still to come.

Carpenter was only there because the final had been postponed by three months due to COVID-19. It was the perfect way to cap what has been an often surreal initiation at Lyon, who clinched an astonishing fifth Champions League title in a row.

"That's what they always want to do – win every single trophy possible," said Carpenter. "That was their goal and they achieved it."

But Carpenter's journey in France really begins this weekend, as Lyon launches into a new Division 1 Féminine season. No longer just there for the ride, the dynamic right-back will be a key part of whatever success comes next for the undisputed powerhouse club of women's football. 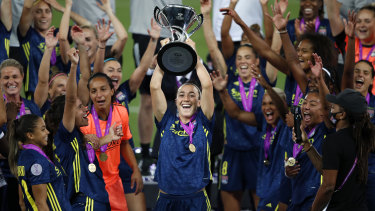 The exit of Lucy Bronze (centre) from Lyon has paved the way for Ellie Carpenter to be a regular starter for the club.Credit:Getty Images

"It was amazing to be in the squad and winning the Champions League," she said. "But hopefully this season it will be a bit different and this time next year, I have another medal and I've contributed a little bit more."

The reason Carpenter was biding her time was to allow Lucy Bronze, the English international who is regarded as one of the world's best defenders, to finish what she started that season.

Bronze, 28, has now left Lyon after three triumphant seasons. The baton has now been passed to Carpenter, who is expected to slot straight into the right side of a defence that, in 11 of the past 14 seasons, has conceded fewer than 10 goals in their domestic competition.

In each of those 14 seasons, Lyon has won the French championship. In all that time, they've lost just five league fixtures. Draws are only slightly more frequent, but the expectation is winning – always. No pressure, right?

As it turns out, no. "I don't feel much pressure at all," Carpenter said. "Most people are kind of saying 'you have to fill her [Bronze's] shoes' but I'm just going to play my game. The reason why I'm here is they think I'm good enough."

There is a revolution underway in European football. Mega clubs like Chelsea, Manchester City, Juventus and Real Madrid have awoken to the possibilities in the women's game and have begun spending their money accordingly, sparking an arms race that has, in turn, triggered a mass migration of key Matildas.

Ultimately, they're trying to catch up to Lyon, who have been setting the standard for years – which is why so many of the world's best players have been drawn to the club over the past decade.

"It's just all the little things," Carpenter said. "The facilities we train at, it's identical to the men. We have our own wing with everything – ice baths, a hot tub, physio, gym, our own pitches. 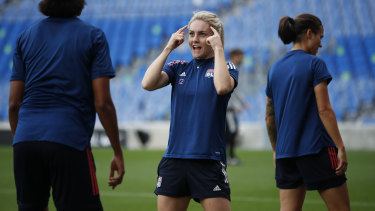 "We fly with a private jet all the time – wherever we go, away games, they treat us like they would treat the men. It's pretty crazy for me, I'm not used to that at all."

Carpenter admitted she felt a little nervous, perhaps even intimidated on her first day, walking into a dressing room with such big personalities and even bigger expectations.

But she's been welcomed with open arms and has relished the sheer intensity of Lyon's training sessions, which can only improve her as a player – and the Matildas as a team, as they embark on a long road towards a home World Cup in 2023.

"You know that every training is a competition – everyone wants to win, everyone wants to be the best," she said. "Say we're playing a five-v-five game. If your team loses, [they go] in the change room and they're so upset because they lost a little game in training. It's just so competitive."

"It just feels like I'm in a different world here," Carpenter said. "In Europe, in general, it's a whole different ball game – it's football, football, football. The other day we had a tour through the museum and it had all the history of the players, the coaches, all the trophies the team has ever won and it was incredible seeing that.

"It's such a great club and I'm so proud to be here, and so excited for my next three years. I guess I'm living the dream. It's quite surreal. I'm just so lucky."