Glasgow City’s Champions League campaign came to an end in humbling fashion with a 9-1 quarter-final defeat to Wolfsburg in San Sebastian.

Lauren Wade gave Glasgow some cheer with the goal of the night from 20 yards but Wolfsburg – European champions in 2012 and 2013 – showed again why they are among the main contenders for major honours.

Glasgow started brightly on a rainy night in the Basque Country, but the German champions soon began to dominate possession and territory.

Fridolina Rolfo saw a lot of the ball down the left but Glasgow held firm until Harder stamped her class on the contest after 15 minutes.

Harder played a neat one-two with Alexandra Popp and beat the slightly out of position Glasgow goalkeeper Lee Alexander from 18 yards.

Wolfsburg doubled their lead within four minutes as Engen was left unmarked from a Lena Goessling corner to head home from inside the six-yard box.

Glasgow attacks were rare but Samantha Kerr found space on the right before pulling back a cross which no forward could get on the end of.

Wolfsburg had more chances before the break as Alexander held Harder’s shot and Rolfo sent Svenja Huth’s cross wide at the far post.

The result was put beyond doubt in the closing stages of the first half as Engen swept home Huth’s 44th-minute cross and Harder smashed in a fourth from a well-worked free-kick. 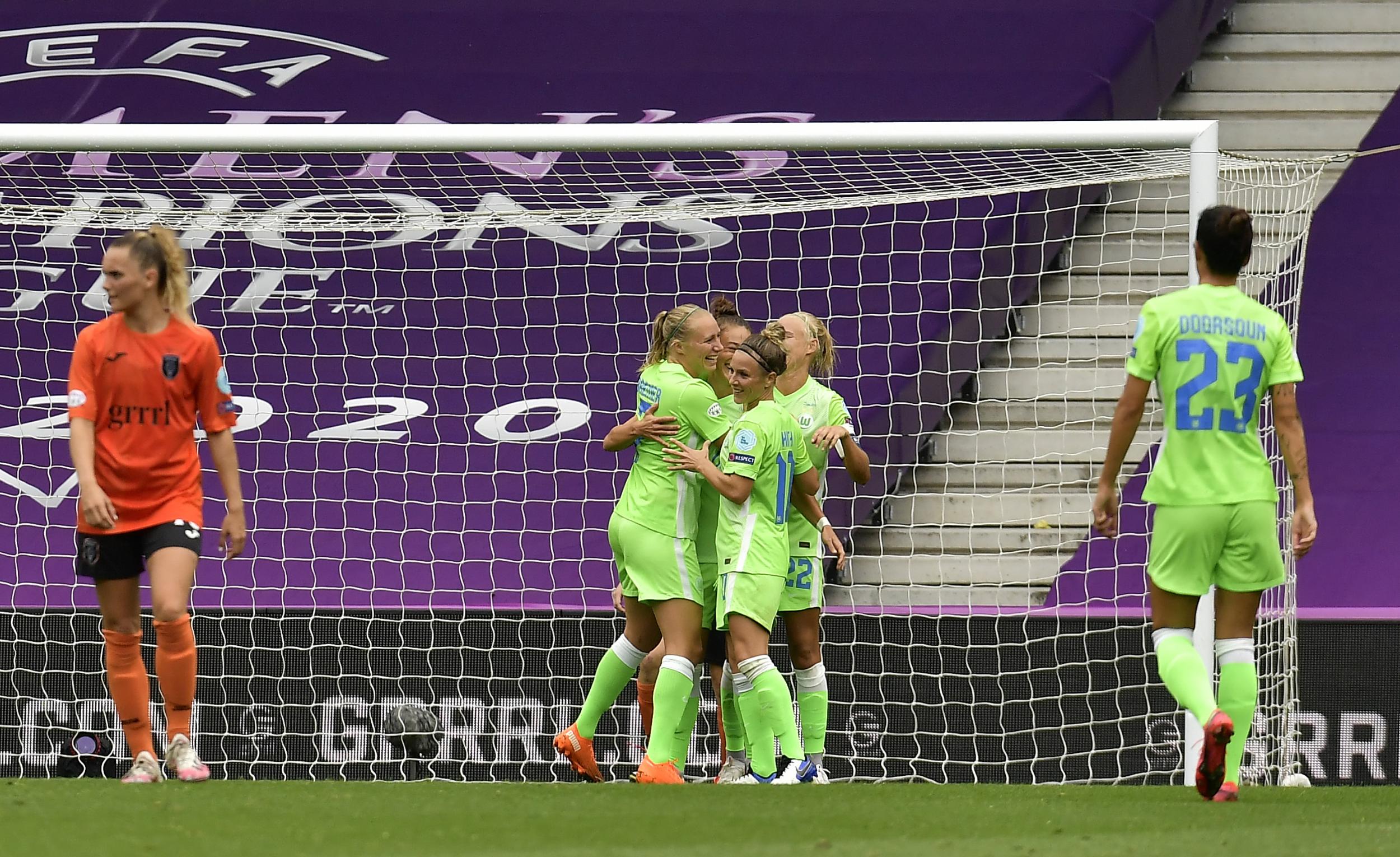 Harder completed her hat-trick after 56 minutes, heading home Huth’s cross, before Wade ran through to claim a superb consolation – her first goal since joining from Icelandic side Throttur Reykjavik in February.

Substitute Rauch added a sixth from close-range before Harder’s aerial prowess gave her a fourth on the night, and a ninth goal in this season’s competition.

Ross headed into her own net 10 minutes from time and, after Harder was denied a fifth by striking the crossbar, there was there was even more pain for Glasgow as Clark unluckily added a ninth.

Barcelona booked their semi-final spot against Wolfsburg with a 1-0 victory over Spanish rivals Atletico Madrid.

Kheira Hamraoui fired home the winner, a low drive, 10 minutes from time after the Atletico goal had come under increasing pressure.