Nervy Wolves booked a Europa League quarter-final with Sevilla after edging past Olympiacos.

Raul Jimenez’s penalty gave the hosts a 1-0 win in the second leg of their last-16 tie on Thursday to progress 2-1 on aggregate.

They will face five-time Europa League winners Sevilla in a one-off quarter-final in Duisburg on Tuesday with a potential semi-final with Manchester United waiting.

Nuno Espirito Santo’s side rode their luck and Mo Camara had a first-half goal ruled out by the tightest of VAR calls against Youssef El Arabi. They also endured an anxious finale, with Rui Patricio’s fine save denying Ahmed Hassan a leveller.

But Wolves continue to progress in a campaign which started over a year ago in the Europa League qualifiers.

It had been 147 days since the first leg in Athens and the hosts wasted no time in making their mark.

Jimenez lobbed a half volley wide inside the first minute after Joao Moutinho blocked a clearance, with Olympiacos’ defence looking instantly shaky.

It was then no surprise to see them implode after just eight minutes to gift Wolves an opener. After Ousseynou Ba’s tackle, the ball ran free and hesitancy gripped the visitors’ defence as they waited for Bobby Allain to clear.

It forced the goalkeeper into a heavy touch, allowing Daniel Podence to close him down and Allain, in for the injured Jose Sa, felled the former Olympiacos forward.

From the spot, Jimenez stroked in his 27th goal of the season and he had the ball in the next again soon after but was pulled up after Willy Boly’s foul on Allain.

Olympiacos, the Greek champions after winning the Super League by 18 points, needed to score before they kicked off thanks to Wolves’ away goal.

Patricio saved smartly from Kostas Tsimikas and the visitors’ threat appeared minimal until they gave their hosts a scare after 28 minutes.

El Arabi burst down the right and, with no flag, crossed for Camara to score via a deflection off Boly. It was a tight call whether El Arabi was onside and, following a lengthy VAR check, the goal was disallowed after it was ruled the striker’s armpit was offside.

It was a wake-up call for Wolves, who had also created little since the goal, and Olympiacos saw more of the ball without exerting any real pressure.

Pedro Martin’s side had gifted Wolves the advantage but refused to let them out of sight and El Arabi miscued a header under pressure from Boly 10 minutes after the break. 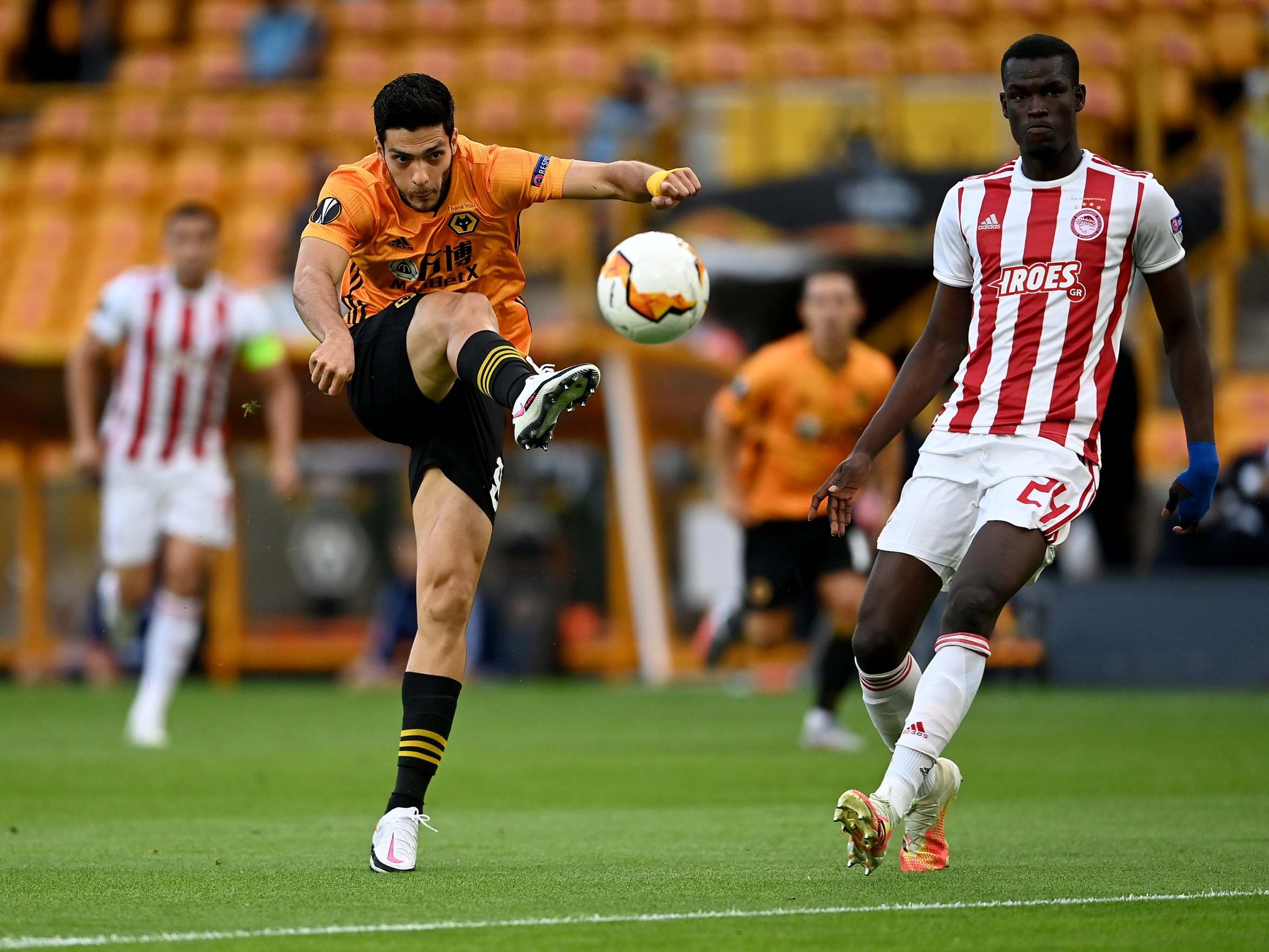 Olympiacos remained in the hunt but Podence almost put the tie out of reach when Allain turned his rising drive over just after the hour.

Boly failed to turn in Diogo Jota’s deflected effort soon after as Olympiacos’ search for a goal forced them to open up.

The tension was there, even within an empty stadium, and when El Arabi shot wide, slipping as he pulled the trigger.

Leander Dendoncker replaced Podence as Wolves looked to protect their precious lead and Guilherme almost sent the tie into extra time when his drive whistled over with 11 minutes left.

Two minutes later Patricio was the saviour when his reaction stop denied Hassan’s header after the forward was left unmarked as Wolves squeezed through.