This was the first defeat of the Ralf Rangnick era but not only that, it was deserved. In all honesty, it may even be overdue. Manchester United had been fortunate to beat bottom-of-the-league Norwich City before Christmas, then lucky to escape with a draw against an equally embattled Newcastle after it. Now, to usher in the new year, their comeuppance came against a side that had scored once in their last six games and twice in their last eight before Joao Moutinho’s late winner.

Wolverhampton Wanderers are having an uncertain season, having made a solid start only to suffer that scoring slump of recent weeks and months, but Bruno Lage has the highlight of his first year in charge so far: a win at Old Trafford that, on the balance of play, could have come a lot earlier. Aside from a brief United revival midway through the second half, Wolves were by far the better side, creating several chances yet, true to form, failing to put them away.

That was until Moutinho’s intervention, a low, drilled shot with eight minutes remaining after the returning Phil Jones failed to adequately clear Adama Traore’s cross beyond the edge of the penalty area. That moment did not reflect Jones’s overall performance on this first appearance for the best part of two years. If anything, he looked sharper than many of his teammates, which should say everything about the level of performance on display.

United were unbeaten in eight since Ole Gunnar Solskjaer’s departure before this game but this should prove once and for all that, while a change was absolutely necessary, he was far from the only problem. Rangnick has many such problems to solve. The apparent failure to adopt his preferred style of high, intense pressing has to be a priority as this passive, lethargic display was a far cry from what was advertised upon his appointment.

Perhaps the lack of changes from last Thursday’s win over Burnley played a part. Rangnick made just two alterations to that line-up, Jones one of them. No United player has had a longer gap between Premier League appearances than the 712 days between Jones’s last outing and this unlikely return. Alongside Jones was Raphael Varane, forming a centre-back partnership that Sir Alex Ferguson attempted to forge during a summer transfer window 11 years ago. 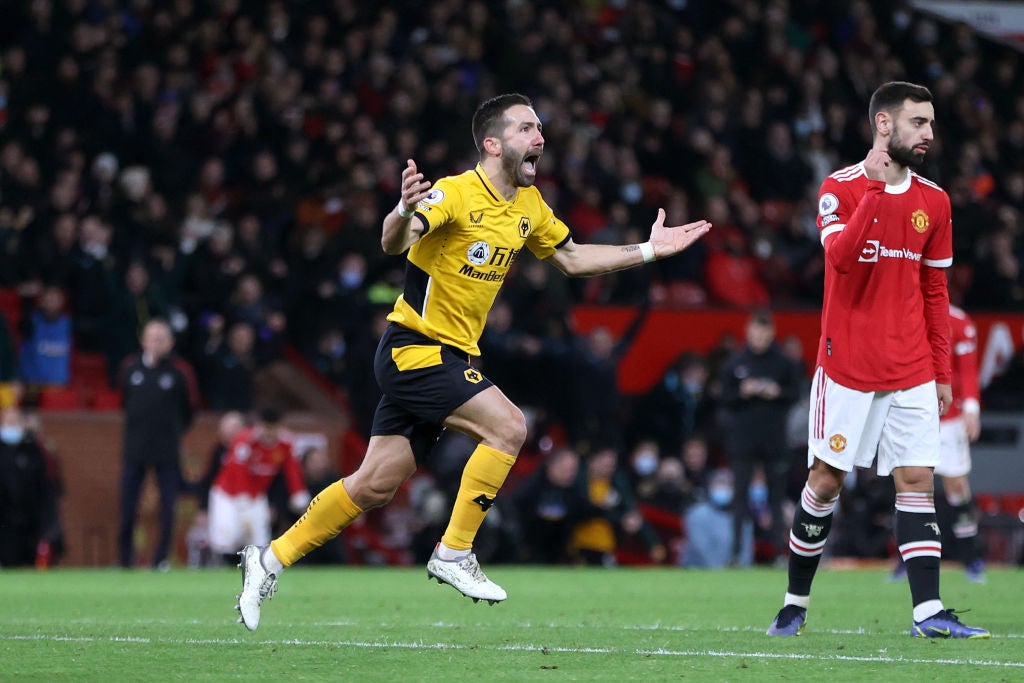 This throwback of a defence may have been confident of a clean sheet before kick-off. Wolves’ inability to score has looked like a chronic issue over the past few weeks. It is not as though they have been posing much of a threat either, averaging 10 shots a game. United’s first-half performance was so passive without the ball though, that they had managed that many by the half-hour mark.

If you had to guess which United player had not played for two years during that abysmal first half, you would have gone through the vast majority of them before reaching Jones. United’s longest-serving player swept up and beat away several of Wolves’ many attacks, but the only others to go back down the tunnel at the break with any credit were the lively Mason Greenwood and David de Gea, who seemingly needs to play well every week at the moment.

The quantity of Wolves chances was greater than their quality but, nevertheless, they should have gone in ahead. Daniel Podence twice tested De Gea’s reflexes with attempts that were creeping in at the near post, while an even greater display of acrobatics was required to tip the customary Ruben Neves long-range sighter over the crossbar. United were being played through again and again.

The most egregious defensive error came from an unlikely source and the captain for the day in Harry Maguire’s absence. Cristiano Ronaldo, despite his 47 goals scored across all competitions last year, inexplicably headed the ball back into his own penalty area, almost putting Raul Jimenez through one-on-one. Wolves fluffed the opening and Jimenez was eventually flagged offside but it was yet another let off.

Something had to change. In the opinion of some inside Old Trafford, that something wasn’t Greenwood, but Rangnick replaced United’s brightest spark on the hour mark. The decision was greeted with a smattering of boos emanating from the Stretford End but the change precipitated an improvement. Perhaps that was no surprise, given Bruno Fernandes was now on the pitch.

Fernandes’s role has changed since Ronaldo’s return and his recent form has been poor, to say the least, but he is still the player in this side most likely to make things happen. Within a few minutes of coming on, he struck the crossbar from six yards out after a smart cut-back from the byline by Nemanja Matic. Ronaldo headed in from a free-kick that followed that passage of play but from a clearly offside position.

United finally had their backs up, at least, but Wolves had a potential game-changing substitute of their own. Adama Traore’s late introduction meant that United’s search for a winner could be counter-punched. When one Traore breakaway resulted in a Matic foul and free-kick on the edge of the box, Romain Saiss struck the top of the crossbar. As wasteful as they had been, Wolves only needed to get lucky once. They did, when the ball dropped kindly for Moutinho. United could have no complaints.

Danny Higginbotham left opponent lifeless from challenge that ‘scared’ him