It is foolish to read too much into the first game of a new season for any team but this was something of a litmus test for Manchester City and one that they passed, just.

Kevin De Bruyne’s penalty, a superb team goal finished off by Phil Foden and a late Gabriel Jesus clincher would ultimately prove enough to beat the stubborn Wolves, even if Nuno Espirito Santo’s side had made the final stages interesting by clawing a goal back through Raul Jimenez.

Wolves were responsible for two of City’s eight defeats last season and were the type of side that Pep Guardiola’s players struggled against – upper mid-table, defensively organised and lethal on the counter-attack. Molineux, meanwhile, is perhaps the ground on which last season’s Premier League failed title defence finally fell apart.

That Christmas-time defeat in last season’s corresponding fixture – arguably the best game of the top-flight season – saw City surrender a 2-0 lead in the second half and, with it, the faintest hope of catching runaway leaders Liverpool. Yet nine months later, with Molineux empty rather than rocking, there would be no collapse.

Wolves came on strong after the interval again, but the damage had largely been done early on. City impressively shook off their lack of a pre-season – and three positive tests for Covid-19 to first-team players in the past week – to pick up where they left off as the form team of Project Restart.

It quickly became clear that Wolves would have to be disciplined to get a result, with City setting up in their half and dominating possession from the first whistle, but their resistance lasted all of just 19 minutes. Romain Saiss is known to be rash in the tackle every so often and he thoughtlessly slid in to clip De Bruyne on the right-hand edge of the penalty area.

The reigning PFA Player of the Year stepped up to rifle his fifth straight successful penalty low and hard to Rui Patricio’s left. It is difficult to say what’s more surprising: that City’s record from the spot was so poor last season – with only 10 of 16 penalties scored in all competitions – or that it took so long to make De Bruyne their undisputed first-choice taker.

City’s second was sublime, the type of goal that only they and a handful of others are capable of scoring at this level. All four of members of Guardiola’s attacking quartet were involved in a short, sharp exchange of one-touch passing on the edge of box until Sterling slipped in behind and squared for Foden to finish.

Usually so compact and dependable, the Wolves defence had been torn apart. By contrast, City’s new centre-half partnership of debutant Nathan Ake and John Stones had barely broken a sweat. 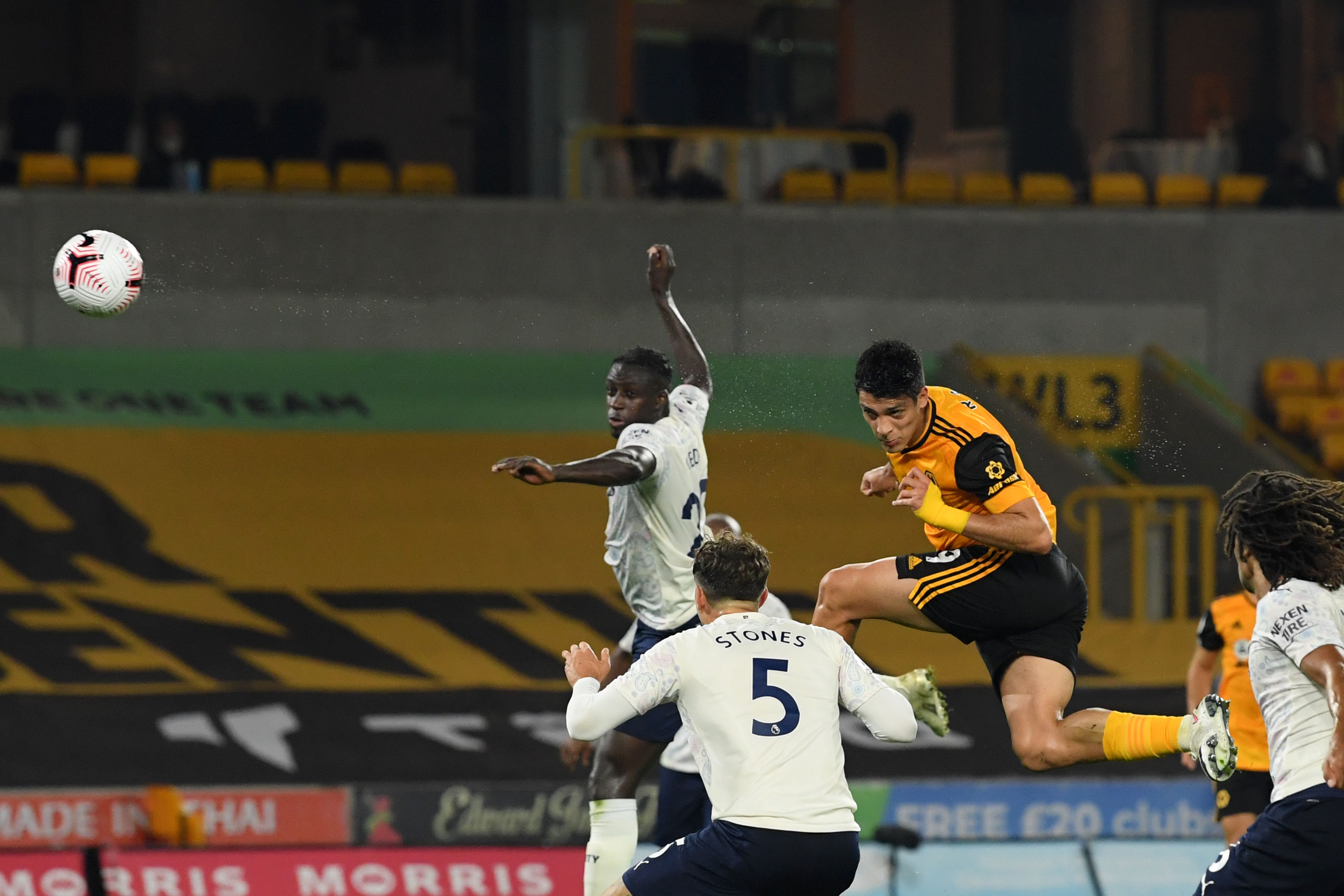 That would change at the start of the second half once Nuno had picked out a potential weak link in City’s rearguard. Around the hour mark, a flurry of Wolves chances came down City’s left, each of them low and hard crosses cut back to the edge of the area. Traore and the young Pedro Neto were taking turns to torment Benjamin Mendy, but De Bruyne was the one left red-faced when Wolves’ goal eventually came.

After seeing his corner cleared, Daniel Podence retrieved the loose ball then bypassed De Bruyne with a nutmeg. The January signing from Olympiakos bent a cross to the near post for Jimenez – a relatively muted presence, up to that point – who sent an authoritative header past Ederson.

A final Wolves push for an equaliser felt inevitable but never truly transpired. Instead, it was Jesus who ensured that all three points would return to Manchester with effectively the last kick of the evening. After using his strength to win a loose ball out on the left, Sergio Aguero’s deputy snuck in with a shot that deflected off Conor Coady and beat Patricio.

Last year, City succumbed. This time, they had survived. Guardiola will hope that this was a sign of things to come.