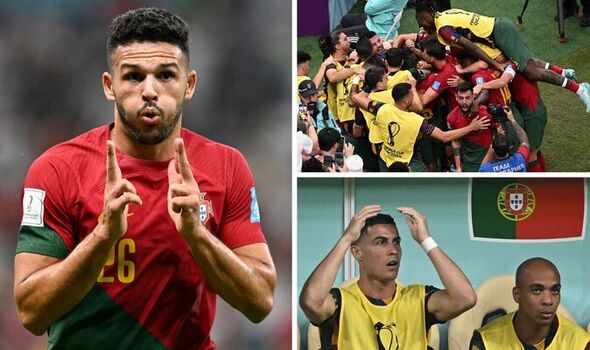 England boss Gareth Southgate is preparing his side for one of the biggest games of their lives when the Three Lions face France in the World Cup quarter-finals on Saturday. The 2018 semi-finalists know they will have to deliver their best performance of the entire tournament if they are to dethrone the defending world champions by stopping Kylian Mbappe in his tracks.

The Paris Saint-Germain superstar is romping his way to the World Cup Golden Boot having rattled in five goals in four matches for Les Bleus.

But if anyone can stop the jet-heeled 23-year-old, England’s Kyle Walker certainly has the capabilities to do so as the mouthwatering match-up edges closer.

Croatia and Brazil booked their place in the quarter-finals on Monday with hugely contrasting victories over Japan (penalties 1-1 AET) and South Korea (4-1). The two teams will now meet in the last eight on Friday (3pm).

Euro 2020 semi-finalists Spain will seek to join them today when they take on Morocco (3pm) before Portugal lock horns with Switzerland later this evening (7pm).

England boss Gareth Southgate has hinted he will be sticking to his guns and keeping a back-four against France – despite an expectation he could switch to 3-4-2-1.

Much has been made of the need to stop Kylian Mbappe but Southgate seems unlikely to switch up England’s successful 4-3-3 blueprint out of respect for their world-class opponent.

“We’ve always got to get the balance of the team right,” Southgate said.

“You’ve obviously got to make allowances for the opposition and find out where you can exploit them but we’ve got good players to come in as well.”

England’s World Cup stars enjoyed a relaxing day around the pool on Monday after beating Senegal 3-0 on Sunday night to reach the World Cup quarter-finals.

Video footage was posted on England’s social media channels of Jack Grealish and Declan Rice having some fun following a hard-fought yet convincing victory over the Africa Cup of Nations winners.

The pair displayed their remarkable touch and control before passing the ball back across to the other side of the swimming pool.

Rice then dived into the pool before urging Grealish to set him up for a header.

All players that featured in the win for England took part in a recovery session in the morning while the rest of the Three Lions players that were not involved, trained at training base.

Callum Wilson missed the session through a slight strain.

Neymar feared World Cup was over

Neymar was back for Brazil and on target in their one-sided 4-1 demolition of South Korea on Monday night.

But the Paris Saint-Germain forward has revealed he feared his World Cup was done when he picked up an ankle problem against Serbia in his side’s opening match.

“I only have words of thanks to the fans for all the love they sent my way when I got injured,” Neymar said after netting in the demolition of South Korea.

“I spent a difficult night after getting injured and was afraid I would not play in the World Cup again.

“But I had the support of my colleagues and my family and I tried to find strength where I could not find it.

“Reading the messages the fans sent was also very good for me.

“Perhaps the best way I can say thank you is to do whatever I can to help the Brazilian team to win the tournament. That’s our mission, that’s our dream.”

When is Southgate naming his England squad?