The Socceroos’ penalty shootout victory over Peru to qualify for the 2022 World Cup is set to deliver a $17 million pay day for Football Australia.

The Qatar tournament will be the richest-ever World Cup, with a total purse of $US700 million ($1 billion) set aside for the competing teams. Football Australia are already guaranteed a group stage appearance fee of more than $14 million as well as just under $3 million as a qualification bonus, set aside to cover travel and accommodation for the tournament.

Under the terms of the Socceroos’ collective bargaining agreement, the players stand to earn 40 per cent of the group-stage appearance fees as well as a 50 per cent share of any prizemoney for reaching the knockout stages.

In real terms, that means $226,000 per player for inclusion in the 23-man World Cup squad and an additional bonus of about $290,000 per player if they reach the round of 16. To do so, Australia must finish in the top two of Group D which includes defending champions France, Denmark and Tunisia.

While FA’s windfall is substantial, much of it will be absorbed by costs such as player bonuses, staff wages and logistical costs. FA forecasts the profit after costs will be around $5 million for a group-stage appearance.

“It goes beyond finances,” chief executive James Johnson said. “Twelve months ago we had two teams competing at the Olympics and both teams did rather well. The Olyroos beat Argentina and the Matildas got to the semi-finals. We have now qualified for the men’s World Cup. We are hosting a women’s World Cup.” 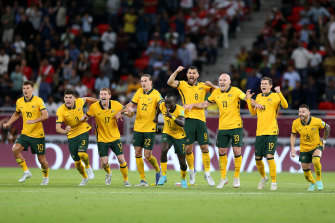 Andrew Redmayne’s Socceroos teammates celebrate after the keeper’s crucial save in Doha.Credit:Getty

Much of the profit will be set aside for funding a national second division and a women’s national cup competition. FA is eager to improve player pathways with more games across women’s and mens football, in particular by introducing a second professional league to sit below the A-League.

“We have work to do with the pathways, transfer systems, legacy – that’s all to come. But right now, we can be a very proud football nation,” Johnson said.

A-League clubs will also financially benefit from the World Cup. FIFA has set aside a pool of $300 million in club compensation payments, which means A-League clubs will be compensated for any player selected who has played for that club within the last two seasons.

At the 2018 World Cup in Russia, A-League clubs earned a combined sum of $1.53 million in compensation from FIFA.