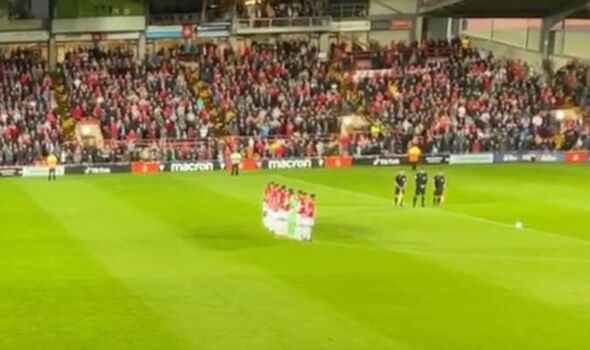 A group of Wrexham fans could be heard loudly booing during a minute’s silence that was planned to honour Queen Elizabeth II following her death last week. Fans of the National League were asked to participate in the tribute to the long-reigning monarch, who died on September 8 at the age of 96, but seconds later boos could be heard coming from the stands.

Footage uploaded to social media appeared to show the moments before Wrexham’s match against Dagenham and Redbridge at the Racecourse Ground where fans from the Welsh club interrupted a tribute to the Queen.

A voice over the tannoy system asked fans to participate in the tribute, with the players gathered arm-in-arm on the centre circle and coaching staff on the touchline.

But the fans showed their opposition as a small spattering of boos eventually turned into a much louder chorus from a group of fans. There appeared to be some angry members of the crowd who demanded the dissenting voices to be silent and show respect and eventually, they quietened down as the rest of the tribute played out.