That’s got to hurt! Yeovil’s Tom Knowles smashes a terrible penalty wide and into the FACE of pitch-side steward and knocks his hat off in FA Cup shootout with Weymouth… but he cheers to the fans to laugh it off

An unsuspecting steward felt the full force of a mis-hit penalty on Tuesday when Yeovil Town forward Tom Knowles accidentally hit him in the face with his spot-kick.

The Glovers were forced to play out a penalty shootout with old rivals Weymouth in the final qualifying round of the FA Cup, with the winners booking their spot in the first round of the competition.

With Weymouth missing three of their first four penalties, it was up to Knowles to book Yeovil’s spot in the first round proper, with a successfully converted penalty enough to send the National League side through 3-1. 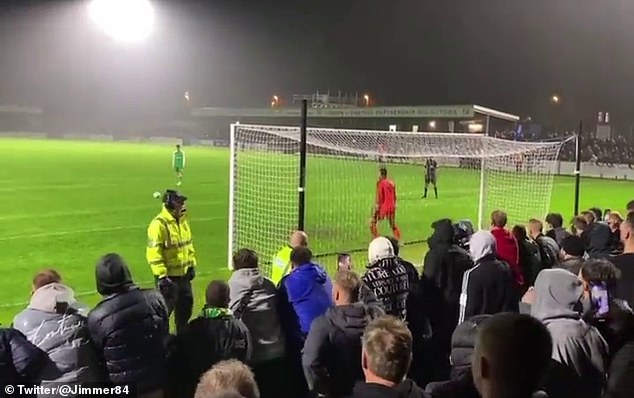 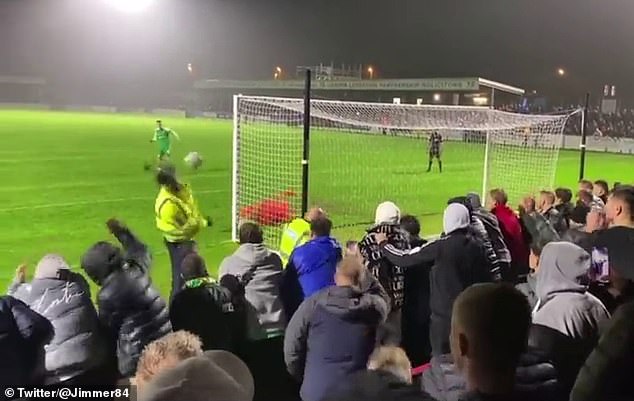 However, Knowles sent his effort wide of the goal, which then smashed a steward in the face

But as Knowles stepped up to take the spot-kick, the pitch-side steward took his place to the right of Ross Fitzsimons’ net, casting a keen eye over the fans behind the net.

With his attention off the action, the unnamed steward had little time to react when Knowles horribly shanked his effort wide of the upright, with the ball travelling at speed.

And as luck would have it, the steward turned directly into the oncoming ball before smacking him in the face. 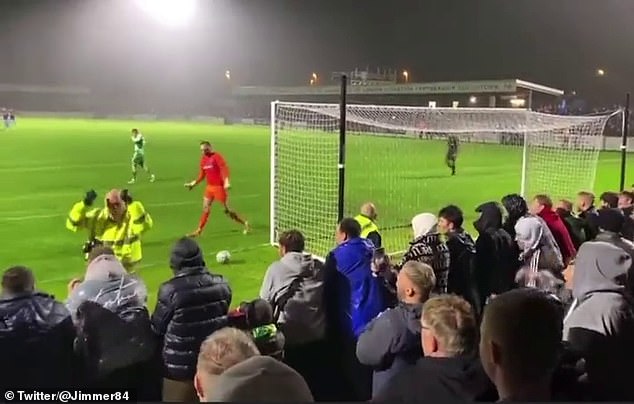 While the shot would have almost certainly stung, the steward admirably didn’t let the incident dent his pride as he laughed off it off with the travelling supporters behind the goal.

Yeovil Town supporter James Healey managed to capture the moment on camera, which saw onlookers gasp before cheering after noticing that the steward was all right.

The video has since been doing the rounds on Twitter, with many fans wincing at the incident.

One fan applauded the steward saying, ‘he took it like a champ’ while another questioned how he was still standing after being struck by the ball.

Another eagle-eyed fan noticed how the steward’s hat was knocked off his head, given how hard Knowles struck the ball.

Darren Sarll’s men did eventually go on to win the shootout after Weymouth incredibly missed their fourth spot-kick of the night, sparking scenes of celebrations for the visitors.