Home » Soccer » ‘You are in complete remission’: The news that made an Olympic defeat an afterthought

Rebekah Stott could have been downcast as she watched her New Zealand teammates lose to the Matildas in the opening game of the Tokyo Olympics last month.

But the Melbourne City and international defender was over the moon, despite the Football Ferns’ defeat, as that morning she had seen her cancer specialist and been told the words she was longing to hear: “Your scans have come back clear, and you are in remission.” 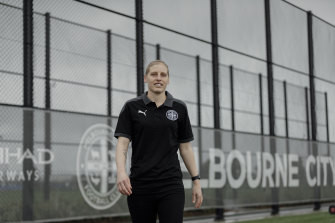 Melbourne City and New Zealand footballer Rebekah Stott is looking forward to returning to action after undergoing treatment for cancer.

“It was the day of the Australia v New Zealand game that I found out I was in remission,” the 28-year-old said.

“I sent a group message to my team and let them all know. I got so many messages back saying how happy they were for me, they were so stoked with my news.

“I was expecting it because I had a scan after my second cycle [of treatment] but to hear the words ‘you are in complete remission’ was pretty incredible. I was so relieved and so happy, really ready to get on with life and try to get back to normal.

“I was gutted not to be there in Tokyo, but it was kind of cool to be a spectator and watch everything on TV. It was bittersweet, but I was the Ferns’ biggest supporter. ”

Getting back to normal for Stott, who discovered she had Hodgkin’s lymphoma after feeling a lump on her neck last winter and seeking advice from City’s medical staff, will be strenuous as a recovering cancer patient. 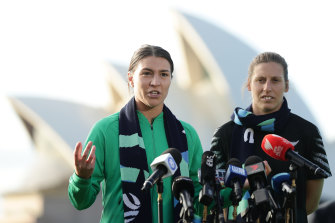 Rebekah Stott and Steph Catley during a media conference for the 2023 FIFA Women’s World Cup, in June last year.Credit:Getty Images

She started getting back into shape by turning out for Bulleen in the Victorian WNPL but has her sights set on being in City’s line-up when the next W-League season kicks off in November.

Her biggest goal is to play for the Football Ferns in the 2023 World Cup, which will be jointly hosted by New Zealand and Australia.

“I physically feel good,” she said on Thursday, when she spoke of her gruelling chemotherapy treatment.

“My body can get quite sore but it’s all about making sure I am doing the right things now.

“Emotionally, it was a hard time in my life, and it still is. I am still mentally recovering, but I have a lot of support to help me around that.

“I am so excited about returning to football. It’s hard at the moment with lockdown, it’s not like I can be in a team training situation. But I am so looking forward to getting back onto the field and to play for City.”

Like many who have had to confront mortality, her diagnosis and treatment have given her a changed perspective, and a realisation of what is important to her, particularly playing soccer.

“I didn’t realise quite how big it was [coming back to play] until I got the first 10 minutes in the local league here. It felt incredible.”

Returning to play in the World Cup would be the icing on the cake, she said. “Having the 2023 World Cup on home soil is the biggest motivator for me. I never ever had a doubt that I wouldn’t be making it to then.”

Stott is now a mentor to young people with cancer, and has designed a “cancer bag” which she wants to give to all teenagers who need to go into hospital for treatment.

“In my early appointments I was pretty unorganised and all over the place. I came home from one thinking ’I need a cancer bag, somewhere quite nice to put all my stuff. That created the idea. My bag is going to be filled with my beanies, a drink bottle, heat pack, different skin care products and things I found really helpful.

“Those bags will be going towards CanTeen [a support group for young people with cancer] patients. I am trying to raise money to give them to kids so it makes their job a little bit easier.”