Tour de France organisers have withdrawn their protest against a vilified roadside spectator who caused a huge crash at the race, one day after she was taken into police custody.

The change in tone comes amid claims from riders and team sports directors that a lack of respect in the peloton is one of several factors contributing to what has been a horribly crash-marred opening week.

An Amaury Sport Organisation spokesman on Thursday said race director Christian Prudhomme had dropped a purported lawsuit against the woman and had asked for everyone to calm down.

The fan has been levelled with vitriol since the opening stage in which Tony Martin (Jumbo-Visma) rode into a cardboard sign she’d been holding out and brought down or held up virtually everyone. 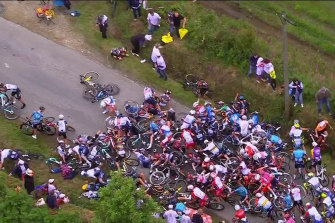 An aerial view of the crash caused by a person with a sign on the first day of the Tour de France.

The woman appeared to have been flashing the sign dedicated to her grandparents at an overhead TV camera with her back turned to the approaching peloton, which was fanned out across the road.

“Fans have been around for a long time and fans have been knocking riders off for a long time too. If she gets a really massive fine and goes to jail it’s probably a bit hardcore,” BikeExchange road captain Luke Durbridge said. “I remember Lance [Armstrong] getting taken down by a musette on a famous climb back in the day and I don’t know if [the fan involved] got fined!”

Multiple crashes with disastrous consequences for some riders have punctuated the beginning of the three-week race but only one of them has been caused by a spectator.

Top-billed Australian sprinter Caleb Ewan (Lotto Soudal) fractured his collarbone in four places and abandoned the Tour following a touch of wheels in a high-speed crash that also took down Peter Sagan (Bora-hansgrohe) in the stage three finale on Monday. Title contender and 2020 Tour runner-up Primoz Roglic (Jumbo-Visma) was involved in an earlier pile-up the same day. Roglic’s soldiered on swathed in bandages but his immediate focus is now on recovery, not the yellow jersey.

The first week of the Tour is always prone to crashes because riders are fresh, nervous and the opportunity to win stages and wear jerseys is more open than when the race hits the mountains. It’s just that this year they’ve happened in quick succession and high-profile athletes have been compromised, so they’ve been more pronounced.

Durbridge doesn’t believe there has been any more crashes than usual but said they have been bigger.

“Ever since growing up as a kid I remember watching massive crashes in the Tour. I don’t know, maybe I’m in it or maybe I’m getting older, but the first three days were very stressful,” he said. 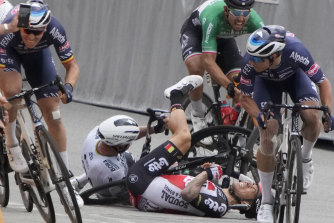 “The finals are just starting so far out. That’s the difference. It was always going to be stressful, the last 40km, last 30km, but these finals are starting 80km out. We’re starting to jostle for position with 80km to go, which is just ridiculous really.

“We riders have less respect for each other and there is a lot more at stake. The riding at the front tactic is generally the safest place to be but the crashes are all happening at the front because so many people are trying to get to the front.”

The approach to the finish of stage three had apparently worried some competitors, who raised concerns about the safety of the course with the CPA rider’s union before the start. However, teams still raced hard and a go-slow protest at the beginning of stage four the next day, which not everyone agreed with, seemed mute.

The Tour route was announced on November 1, so teams and riders had ample time to recon stages and voice concern before the day of.

“The organisers aren’t going to change the route. You can put your hand up all you want,” said BikeExchange sports director Matt White.

“Everyone has got the tools to have a look. You can either recon it yourself before the race starts, you can send people out at the front of the race, and also everyone has got the GPX files to these races. Anyone who hasn’t looked at them before they get there hasn’t done their research.”

Tour riders are the most protected they’ve arguably ever been from fans and especially the media this edition, which is operating under pandemic-related restrictions. But rider safety is an ongoing issue in the sport dictated by politics.

Speaking the morning of the stage four protest, Sagan, who injured his knee and the side of his leg in the crash with Ewan, was resigned to thinking that nothing would change and cyclists will compete, as they have, regardless of if it does or doesn’t.

“What is going to change?” Sagan said when asked about the go-slow.

“The last 10 years it’s only worse and worse. Who is going to take responsibility? I’m asking myself, where is CPA with all this? The organisation for this, what are they doing? Nothing.”

The final three-kilometre rule, the marker where the title contenders are safe from losing time and so move back from fighting for position against those going for a stage victory at the front of the peloton, is what many have identified as a key contributing factor in crashes this week. Suggestions to extend the marker from three to eight, or even 10km from the finish line have been made.

“Everyone is fighting for the front, which heightens the tension. Nothing will change unless they change the rules. It’s as simple as that,” said White.

“This is the biggest event of the year and people are all just looking out for themselves. Talking to our guys in the bus as well is, there is a general lack of respect for each other in the peloton. There are guys who are taking a lot of risks. You hear stories from the guys of people pushing each other out of the way, grabbing each other. That didn’t fly that long ago.

“So, when the trend is that’s acceptable it heightens the danger. There’s a lot of contributing factors to why there is crashes. One, it’s the biggest race of the year. There’s a lot of things on the line, especially in this first week. Two, the courses can always be safer. Three, the general respect in the bunch. And the fourth one is the rules, the rules can be changed.”

Sports news, results and expert commentary. Sign up for our Sport newsletter

Silverwood is backing Ben Stokes to take England all the way