Ben Dunk is adamant he can still turn around his underwhelming Melbourne Stars stint as the veteran batsman looks forward to a socially distanced reunion with his family.

Dunk, 33, arrived in Hobart with the rest of the Stars squad on Wednesday ahead of the Stars' meeting with the Hobart Hurricanes on Saturday. 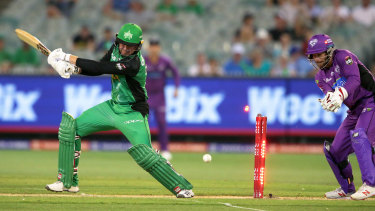 Ben Dunk of the Melbourne Stars.Credit:AAP

Having joined the Stars in mid-2017 on a lucrative five-year deal, Dunk has struggled to consistently make runs, averaging just 16.72 at a strike rate of 116.57 from 38 innings. He was demoted to be one of the X-Factors in Tuesday night’s loss to the Sydney Thunder in Canberra but made a quick-fire 21 from nine balls, a reminder that he may not yet be a spent force.

Dunk, originally from Queensland, now lives in Tasmania with his wife and two children, but as his family chose not to join the Big Bash League's hubs, he was set to see them on Wednesday in an outdoors and socially distanced environment.

Hubs are increasingly the norm for Dunk, who spent bubble time this year in both the Caribbean Premier League and the Pakistan Super League.

"It's been a pretty lonely year. I've spent a lot of time in quarantine and in hubs and that kind of thing," Dunk said on Wednesday.

"But that's my job and it's a choice I've made to continue doing that. As anyone does, you have good days and bad days but you have to remind yourself that there's a lot of people out there that are less fortunate. As sorry as I sometimes do feel for myself, you have to have a dose of perspective."

And while he has been unable to regularly fire for the Stars, he isn't counting the remainder of his deal as a write-off.

"I've actually performed really well in overseas leagues, but unfortunately my performances for the Stars haven't quite reflected to the same degree they have overseas. But I've been in cricket a long time and know that if you stick at it, hopefully, those performances turn around," he said.

Dunk was meanwhile singled out earlier this month for his decision not to take a knee in support of the Black Lives Matter movement while other players chose to do so. Reluctant to delve into his reasons for not doing so, Dunk said teammates had not criticised his choice.

"I don't really want to go too deep into it. But I do believe there's no place in sport or cricket or in our general public for racism," Dunk said.

"We were encouraged to acknowledge the moment in our own way and I did that by taking my helmet off, or hat off, and bowing my head. But I certainly respect all of my peers on my own team and other teams and their right to take a knee if that's what they want to do.

"[Teammates] were really good in terms of providing some education for me around some of the challenges people of colour and race go through every day. I'm clearly not one of those people, so I have no idea. I think what's more important than the stance is the behaviours that you show. I'm confident that my behaviours are reflective of positive change in the community."

Meanwhile, Tasmanian quick Sam Rainbird is likely to replace injured paceman Nathan Coulter-Nile who is set to miss three to four weeks with a calf injury.