It's a measure of the first tied Test's hallowed place in cricket history that more than half a century later, the least-sung player in the match could hold an international Zoom conference in his thrall on Wednesday as he talked about the match-winning role he played in two signal moments at the climax – by getting out of the way.

Peter Lashley, a Barbadian left-hander, was on debut in that fabled encounter, played at the Gabba 60 years ago this week. In the second innings, he was bowled second ball by the great leftie Alan Davidson. In the way of cricketers and their non-biodegradable and fully searchable memories, both recall it still, vividly. 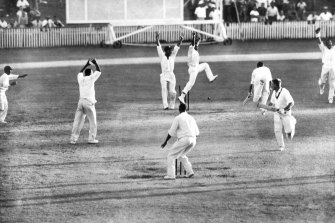 The first of only two tied Test was played by Australia and the West Indies.Credit:Ron Levitt

"I was bowling from the pavilion end. I bowled from the extreme outside of the crease," said Davidson, now 91. "It was an outswinger to him as a left-hander and unfortunately the ball went outside the outside edge and knocked over his off stump."

From Bridgetown, 83-year-old Lashley nodded slowly. It was dearth of megs, not memory, that gave him pause; he was right across this. "It was a very good ball," he said. "You moved to the edge of the crease, bowled a slower ball and it swung, and I was completely at sea. A very good ball – but if you bowled it to me again, I don't think you would get the same result."

Smiles creased the faces of both, also those of 86-year-old Lance Gibbs in Miami and 91-year-old Neil Harvey, sitting alongside Davidson at the SCG. Even when strained through the warp and weft of the web, the mutual love was apparent as they bathed together in warm recollections of the greatest match in the greatest series, recollections that sustain them still as they approach and enter their nervous 90s. They might not have called it love then, but it was, and is.

Lashley need not have been ashamed to get out to Davidson. He took 11 wickets in that match, including captain Frank Worall, twice, and Garry Sobers, and made 124 runs across two innings and until he was run out in the second-last over was going to win it for Australia, and managed all this despite breaking the middle finger of his bowling hand the night before the match while practising close catches with captain Richie Benaud. After a fitness test on match morning, Don Bradman said: "We'll take the risk and see how we go". 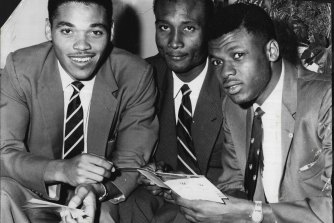 That was the spirit of the moment, enjoined by Bradman and acted upon with gusto by captains Benaud and Worrall. It inspired a match and series that revitalised what had become a moribund game, was played not only without rancour, but in conspicuously noble humour throughout, attracted a then record crowd of 90,800 one day to the MCG and when it was over prompted a ticker tape farewell parade through the streets of Melbourne for the departing West Indians.

"It seemed like Australia had come out to see us off," said Lashley. "I thought that was a wonderful gesture the Australians gave the opposition. When you get that sort of respect, it stays with you."

A tie had become a tide. Cricket sometimes does this; it exceeds itself. At the Gabba, Davidson, for all his heroics, might not have swept all the man-of-the-match votes, since Norm O'Neill made 181 and Sobers made 132 and Wes Hall took nine wickets and made a half-century at No.10 … and then along came Joey Solomon.

From 6-92 chasing 233, Davidson and Benaud had put on 134. Now there were only seven to get. In the Australian changerooms, no one dared to move. In the West Indies room, Gibbs, one day to hold the world wicket-taking record, but on this occasion 12th man, could barely watch.

On the field, Lashley hewed close to Worrall. "I had a couple of decisions to make and thank goodness I made them," he said. The first was when Benaud turned Sobers to leg and called Davidson for a single. "Joe Solomon isn't the fastest runner in the world. I'm not fast, but I'm a little faster than he is, or was," Lashley said.

"He said, 'move, move', and I moved out of the way and he came through and threw down the stumps." Exit Davidson for 80.

In the last over, Benaud was caught behind and Wally Grout run out, and then with the scores level, Lindsay Kline nudged the second-last ball to leg, towards Solomon and Lashley again. "Again, 'move, move', and I moved out of the way," said Lashley, "and Joe came through and knocked over the stumps.

"I've often wondered why I did that. It's not easy for a youngster, getting the chance to be in the limelight and turning it down. I just moved out of the way – which probably caused the match to end the way it ended."

It took a while for it to dawn on all that this was a tie, the first of only two in Test history, but once it had, it also became clear that it was a transcendental outcome. "At the end of the day, both teams were in the dining room and the camaraderie in that room was fantastic," said Davidson. "We finally got kicked out at 9 o'clock."

In a way, they never left each other's company. Still now, the names roll off the scoresheet as if from a gilded scroll: Davidson, Sobers, Benaud, Worrall, Harvey, Kanhai, Simpson, Hall, Grout, Gibbs, turn the page. 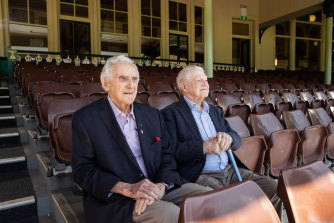 Age and now an ague for the ages divide them – Harvey noted that he had not seen Gibbs since they and Kanhai were inducted together into cricket's hall of fame at the Albert Hall in London in 1999 – but their accomplishments bind them forever, and so does the pride they take in each other's exploits that made their own so much more material and memorable, and uniting them once more this day also were the many screens of Zoom.

A little sidestep can go a long way. Lashley played only four Tests, two on that tour and two in England in 1966, but still cherishes and is cherished. In his final Test, he took his only wicket. The victim said Lashley was the worst bowler to take his wicket in Test cricket, but it sits there in the scorebook – Geoff Boycott, caught behind – like the tied Test, an indelible mark.

Randwick races: Peltzer, Rocketing By land feature double for sire So You Think

India captain Virat Kohli called out for his ‘intimidation’ of umpires