Home » Sports News » ‘A very grateful accidental cricketer’: No armchair ride to the top for Brown

As an up and coming industrial designer, Maitlan Brown’s portfolio is known in Canberra art circles for its creative flair. Her path to the Australian cricket team also requires some imagination.

As a youngster, Brown’s ambition was to become a Matilda, not a Southern Star, as the national women’s team was known back then. Football gave way to hockey. All the while she climbed the ranks of NSW’s underage program only to be dropped from the NSW Breakers’ Academy squad. 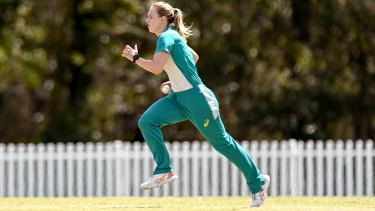 The girl from Wingham, on NSW’s Mid North Coast, then moved to Canberra to play with the ACT Meteors, also spending time in Melbourne with the Renegades. She’s now back in NSW, on the books of the Breakers and the Sydney Sixers.

Her nomadic cricket existence is set to be rewarded in the coming weeks with an international debut in the all-format series against India. 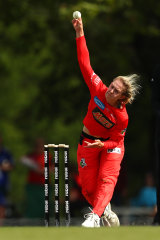 Maitlan Brown during her time with the Renegades. Credit:Getty

The absence of Megan Schutt and Tayla Vlaeminck (for all but the Twenty20s), along with the need to rotate the quicks after quarantine, mean the door is wide open for the 24-year-old seamer to claim an international cap.

Brown is not your average cricketer. For starters, how many players can say they are their state or territory’s Emerging Artist of the Year, or have their work showcased in exhibitions? She also has her own label, Six Stitch Design, a nod to the tools of her sporting trade.

An industrial design graduate from the University of Canberra, her works include ‘Articular Chaise’, a lounge chair made of recycled PET bottles, inspired by the waste she would see littered at music festivals she attended. It featured in Craft ACT’s Emerging Contemporaries Exhibition in Canberra.

Her work received praise from no less than the director of the Canberra Museum and Gallery, Dr Sarah Schmidt, who said her piece showed “creative flair and sensitive design”.

“I’ve always been Maitlan the cricketer, or Maitlan the athlete, so it was really cool to be Maitlan the artist,” Brown says. “It was a completely foreign world. I went to this art gallery for the opening night. It was so different to anything I had been part of.”

Design provided Brown with an outlet from cricket as she recovered from a long-term hamstring injury she suffered last season, just weeks after she had been named in her first national squad.

She has made her own dining table. A well-known Canberra designer commissioned her to produce legs for a coffee table, which she says has since featured at Melbourne’s Design Week.

“I couldn’t play cricket, so it was really nice to have something else to be a part of and feel really welcomed in when I was torn away from being a cricketer for a while,” Brown says.

“If anyone is out there being an elite athlete don’t put all your eggs into one basket, do other things that make you happy.”

Many of Brown’s career choices have been made on enjoyment. She quit football because she no longer liked it. Released from the Breakers Academy after finding it hard to juggle HSC and the long commute from Wingham to Sydney, she stayed in the big smoke to play at grade level for fun.

“I though “if it turns out I get selected in the squad, then that’s great and if not I’ll keep being a waitress in Wingham and just do things I enjoy doing whatever that may be”,” Browns says.

“I wasn’t sure what I wanted to do. I feel like lots of teenagers are in that position when they finish school.

“I really enjoyed playing cricket and was really grateful that I was quite skilful and got selected in teams.

“It really kept snowballing from the NPS [National Performance Squad], Big Bash, making the most of that opportunity.”

Is she an accidental cricketer?

“Maybe, a very grateful accidental cricketer,” Brown laughs. “I was a bit deer in headlights maybe. Whatever I do in life, I do whatever I think is fun. That’s the same with design – I really enjoy doing timber work at school. I like that hands on aspect, creating, that arty side of it.

“All the things I’ve made in uni are because it looks a lot of fun to do, and I have a crack at it. That’s how I got into cricket.”

If her career trajectory continues, Maitlan the artist will have to wait.

“I don’t want to be tied to an employer because it’s a bit slack to commit to something I can’t put 100 per cent into,” Brown says. “I can’t play cricket forever, so I want to do as much of that as I can.”