The Cycling Anti-Doping Foundation (CADF) has said that testing returned to normal before racing resumed last month after it fell sharply during lockdown amid the COVID-19 crisis.

Some teams and riders had expressed concern that they were not tested as much as usual with one elite rider, who declined to be named, saying that testing in 2020 had been "a joke", but the CADF said testing was back to the numbers of 2019.

"From January 1 to August 31, 2020, more than 5000 samples were collected. This represents half the number of samples collected in 2019 for the same period, which is explained by the high number of UCI events cancelled in 2020 due to the COVID-19 pandemic," the CADF said in a statement sent to Reuters. 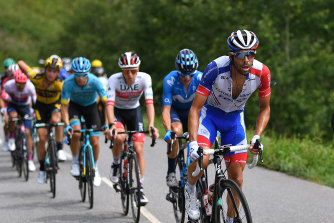 There was a sharp drop in anti-doping tests performed throughout the COVID-19 shutdown. Credit:Getty Images

"Moreover, in 2020, 80 per cent of these samples were collected out-of-competition. In addition, for the period from May to August, the CADF reached the same level of testing in 2020 as in 2019 despite the significant reduction in out-of-competition testing following the announcement of the pandemic.

"This shows that the CADF out-of-competition testing programme in cycling has returned to normal."

France's Thibaut Pinot said in April that his last out-of-competition test was in October 2019.

Since then he was tested "in the week after the Criterium du Dauphine" (in August), his brother and coach at Groupama-FDJ, Julien Pinot, said at the Tour de France.

"But it's true that our [French] riders have been less tested [this year]," he added.

Groupama-FDJ doctor Jacky Maillot declined to comment when asked about the matter.

The CADF, which handles the International Cycling Union's (UCI) anti-doping programme, said it was fully operational.

"We had a lot of elements [information] before COVID, thanks to the biological passport," CADF president Olivier Banuls said.

On the Tour de France, the CADF works hand-in-hand with the French Anti-Doping Agency [AFLD] and the central office against infringements on environment and public health [OCALESP], amid tight safety measures.

"We've had to adapt because of COVID-19," added Banuls. "All our testers have to be tested for coronavirus, but our operations are running as usual. We do a lot of target testing."