Home » Sports News » Argument for another day: Why the men in charge must make women’s Tests longer

The men who run world cricket must give women more Tests played over five days or stand accused of treating female players as second-class citizens.

The Australia-India Test, which ended in a draw at the Gold Coast on Sunday, was just the ninth women’s Test played around the world over the past decade. Five of them have ended in draws, including the past four, and three have involved Australia. 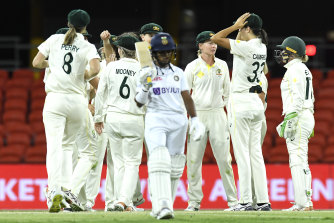 Shafali Verma walks after being dismissed by Georgia Wareham on Sunday.Credit:Getty

Women play 100 overs a day over four days while the men play 90 overs over five days, an extra 50 overs a Test.

Respected ABC statistician Ric Finlay, who founded the Tastats website, highlighted why these extra 50 overs make a crucial difference to the chance of a result.

Finlay’s detailed analysis found that in Australia since 2000, wickets in women’s Tests have been taken at the rate of 64.44 balls per wicket. 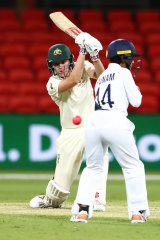 Under the format first pioneered by Australia and England, and now being used in an Australia-India series for the first time, teams play three one-day matches, a Test and three Twenty20 games.

Two points are awarded for one-day and T20 wins, and four points are at stake in the Test.

Australia lead the series 6-4 after winning the one-day series 2-1 and splitting the points for the drawn Test.

Australia coach Matthew Mott is in favour of the format but wants to see five-day Tests for women.

“The five days for me [is the best solution],” Mott said. “The last couple of Tests, we’ve lost a full day of cricket [to rain] so we’re essentially playing a three-day game on a surface that doesn’t have any wear and tear. 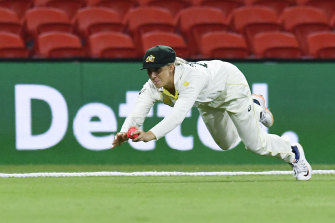 “It is difficult. If this game had gone another day, I think we would have seen a very good Test match. If you’re going to devote that time to it [four days] I don’t think it’s a lot to ask for one extra day.”

The wider debate, which has taken place internally within Australian cricket, is whether the money invested in women’s Test cricket would be better spent having more Women’s Big Bash League matches on free-to-air television.

The WBBL has been a big driver of female participation. The increase in children registered as participants was driven by girls last season, with a 17.5 per cent increase despite the COVID-19 pandemic. For the first time, girls accounted for a fifth of all participants in Woolworths Cricket Blast.

India dominated the Test after batting into the third day and Australia struggled to avoid the follow-on. In the end, not even three declarations, including two on the last day, offered a realistic chance of a result after half of the first two days were washed out.

Mott agreed there could be more debate around the points system for a Test but suggested five-day Tests was the real answer.

“Once it was six points [for a Test], now it is four. Perhaps we need more discussion to take it back to two so that teams are willing to roll the dice a little bit more,” he said.

“We would love to have taken the game on but it’s the chance to give up four points to India as well.”