Lausanne, Switzerland: Australian Ben O’Connor was hurting before the start of stage eight of the Tour de France but walked even more gingerly after an early crash sent some riders flying into roadside trenches on Saturday. 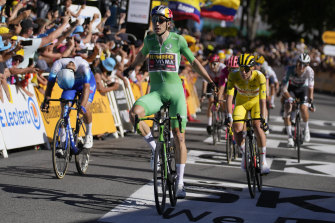 O’Connor entered the Tour in flying form and with high hopes of becoming only the third Australian behind Cadel Evans and Richie Porte to finish on the podium, but crashes have spoiled his chance of achieving that this season.

The 26-year-old speaking before the start of the undulating 186.3km run from Dole in France admitted a crash on stage two had taken more out of him than he anticipated and affected his ability to stay in touch with rivals.

On stage six to Longwy, where Matthews was second to Pogacar, O’Connor lost more time and accepted that his aim to finish on the podium was over.

“I crashed on the second day, and it’s had a recurring effect, a knock-on effect,” O’Connor said in Dole.

“I fell really hard and I hit my hip really badly. I thought it was just a bruise, but it’s turning out to be a bit more than a bruise. It’s painful, but what can you do.”

O’Connor, who entered the Tour on the back of a promising third place at the Criterium du Dauphine last month, had drawn a line through the disappointment of no longer being in contention for the general classification.

“It’s a bit shitty in the biggest race in the world you can’t show what you think you can do, but I honestly think it came down to some bad luck with the crash. I think people really underestimate what falling does to you,” he said.

“It’s just how the first week of this Tour has dealt with me, a bit unkindly.” 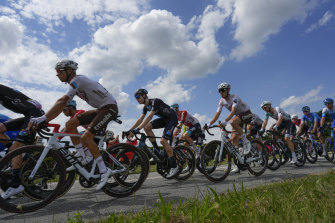 O’Connor believed that with a few more days he could be back at a level to contest stage victories. However, the Perth climber took another hit in Saturday’s crash and winced in pain as he dismounted from his bike outside the team bus at the finish, holding one side of his hip with his hand as he limped into the coach.

O’Connor continued to race after the crash but went back to the race medical car to seek treatment.

He was later taken for scans, but the team said expected to start stage 10.

“He didn’t crash, but someone hit him during the crash,” an AG2R-Citroen spokesman said.

“He didn’t hit the ground, he hit a rider and a rider hit him in the back.”

Kevin Vermaerke (Team DSM) was taken to hospital after the crash where a touch of wheels brought the 21-year-old American down, with riders falling around, on and riding over him. His team is yet to provide a medical update.

Former green jersey champion Matthews has been knocking on the door of victory since the Tour started in Denmark last week, and wanted to win stage eight for his wife, who travelled from Monaco and was waiting for him at the finish line.

For the 31-year-old to be in the mix with Pogacar, 23, who the peloton remains stumped on how to beat, and van Aert, 27 – who has won two stages already and marked a stint in the yellow jersey – speaks to his class. 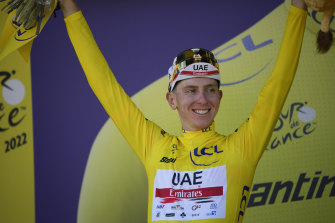 “I think I rode a good race. I don’t think there is much more I could have done,” Matthews said.

“On a finish like that it’s just who has got legs left, and you see Wout, he’s climbing with the best climbers in the world and the long climbs too. I mean, to be second to him, it’s not so bad.”

Matthews headlines the BikeExchange-Jayco team alongside pure sprinter Dylan Groenewegen, who won stage three, and their shared leadership has allowed him to focus on winning on undulating terrain he’s more naturally adept to, and will have further opportunities to nail after the second rest day on Monday.

Asked if he was in his career best condition at the Tour, Matthews said it was hard to say.

“Other years I’ve always been going for the green jersey or hunting for a lot of flat sprints and the hillier stages, so I think this year having Dylan in the team to control the flat sprints, it’s made it a bit easier for me to focus on my ones and really stand out in where I can perform my best,” he said.

Van Aert was pleased with his stage win and the week at the large in which he has asserted dominance on stages and the points classification that he comfortably leads.

“In the first week, everything after the rest day, apart from yesterday, was an opportunity for me,” he said. “That’s five stages, where I won two. That’s crazy stats in the Tour de France.

“Today was on our mind to grab a lot of points in the points [classification], and I have a good margin now and hopefully, from now on, I can grab points here and there and watch my competitors. That’s my plan.”

Pogacar and O’Connor both lost a teammate each before stage seven started, with Vegard Stake Laengen and Geoffrey Bouchard forced to withdraw after testing positive to COVID-19.