Australia have their eyes set on world domination after storming to Ashes glory with a crushing innings victory over a shell-shocked England in the Boxing Day Test.

Not content with the urn remaining on these shores until 2023, skipper Pat Cummins also wants to get his hands on the World Test Championship trophy and re-establish Australia as the game’s pre-eminent team – as they were during his childhood.

If Cummins’ men are to emulate the feats of the champion sides led by Steve Waugh and Ricky Ponting, they must start winning abroad, something they have not achieved since saluting in New Zealand at the start of 2016 under Steve Smith.

Their first challenge will come in Pakistan in March, provided Cricket Australia does not pull out of its first tour of that country in 23 years on security grounds, followed by a mid-year tour of Sri Lanka, where they were thumped 3-0 on dusty, spinning tracks five years ago. 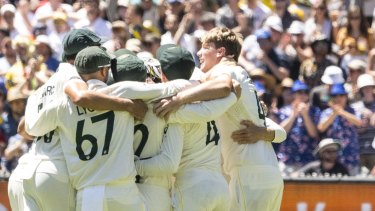 Australia retained the Ashes with a thumping win in the Boxing Day Test to take an unassailable 3-0 series lead.Credit:The Age

After a wretched start to 2021, beginning with a shock series loss to a second-string India side at home, the national men’s team have finished the year on a high, achieving their main goals of the summer – a historic T20 world title and victory in the Ashes after just over 11 days of one-sided play. Greater goals now await in the Test arena, away from the creature comforts of home.

“The Test Championship [is] now a big thing, I absolutely want to be in that final in a couple of years’ time,” Cummins said.

“Winning away from home. We’ve got a great opportunity to go over to a couple of subcontinent tours. I think that’s a big challenge for any Test team.

“You can see England come over here, it’s foreign conditions for them. When Australian cricket has been at its best, the Test cricket side win at home, they have a really good record away.

“As I said, I feel like it’s building. We’ve got a great squad of 15-20 guys we can pick from. We’ve got options for anywhere in the world.”

This is an Australian team that is in its prime, which makes last season’s defeat all the more bewildering. Seven players are ranked in the top 10 in their respective disciplines, led by the top-ranked duo of Marnus Labuschagne and Cummins. They also boast a world-class spinner in Nathan Lyon, who has rediscovered his mojo after a poor season 12 months ago, and a future star in all-rounder Cameron Green.

“When I think of what it means I think more of what it means for our group of players,” Cummins said. “We haven’t probably shown the performances over the last couple of years that we probably expected of ourselves.

“This really consolidates that we are a really good, strong cricket side. As I said earlier, I think it’s a good sign for the next few years.”

For so long reliant on the big three of Cummins, Mitchell Starc and Josh Hazlewood, the side now have a pace cartel the envy of the world.

For so long reliant on the big three of Cummins, Mitchell Starc and Josh Hazlewood, the side now have a pace cartel the envy of the world.

Third-gamer Jhye Richardson announced himself as the next big thing by bowling Australia to victory with five wickets in Adelaide. His replacement in Melbourne, Scott Boland, sealed a fairytale debut by being named player of the match after returning the scarcely believable figures of 6-7 as the hosts steamrolled England for 68.

Selectors now have a major headache heading to the New Year’s Test in Sydney, with Richardson and Hazlewood both aiming to return. There is also the option of blooding Mitchell Swepson as part of a spin twin attack on Sydney’s traditionally turning track before the tours of Asia.

Where that leaves Boland is anyone’s guess. Even the Victorian himself is unsure if he will hold his place in the XI.

“It’s one of those good days as captain that I can firmly say I’m not a selector because good luck to them,” Cummins said.

“I thought it was a really brave call by the selectors to bring in Scotty for this game. Full credit. They’ve made the right call. Good luck for Sydney.

“We’ll wait and see. It’s a luxury at the moment. We’ve got so many fit available players that could step right in, and we know they’re going to do a great job.”