No one is more deeply imbued with the lore and history of Australian cricket than Justin Langer. So, it speaks volumes for the way the national team is trying to evolve that it entered the T20 World Cup with discussion about letting go of the past.

The captain, Aaron Finch led pre-tournament talks about taking the opportunity to lift the one ICC trophy that Australia have never claimed, but also about not carrying history around with the current group. Instead, the call was for self-reliance and clarity – owning your space. 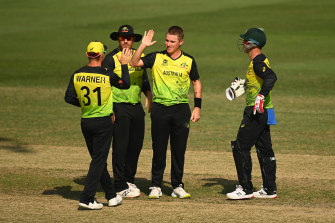 For a seasoned collection of cricketers among whom the vice-captain Pat Cummins is one of the youngest at 28, World Cups in 2021 and 2022 are the chance to add some white ball silverware to what is otherwise a cabinet left bare since the 2015 50-over trophy.

Counter-intuitively, the key to doing so in the semi-final against Pakistan on Thursday night and the final, most likely against England on Sunday night, will be taking those outcomes out of the picture.

“That’s what I’ve been most proud of in the last two games from the boys. We’ve talked specifically about not talking about run rates. We did after we bowled Bangladesh out cheaply, we talked about it then, but we just wanted to talk about our processes, talk about our systems, talk about just staying focused on what we can do right now.

“It’s a silly cliché, but you’ve got to be in it to win it. We had to win yesterday, it was a tense day, we watched the South Africa-England game last night, but we did what we could do, and I was really proud of the way the boys have done that. They’ve played brilliant cricket, despite all the challenges, and we’ve got to keep doing that.”

Critically, Australia now look to have played enough games together for their combinations and plans to be well settled. After flirting with a return to five bowlers in the heavy loss to England that endangered progress from the Super 12, the return of Mitchell Marsh gave Australia stability and, as Langer said, their collective ability is world-beating, provided they are cohesive.

“When these guys were together not that long ago they were the best [T20] team in the world and some of our cricket shows we can be the best team in the world,” he said. “I think England are leading the way at the moment, and we’ve got an exciting prospect, and we’re taking great lessons and confidence from this tournament on how we can continue to play T20 cricket now and moving forward.

“The numbers are telling us most teams are winning by chasing, and you saw with the setup of our side with the extra batsman for most of the games in the lead-up to this semi-final, we’ll back ourselves to chase anything. That said, finals are a different proposition, so we’ll wait and see.”

Pakistan, who count Langer’s former opening partner Matthew Hayden among their support staff, have been incisive with the ball and fearless with the bat in a series of displays on what is, effectively, their home turf.

As for how Langer has functioned at this tournament, surrounded by a larger support staff and a new team manager in Brian McFadyen, he said it had been a matter of following up words with actions.

“We keep evolving, I keep evolving, hopefully I’ve shown over a long time that’s been a trademark of what I’ve done in the game,” he said. “It’s one thing to talk about it, putting it into practice is another thing. We’ve got a great environment here at the moment, a great feeling within the group, playing good cricket, so something must be going right.”