Australia is gambling that Travis Head and Marcus Harris will have breakthrough Ashes series, after choosing both ahead of the proven credentials presented by the more mature Usman Khawaja.

While the selection chair George Bailey has to a degree adopted a “no surprises” approach to the first Test match squad and XI of his tenure alongside a new national team captain in Pat Cummins, he has also opted for potential over proven performance. 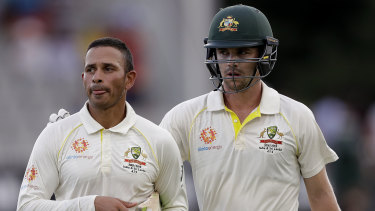 Travis Head has averaged 30 over his past 11 Test matches, but was preferred to Usman Khawaja.Credit:AP

Neither Head nor Harris have ever looked as much at ease in Test match company as Khawaja, who underlined his ability with the innings of the Sheffield Shield so far – a lone-hand 70 on a verdant green Gabba pitch against Jhye Richardson.

However, as the younger two left-handers, Head (27) and Harris (29) offer the possibility of longer international careers than Khawaja (34), who last played Test cricket during the same 2019 Ashes series in which all three struggled against the moving ball.

Few Australian cricketers have had more time invested in them in recent years than Head, who was touted as a future Test pick as a teenager and then thrust into the captaincy of South Australia at only 21.

Head is at the age and level of experience where if he is going to evolve into the top-tier Australian Test batter so many painted him as becoming, he really needs to do so this summer.

The likes of Matthew Hayden, Ricky Ponting, the head coach Justin Langer, Damien Martyn and more recently Steve Smith all got an early insight of Test cricket, struggled, and went back to domestic ranks. All then re-emerged as hardened players who had learned their limitations and became enduring top order players as a result.

In the case of Head, he was lauded by Langer as a “quick learner” during his first stint in the team, which peaked with an innings of 161 against Sri Lanka in Canberra in early 2019, taking his Test average as high as 51.

But over the past 11 Tests he has added only one more century and averaged around 30, as bowlers from England, Pakistan, New Zealand and India successfully corralled him into some impetuous shot choices and ugly dismissals. Joe Root’s tourists will fancy being able to do likewise, as Head’s domestic innings remain blotted by bad decisions.

Similarly, Harris, for all his domestic run-making exploits, has tended to give his wicket away – most often in the gully region – in a fashion that suggests his mental routines are either inconsistent or non-existent. Then there is a tendency to be squared up by the moving ball with his bat not coming through straight, opening up the chance for edges or the plucking of the off stump.

These are not insurmountable obstacles. Hayden was once considered ponderous and vulnerable to top class bowling, Ponting too impetuous with bat or beer in hand, and Langer unable to put pressure on bowlers. All proved such assessments to be incomplete with the benefit of time.

What may be more intriguing is how, without the seasoned figure of Tim Paine, the team rebalances in terms of senior personalities. Khawaja, as an experienced and highly successful captain of Queensland, would have brought a very balanced and reasoned character to the team. His recent elevation to the board of the Australian Cricketers Association, replacing Aaron Finch and joining Cummins, underlined this fact.

In Brisbane on Sunday, Cummins was coy about his role in selection deliberations, making it clear that it had been Bailey and his panel, also comprising Langer and Tony Dodemaide, who broke for Head in the final piece of Australia’s Ashes XI puzzle.

“It was a tight one, obviously the selectors made the call,” Cummins said. “Both really good options, really strong form. I think experience is great from Uzzy, and we’re lucky to have that in the squad.

“But Trav’s been playing a lot for us the last couple of years, and he’s gone away and churned out runs over in England and here in Australia, and we feel like he’s ready to go.”

Khawaja remains on standby, just as he was for the South Africa tour earlier this year. He will be called upon only in an emergency, should Harris, Head and others find themselves groping for the swinging ball in the hands of James Anderson and company.

Verry Elleegant is set to go for George Main Stakes