Karachi: The second Test in Karachi exploded to life on Monday after Australia’s pace bowlers flipped the script by ripping through Pakistan’s top order and dismissing the visitors for 148 in their first innings.

Australia, who decided not to enforce the follow-on despite a record 408-run first innings lead, are on the cusp of a maiden Test win in Karachi if their bowlers can maintain their composure over the final two days. 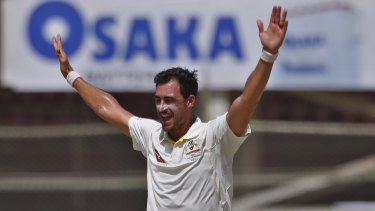 Mitchell Starc (3-29 from 13 overs) almost became the first Australian bowler to take a Test hat-trick since Peter Siddle in 2010 during a dramatic middle session on day three. The tourists triggered a stunning Pakistan collapse, in which the home side recorded their lowest total against Australia in Karachi and fourth worst on home soil against the men in baggy greens.

It was the biggest first innings lead Pakistan has ever conceded from 433 Test matches.

Australia batted again and lost David Warner (7) in the final hour, but finished day three on 1-81, with a 489-run lead.

After a morale-boosting direct run-out from debutant Mitchell Swepson in the morning session, hours before he removed Babar Azam for his first Test wicket en route to figures of 2-32, Pakistan went to lunch at 1-38, still 518 runs behind Australia’s first innings total of 9d-556. 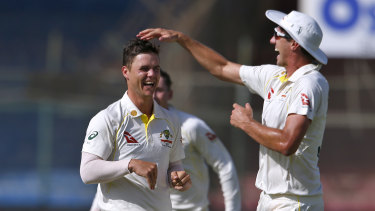 Few could have predicted the carnage that unfolded, after days of attritional cricket in a series dominated by batters, as Australia took 6-52 inside a session to edge closer to a 1-0 series lead.

By tea, Pakistan were in dire straits at 7-100. Australia’s bowlers took six wickets in the middle session, double the tally of the three they had managed so far in the entire series.

Pakistan’s collapse was even more unbelievable given Australia’s bowlers failed to take a wicket in the 619 preceding deliveries before Nathan Lyon removed Imam-Ul-Haq for 20.

From there, five wickets came in 76 balls.

Despite the breakthrough, Pat Cummins took Lyon out of the attack and resisted the temptation to give Swepson more overs in an astute piece of captaincy. His decision to make Pakistan bowl again later in the day was the right call as Usman Khawaja (35) Marnus Labuschagne (37) and rubbed salt in Pakistan’s wounds.

Australia orchestrated their finest session this series as Starc removed first Test century-scorer Azhar Ali for 14, thanks to a tremendous catch from Cameron Green at second slip that flew off the edge, before trapping No.5 Fawad Alam in front with a scorching in-swinging delivery.

When Cummins found the edge of Mohammad Rizwan’s bat for six and Green removed Faheem Ashraf LBW for four, Australia had tightened its grip on the series.

The wickets kept tumbling when Starc had Sajid Khan (5) caught behind for his third wicket before Marnus Labuschagne harnessed the frustration of running himself out for a duck by throwing down the stumps and ensuring Hasan Ali (0) was caught well short of his ground.

Australia was expected to favour its spinners on day three, but reverse swing became a potent weapon as Swepson was put on ice.

However, the moment Swepson had dreamed of his entire life came on ball one of his sixth over.

With Babar well set on 36, the Pakistan captain tried to loft a Swepson leg-spinner that dipped and spun just enough.

Babar was beaten in flight and skied a catch to Khawaja, who ran in and took the chance with great delight.

Australia has never won a Test in Karachi from eight attempts (five losses and three draws) but have ensured that Pakistan will need a miracle to conjure victory.

Earlier, Australia added a quickfire 51 runs from 54 balls before declaring on 9-556.

Swepson’s day began to plan as the No.11 chipped in with an unbeaten 15 before being introduced in the 13th over.

It was a nervous but tidy start, however, the Queenslander’s moment in the hot Karachi sun came the next over.

With Swepson lurking at short third man, Pakistan tried to sneak a single with Abdullah Shafique running to the danger end.

The spinner ran in fast, picked the ball up with one hand, before unleashing a rocket throw that crashed into the stumps with Shafique well short of his ground.

The delight was written all over Swepson’s face as teammates raced towards him to celebrate a moment he will never forget.

BUMBLE ON THE TEST: Saqib Mahmood should have opened on day three