Scott Boland sealed a Boxing Day Test debut to remember, as Australia retained the urn after storming to a crushing win over England on Tuesday.

Another Ashes whitewash is on the cards for the hosts, who wrapped up the series with victory by an innings and 14 runs on Tuesday after the visitors capitulated in the face of a fierce onslaught from Australia’s pacemen.

The newest member of the exclusive baggy green club, local lad Boland had the MCG crowd eating out of his hands as he captured the stunning figures of 6-7 from just four overs, the second best return by any male player on debut in Melbourne and the sixth best by an Australian debutant. 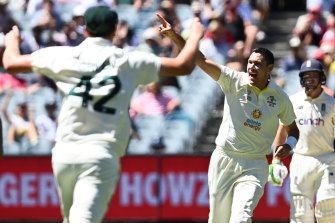 Fittingly, Boland – the second Indigenous man to play Test cricket for Australia – was awarded the Mullagh Medal, named in honour of Indigenous Australian cricketer Johnny Mullagh, for the player of the match.

His performance leaves selectors with a massive headache heading into the fourth Test, with Josh Hazlewood and Jhye Richardson both aiming to return from injury.

All-rounder Cameron Green completed the rout when he breached the defences of No.11 James Anderson, the final man to fall in England’s pathetic total of 68.

Embarrassingly for the visitors, they could not even push the game to lunch on the third day and lost by an innings despite Australia managing just 267 in their first dig. Such was the one-sided nature of this summer’s series, the urn was decided in just 12 days of cricket.

Despite seeing so little play, the crowd of about 40,000 got their monies worth, watching Boland have a day he will never forget.

The Victorian seamer, a shock selection for this game, claimed four wickets from just 11 balls during a scintillating burst, including the prized wicket of England captain Joe Root.

Root has been dismissed six times from as many innings to catches behind the stumps.

When he pouched a sharp return catch from Mark Wood for his fifth wicket, an almost sheepish Boland barely raised the ball to a rapturous crowd in acknowledgment of his milestone.