The end of one of the worst tours in England’s history is nigh. Thank goodness, quite frankly, because to be in Hobart on the second day of the fifth Test was to witness a batting unit that had all but given up.

Joe Root and his players have spoken repeatedly about putting ‘pride in the badge’. It seems clear now they must have been talking about the Australian badge.

England began the day in the field and ended it there too, having been dismissed in between for 188 in 47.4 overs – not quite the equivalent of a one-day innings, and a whole lot less entertaining. 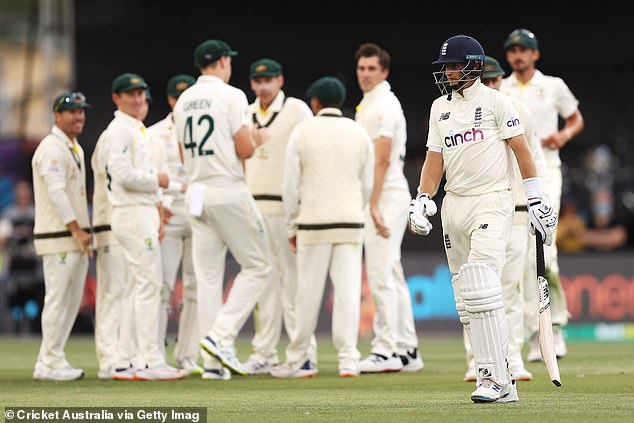 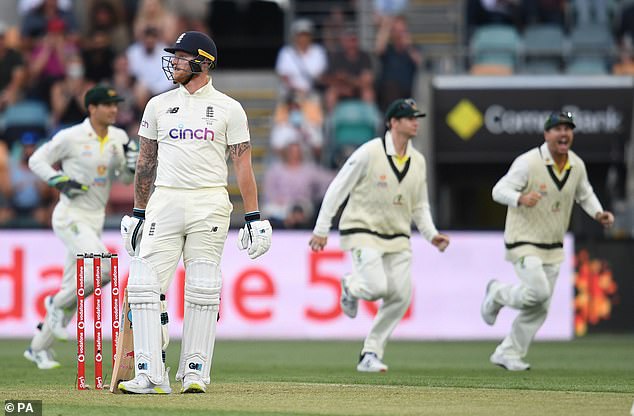 It would be unfair to say this was their most spineless performance of the last few weeks. After all, they were bowled out for 147 at Brisbane, and for 185 and 68 at Melbourne. And there is another innings to come.

But neither was it the response ECB chief executive Tom Harrison was looking for when he suggested before the match that England might like to ‘come home with some positivity around the Test environment’.

With that clarion call ringing in their ears, it was a wonder they were unable to raise their game. Even in the bad old days of the 1990s, England would occasionally win the dead match at the end of the series.

Hobart’s first Ashes Test has offered them no such prospect, other than a mad first hour in which they reduced Australia to 12 for three, then watched Travis Head flay them to all corners of Bellerive Oval. 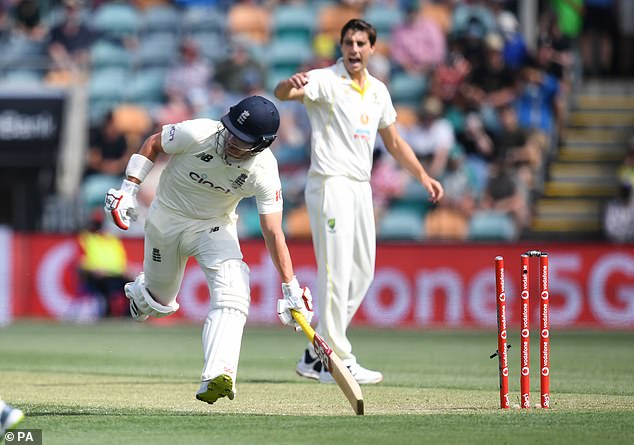 Yet again, England crumbled at the first sign of pressure. Harrison will await an end-of-tour report from the team’s managing director Ashley Giles and the performance director Mo Bobat, but the evidence of his own eyes should be enough to reach some disturbing conclusions.

The most obvious of them is what persuaded Harrison to call for a ‘reset’ of a domestic game he has presided over for the past seven years: with the exception of Root, the players who supposedly represent the cream of English batting have techniques that are fundamentally flawed, and temperaments not quite as solid as that.

It was baffling to witness Rory Burns, on his return to the Test team – and with a career to play for – failing to dive for the crease after he was called through for a risky single by Zak Crawley. Marnus Labuschagne’s throw beat him to it, condemning Burns to his eighth duck in his last 22 Test innings.

Later, Ollie Pope groped repeatedly at deliveries from Scott Boland that wouldn’t have hit another set of stumps, until he finally edged one to Alex Carey. It made you wonder what he has been doing in the nets ever since being left out after the second Test. Even Chris Woakes’s 36, the highest score of the innings, required drops on nought and five. 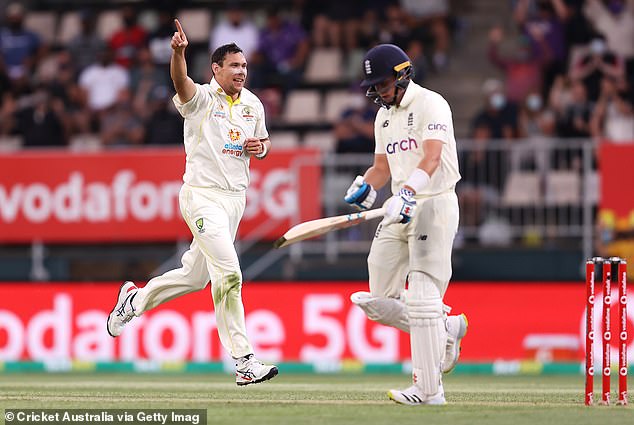 It all meant England were in danger of replicating their nadir of 1958-59 – the only other series of four Tests or more in Ashes history in which they have failed to reach 300. They lost that series 4-0, and face a similar fate now.

Bookending their latest batting implosion on a day of 17 wickets were two decent enough performances with the ball. In the morning, Australia’s overnight 241 for six became 303 all out. Later, in Tasmania’s chilly dark, they closed on 37 for three, including the dismissal of David Warner for a pair, brilliantly caught by Pope at backward point off his old nemesis Stuart Broad.

But the day was defined by the meat in its sandwich – or rather the lone slice of wafer-thin ham. Even before Burns was run out, he survived what the Snickometer suggested was a thin edge in Mitchell Starc’s first over. And it was 29 for two when Crawley was caught via bat and pad at short leg for 18 off Pat Cummins.

Either side of the first interval, Dawid Malan and Root threatened to reprise their partnerships at Brisbane and Adelaide, only for Malan to glance Cummins down the leg side straight into the gloves of Carey. The 25 he made was his best score since the first innings of the second Test. Like many of his team-mates, he looks exhausted; like more than a few, he needs to finish this tour with a score. 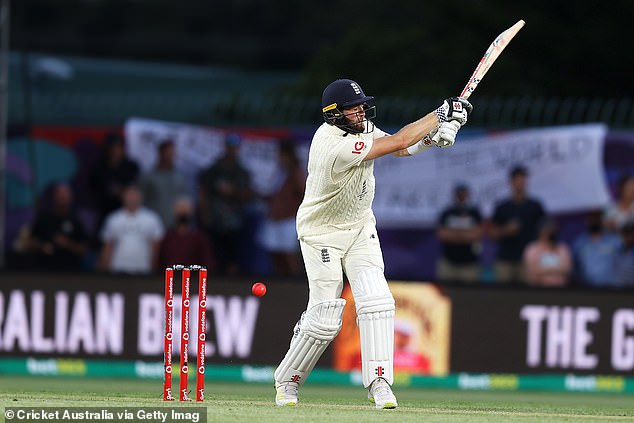 Even Chris Woakes’s 36, the highest score of the innings, required drops on nought and five 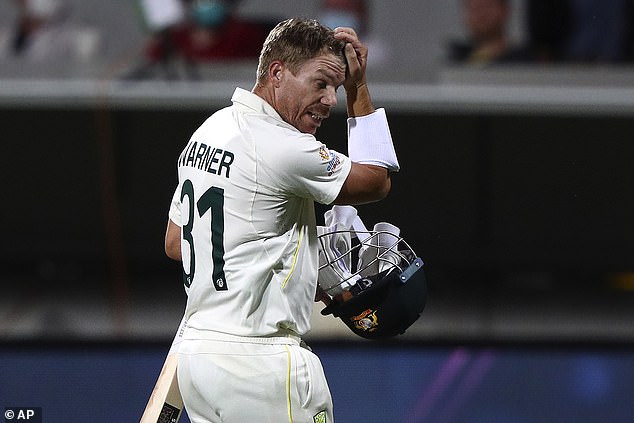 That was 78 for three, and it was soon 81 for four when Root was trapped in front by a ball from Cummins that jagged back and caught him on the crease. England’s captain had made 34 – also his average in a series that had begun with hopeful talk of a first Ashes hundred in Australia, and is ending in familiar disappointment.

Moments later, Ben Stokes squirted Starc towards backward point, where Nathan Lyon dived low to his left: 85 for five, and game more or less over.

Pope’s indiscretion made it 110 for six, but Sam Billings’s maiden Test at least provided a shot of adrenaline, and half a dozen cleanly hit fours. The fun ended with a pull to fine leg, before the last three wickets tumbled for six. It was feeble, but not unexpected.

Australia’s batsmen emerged again with a lead of 115, but lost Warner third ball, to complete his second pair in Tests and his 14th dismissal by Broad. Labuschagne then tickled Woakes down the leg side to make it five for two, and it was 33 for three when Usman Khawaja was unable to sway out of the way of a ball from Mark Wood that brushed his glove.

But nightwatchman Boland survived some hairy moments before the close, which Australia reached with an advantage of 152. It’s hard to see them blowing it from here. 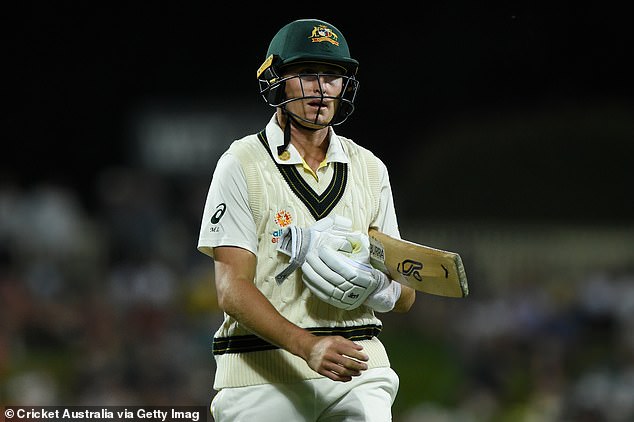 As national selectors pondered who could open for Australia against India, Shaun Marsh didn’t get a call