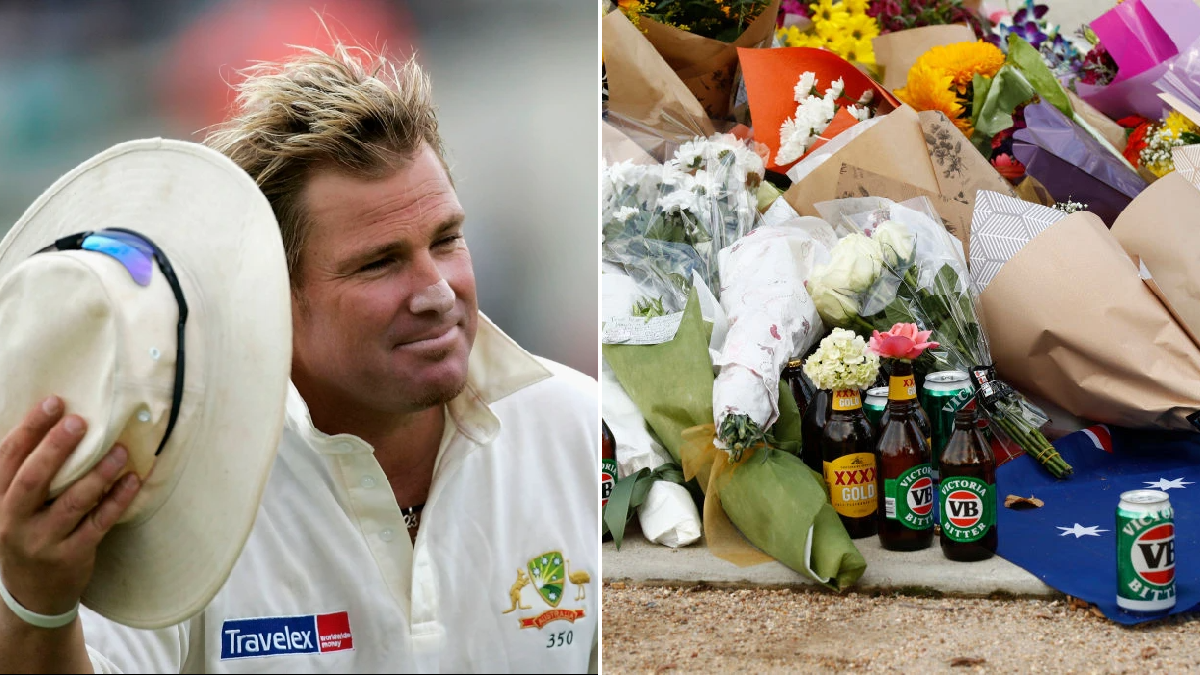 Australia’s cricket teams observed emotional minute’s silences for Shane Warne the day after he died, while fans flocked to the MCG to leave flowers, beer cans, photographs and cigarettes by his statue.

Cricket lost one of its greatest players on Friday as Warne died of a suspected heart attack at the age of 52.

Warne took 708 wickets in Tests, the second most in history, 293 in one-day internationals and 195 in Ashes matches. He was an integral part of one of the best teams of all time and helped Australia win the World Cup in 1999.

Australia and Pakistan men wore black armbands and held a minute’s silence before play on the second day of the first Test in Lahore.

Australia’s women also wore black armbands in their Women’s World Cup victory against England and observed a silence for both Warne and Rod Marsh, who died on Thursday.

Warne was one of the most popular cricketers in the world during his international career and remained a key figure in the game after retiring in 2013 as a commentator and coach.

Fans left a range of memorabilia and items by Warne’s statue at the Melbourne Cricket Ground, where he took his first Test hat-trick and also claimed his 700th Test wicket in 2006. The beer cans and cigarettes were in fond reference to his colourful persona off the pitch.

The MCG also confirmed a stand would be permanently renamed the SK Warne Stand as a tribute.

Australia Test captain Pat Cummins paid tribute to Warne on Friday and said ‘the game of cricket will never be the same’.

‘We are all numbed by the news,’ Cummins said.

‘Shane was a once-in-a-century cricketer and his achievements will stand for all time, but apart from the wickets he took and the games he helped Australia win, what he did was draw so many people to the sport.

‘So many of us in the playing group grew up idolising him and fell in love with this great sport as a result, while many of our support staff either played with him or against him.

‘It has been a terrible couple of days for Australian cricket with the passing of Rod Marsh and now Shane. Our thoughts are with both families and, in Shane’s case, particularly with his parents Keith and Bridgette, his brother Jason and his children Jackson, Summer and Brooke.

‘The game of cricket was never the same after Shane emerged, and it will never be the same now he has gone. Rest in peace King.’

Australia women’s captain Meg Lanning added: ‘Losing Rod and Shane has been very sad, they were two icons of the game who made massive impacts and their mark has been left.

‘It’s a sad time, hopefully we can do them proud today.’

Tributes to a legend.

Former Australia pace bowler Glenn McGrath, who formed a formidable partnership with Warne, described his ex-teammate as the ‘ultimate competitor’.

‘Warnie was larger than life. I thought nothing could ever happen to him,’ McGrath said in a touching Instagram post.

‘He thought the game was never lost, that he could turn it around and bring us to victory, which he did so many times.’

‘There were other great cricketers who when you looked at their records would potentially equal Shane’s or maybe in some cases even better them,’ Strauss said.

‘But there was no greater star in cricket than Shane Warne.

‘And you felt that when you went on the pitch against him – it was his show and you were just a small part of his show. He literally was the greatest showman.’

How to watch Ashes highlights on TV and online