The New Zealander who gave Trevor Chappell a two-finger salute after the infamous underarm incident 40 years ago believes Australia no longer have the fear factor they once did as the two sides prepare for a blockbuster T20 World Cup final between “little brother and big brother”.

It comes as former New Zealand international and popular commentator Ian Smith, who also played in the infamous underarm one-day international in 1981, admitted some New Zealanders might feel a degree of “lingering animosity” towards Australians in general because of the incident, coupled with a desire to seek revenge after a loss in the 2015 World Cup final.

Australia and New Zealand are one polished performance away from claiming a maiden T20 World Cup title when they meet early on Monday morning (1am, AEDT).

The Black Caps have never won a men’s World Cup in either format but came mighty close in 2019 when they were pipped by England in the 50-over final – decided by a boundary countback – four years after suffering a seven-wicket defeat to Australia in the 2015 decider at the MCG. They did, however, win the inaugural World Test Championship earlier this year.

Former New Zealand opener Bruce Edgar, who scored 102 not out in the match where Trevor Chappell bowled an underarm ball at the instruction of brother Greg with the Kiwis needing six runs to tie from the final delivery, says the dynamic between the sides has changed since one of cricket’s most controversial moments.

Australia have won eight of 11 matches in 50-over World Cups against New Zealand, while the Kiwis beat Australia in the only match between the sides at a T20 World Cup (2016). 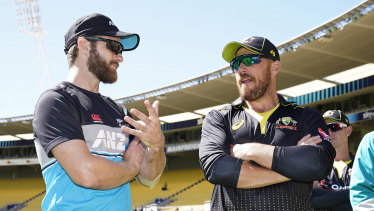 “I think the 2015 World Cup won’t necessarily be front and centre, but it’ll be a piece of history they’ll be thinking about,” Edgar said.

“The Aussies always rated our rugby but never rated our cricket. [Australians would think] ‘We’re better than you guys, simple as that, and we always will be’. Maybe that gap has closed now. The fear factor has gone. It’s a bit like teams playing the All Blacks. It’s equalised a bit more now. It’s time for the Black Caps to settle a score from their experiences in Melbourne in 2015.

“The Aussie mentality in the 1980s was ‘we’ll beat anyone in front of us’. That was a team ethos and it’s always been like that with [Ricky] Ponting and [Michael] Clarke and [Adam] Gilchrist. There are now [New Zealand] players with experience and mental toughness that there has not always been there.

“When [Australia] played us I suppose we were a bit of a nuisance to play. New Zealand started to get a bit of resistance along the way. 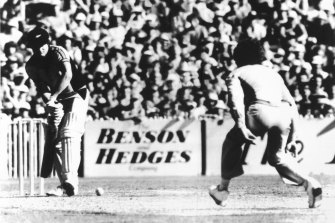 Edgar stopped short of saying a Kiwi win would be revenge for what happened 40 years ago, but conceded it may be in the back of some players’ minds who featured that day when watching on back in New Zealand.

“There might be the odd one,” Edgar said. “They’ll bring it up from time to time, but it’s not the focus. I feel we’ve matured as a nation in a way.”

Meanwhile, Smith, who batted at No.9 in the match in 1981, said New Zealanders would love nothing more than to upset their trans-Tasman rivals.

“I think there’s always a bit of lingering animosity,” he said. “Not so much from the players. There would still be older groups of fans who remember [the underarm delivery] very well.

“Of course they squared off in the 2015 World Cup final on the very same ground [as the underarm game], which we weren’t very good in [Australia won by seven wickets]. We have a lot of expectation and a lot of disappointment but, this time around, there is a great deal of hope we’ll follow through.

“It would be huge. When it comes to the one-on-one [matches] we generally come off second best more often than not. I can’t remember us winning too many. From a personal point … it would be sweet to pull one off. We’ve gone close.

“I’m not sure [emotion] will come to the surface, but I think Australians will feel more comfortable. This is the opposition we didn’t want to play but the opposition we want to beat. It would be very sweet for us.”

Burns has had ‘excellent’ prep for Test, say selectors